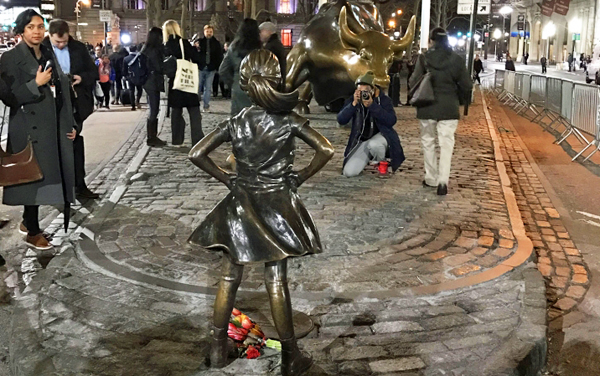 In a letter sent through his lawyer, Arturo Di Modica claims that the new statue violates the Visual Artists Rights Act and illegally commercializes his own sculpture.

The creator of “Charging Bull” is charging its new neighbor with violating his rights. Arturo Di Modica, the sculptor who created and clandestinely installed the 2,000-pound bovine monument to American resilience in Manhattan’s Financial District in 1989, claims the recently installed “Fearless Girl” violates his copyright and trademark, and that it illegally commercializes his work. Through his lawyer, Norman Siegel, he is petitioning the two companies that commissioned the new sculpture from artist Kristen Visbal — financial services firm State Street Global Advisors (SSGA) and advertising agency McCann New York — as well as New York City Mayor Bill de Blasio to have “Fearless Girl” relocated.

“Through ‘Fearless Girl’ — the statue of a young girl facing down a charging bull, State Street Global Advisors exploited the Charging Bull for commercial gains as part of an advertising campaign undertaken without the consent of Mr. Di Modica,” reads a letter sent by the artist’s lawyers to de Blasio, SSGA, and McCann, and forwarded to Hyperallergic. “We request that the ‘Fearless Girl’ statue be removed and placed somewhere else and that damages be awarded to Mr. Di Modica for the violation of his legal, statutory rights.”

Though de Blasio has yet to formally respond to the letter, he indicated his support for “Fearless Girl” last month when he extended its permit through February 2018. The statue was initially installed in front of “Charging Bull” on March 7, the day before International Women’s Day, with a one-month permit. Yesterday, in response to Di Modica’s call for the work’s relocation, de Blasio tweeted: “Men who don’t like women taking up space are exactly why we need the Fearless Girl.”

During a press conference yesterday with Di Modica, Siegel insisted, “None of us here are in any way not proponents of gender equality,” according to the New York Times. Rather, as outlined in the letter, the sculptor and his representatives allege that “Fearless Girl” is not only contingent on “Charging Bull” for its meaning, but actively changes the meaning of Di Modica’s sculpture, thereby violating the Visual Artists Rights Act.

The Charging Bull no longer carries a positive, optimistic message. Rather, it has been transformed into a negative force and a threat. … The inescapable implication is that the Charging Bull is the source of that fear and power and a force against doing what’s right. Plainly, the presence of the statue of the young girl has tarnished and modified the Charging Bull.

Di Modica’s lawyers have also submitted a number of Freedom of Information Law requests to establish whether the city violated its own laws in granting a permit for the sculpture to SSGA and McCann New York. They note that by installing “Fearless Girl” on an extension of the cobblestoned area where “Charging Bull” stands, rather than on the curb proper, the companies were able to go through the city’s Department of Transportation rather than its Department of Parks and Recreation, allegedly making it easier to avoid seeking Di Modica’s approval.

Though the letter professes to want “to amicably resolve these violations,” Siegel noted at yesterday’s press conference, “We never dismiss the possibility of litigation.”

Update, 4/14/2017: On his weekly WNYC radio address, Mayor de Blasio promised to fight any lawsuit filed in an attempt to have “Fearless Girl” removed and further criticized Di Modica’s sculpture. “Let’s be blunt! Charging Bull is a celebration of unfettered capitalism, and I don’t think for lot of people that says it all,” de Blasio said, according to the New York Post. “You can say it is about the spirit of optimism sure, but it is a symbol of Wall Street, and Wall Street to say the least is a double-edge sword.” The comments come in the final two minutes of the mayor’s radio address today.