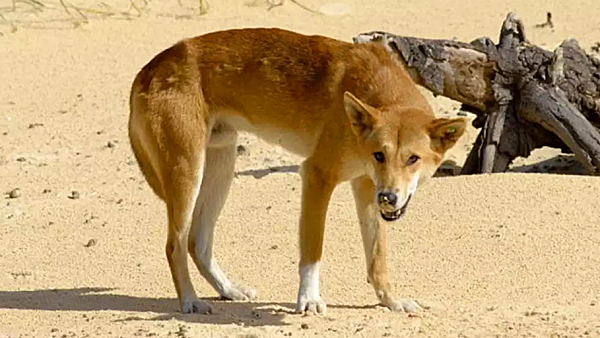 The pure dingo is endangered, following generations of interbreeding with domestic dogs.

Toby Crockford, How a dead dingo from 350 years ago could save species, The Sydney Morning Herald, 4 October 2018

DNA from a dingo that died 350 years ago and was unearthed in the early 1970s could help save the endangered species, a Queensland academic says.

The University of the Sunshine Coast researcher will travel to the US next year to analyse the ancient dingo’s DNA and get the full genomic breakdown of the pure dingo.

USC senior research fellow Dr Subashchandran Sankarasubramanian will make the trip in April to use the Smithsonian Institute’s facilities to analyse the bones.

“One of the big issues facing the survival of the species is their interbreeding with domestic dogs. The situation is so bad that we could very well see the loss of genetically pure dingoes altogether,” he said.

“Given this interbreeding has happened since European settlement of Australia, how do you measure a genetically pure dingo? The answer is to go back before settlement, and, fortunately, our team has access to the bones of a 350-year-old dingo, which provides an excellent baseline.”

Dr Sankarasubramanian said it predated European settlers arriving in Australia, who had been blamed for interbreeding dingoes with domestic dogs.

“We have developed a new technique which enables us to extract DNA from dead animals’ bones,” he said.

“We already have the genome of living dingoes, so once we get the genome of the extinct one, we should be able to confirm that the dingo is pure.

“The genome technique has been discovered very recently, so not many dingoes have been analysed.

“We will compare the ancient dingo with other living dingoes that have already been sequenced and then we will know which dingo populations in which areas of Queensland are purer.”

Dr Sankarasubramanian said the findings would be used by the state government to pinpoint pockets of genetically pure dingoes and ensure they were the focus of protection programs.

Science and Environment Minister Leeanne Enoch said the US trip has been made possible by Dr Sankarasubramanian being awarded a $25,000 fellowship from the state government.

“The Queensland-Smithsonian Fellowship Program presents recipients with a rare opportunity to collaborate with leading researchers at the world’s largest museum and research complex,” she said.

“The fellowship program has been running since 2001, and each year we see recipients coming back to Queensland with a wealth of knowledge to share and experiences to lean on, to the greater benefit of our state.”