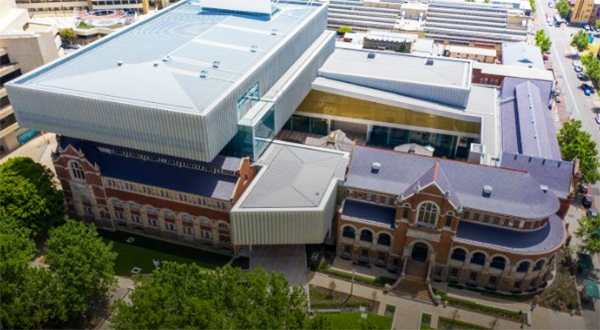 On The Science Show with Robyn Williams.

It’s called Boola Bardip, words from a local Aboriginal language meaning many stories. And that’s what’s inside. The new museum is a blend of 5 heritage buildings with new structures.  It solves long-standing problems with the old buildings and provides vast more space for displays. CEO Alec Coles describes the new spaces and some of the exhibitions.

Robyn Williams: The Science Show on RN where last week we went to our oldest museum, now reborn and opened last Saturday. And after the Australian Museum, let’s visit the WA Museum, already open for two weeks, and doing so very well. Here’s director Alec Coles.

Alex Coles: So the new Museum in Perth is the WA Museum Boola Bardip. Boola Bardip means ‘many stories’ in the local Nyoongar language.

Robyn Williams: ‘Many stories’, absolutely. And I must confess, I have just done a drone tour of the huge museum, and I’m quite giddy by the size, and also terribly impressed by the combination of traditional buildings and brand-new glass 21st-century ones. How did you manage that?

Alex Coles: Well, I’ll have to pay tribute to the architect, Hassell + OMA, for that. They’ve done a fantastic job, and in fact it’s one of the comments that a number of people have made is the extraordinary integration of the old and the new. So we have a series of five heritage buildings spanning a period from about 1850, 1855, up to 1913, and then of course we have all the new build, and they’ve managed to knit them all together quite brilliantly, including for anyone who visited the old site when it was fully functioning would know that it was actually very difficult to navigate around, some of the differences in levels were really difficult.

Alex Coles: You would remember it, going all the way to one end of the building to get a lift and then all the way back down to get a lift to the other bit. Well, now there is a horizontal loop that is a key part of the design that allows you to go right around the building at level one, without ever going up a step.

Robyn Williams: Yes, once I took the wrong turn and I ended up in Fremantle.

Alex Coles: Yes, there’s every chance that was true.

Robyn Williams: How was the opening?

Alex Coles: The opening was fantastic, so on Saturday morning our Premier Mark McGowan and our Minister David Templeman perform the official opening, with largely a number of people who were members of the public who had applied for timed tickets through a ballot because we knew we were to be overwhelmed by the number of people who would want to come in. The great thing is that the government has guaranteed free admission for the next 18 months at least, but we still had to have ticketing, just to control the numbers obviously. We said for this first week we reckoned we’d get about 50,000 people through. Well, we actually had demand for 420,000 tickets.

Alex Coles: Which, as I say, is more people than visited the old museum in a year.

Robyn Williams: Isn’t that incredible. Last week when we had Kim McKay on the radio talking about the Australian Museum, which by an amazing coincidence opened a week after yours, she said she was having free entry, and I think the fact that you are both doing it is a mark of civilisation in these difficult times. Thank you.

Alex Coles: I would agree with that obviously, and I certainly pay tribute to the government at a time when the economy has not been at its best, we’ve had to deal with COVID, but something like this and certainly in Kim’s case with the Australian Museum, and here with the WA Museum Boola Bardip which, as you say, is of such a scale you’re never going to see it in one or two or three or ten visits, you’re going to need to come back and back, and that’s why the free entry is really important I think.

Robyn Williams: I mentioned glass in the beginning and I wasn’t talking only about architecture, I was talking about sponges. The promise was when I did an interview about a year ago with one of your scientists, the promise of those sponges at the bottom of the sea with those metre-long swords of glass holding them to the floor. What does it look like, that exhibition?

Alex Coles: Well actually the sponges are featured in a whole number of places, and there is a wonderful sponge garden which features many, many species. The person you will have spoken to last year is the wonderful Dr Jane Fromont, and actually one of our staff told me the other day they found a lady in front of that who was actually in tears because she thought it was such a beautiful display.

There is a serious side to this, as you will know, Robyn. Sponges in order to maintain their bit of personal space, as it were, it will exude chemicals to prevent other things growing around them, and the medical potential of those kind of chemicals is absolutely immense. So, behind this very beautiful display of sponges, based very much on Jane’s research, there is a very serious story whereby we have a big collection in our research centre, deep-frozen to something like -82 degrees Celsius, and those tissues have been used in all kinds of medical research, particularly in cancer treatment.

Robyn Williams: Isn’t that incredible. The range…I think you can predict what you’ve got there, we’ve talked about some of the water archaeology, you’ve got obviously a separate museum for marine archaeology and the marine side, but you’ve also got representations in your new museum as well as some of the Aboriginal history. What’s that like as a display?

Alex Coles: Well, the great thing about that is it’s not a single display. There is indeed a display which we call Ngalang Koort Boodja Wirn, which means Our Heart, Country, Spirit, which is the first gallery you encounter as you come in, which really provides you with a welcome into the Whadjuk Nyoongar country on which we are based, but then takes us to Aboriginal cultures right around the state, and deals with some pretty contested histories as well, as you might imagine.

But the comment that so many people have made to me is they’ve never actually seen Aboriginal and Torres Strait Islander narratives so deeply and widely woven throughout the whole museum. So there isn’t a single one of the eight galleries where you will not find Aboriginal and Torres Strait Islander voices. And so a great example of that is a gallery called Origins which deals with from the beginning of the universe really, right up to the most contemporary science, the Murchison Widefield Array, part of the Square Kilometre Array radio-telescope. And throughout that gallery there is a wonderful introductory immersive area, local Nyoongar man Noel Nannup narrating stories of the night sky.

If you go round you’ll see one of my favourite places in WA featured, which is Murujuga, otherwise known as the Burrup Peninsula, where you’ve got Aboriginal petroglyphs going back about 50,000 years at least, and yet if you trace the age of these things you’ll start to see marine animals turn up from I guess about 8,000, 9,000 years ago because of the change in sea level. And I always say that’s like a human chronicle of geological time and I don’t think there’s anything quite like it in the world anywhere, and we featured that there because it tells a very important geological Earth story but also an amazing…the longevity of those human stories as well.

Robyn Williams: Well, it’s an incredible triumph really, and I can’t wait to see it, but the only problem is of course it’s slightly more difficult now to go west if you happen to be in another state, let alone another nation, but I’m hoping soon it will be quite straightforward, and I wish you the best of luck with it. I think it’s an absolute triumph, well done.

Alex Coles: Thank you, the work of a lot of people over a long period of time and successive governments here and we are so proud of it. I am so proud of my staff actually, they have had to work at a pace that I don’t think any of us ever imagined before but they pulled it off, and we very much look forward to welcoming you over here when you can travel unfettered.

Robyn Williams: Thank you so much Alec.