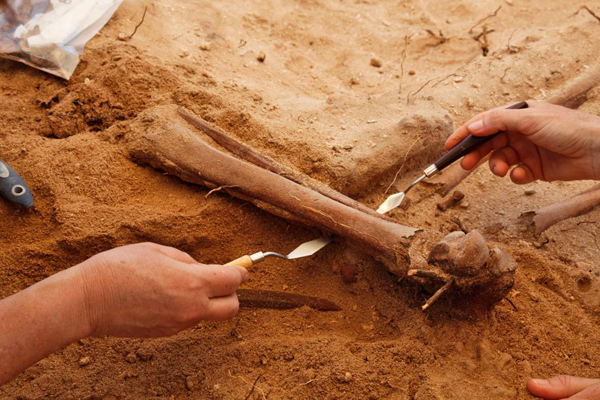 Archaeologists have discovered a new communal grave tied to an infamous and bloody 1629 mutiny of Murder Island.

While other passengers of the Batavia were chucked overboard or beheaded, victims from the latest discovery met a gentler fate.

On an island off the coast of Western Australia, archaeologists have found a mass grave associated with a shipwreck so nightmarishly gruesome, it makes Lord of the Flies look tame.

The grave contains remains of five passengers on the Batavia, a flagship of the Dutch East India Company that sank in 1629 on its maiden voyage from the Netherlands to Java. The bodies, interred neatly in a row and showing no signs of violence, likely died soon after the wreck of dehydration—before madness set in among some of the survivors.

Notoriously, many of the Batavia’s other passengers were murdered by mutineers after the ship ran aground on Morning Reef near Beacon Island. Signs of this brutality abound in other gravesites excavated by archaeologists. One such skeleton belongs to a man missing the top of his skull from a sword blow. His body was unceremoniously dragged into its final resting place.

The Batavia devolved into chaos when the ship’s commander Francisco Pelsaert left some 282 survivors behind on Beacon Island—part of the Houtman Abrolhos, an island chain some 50 miles off Australia’s coast—as he tried to find a nearby source of water. Thanks to horrendous luck, it took him three months to return with help.

In Pelsaert’s absence, a hedonistic merchant named Jeronimus Cornelisz took charge and orchestrated dozens of murders, killing even women and children. His reign of terror ended when some men he had sent to explore other islands overpowered him; upon Pelsaert’s return, Cornelisz and many of his fellow mutineers were executed.

In all, some 115 people died following the shipwreck, many of whom were slain. Beacon Island now bears the nickname “Batavia’s Graveyard,” and some media outlets have taken to calling it “Murder Island.”
“It’s quite a bizarre story, isn’t it?” says Jeremy Green, head of maritime archaeology at the Western Australian Museum, who has studied the wreck of the Batavia for more than 40 years. “I haven’t read anything quite as bad.”

Shining a light on a tragedy

The mass grave findings on Beacon Island, though tragic, offer a rare scientific luxury. Because Pelsaert published his journals after the incident, archaeologists can compare their findings with a detailed historical account. (Read an English translation of Pelsaert’s journals.)

It’s a line of inquiry that scientists have pursued for decades. In fact, Green says that the 1963 discovery of the Batavia prompted Western Australia to pass laws protecting the province’s underwater archaeological heritage—the first laws of its kind on Earth.

While some remains were found on Beacon Island at the time, it took another two decades to uncover more of the Batavia’s victims. In the late 1980s, fishermen on Beacon Island were digging a drain from their bathroom when they stumbled across human bones. In 1994 archaeologists began excavating the site, which contained the bodies of three adults, a teenager, a child, and an infant.

In the years since, archaeologists have kept up the hunt for new gravesites.

“A total of 10 individuals have been discovered in a central part of Beacon Island in the past three years during our research project, providing valuable new information,” University of Western Australia professor Daniel Franklin said in a statement.