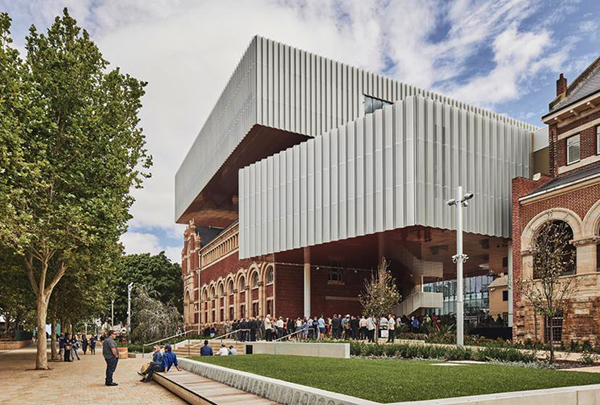 The WA Museum Boola Bardip has taken out architecture’s most esteemed accolade, the George Temple Poole Award, at the Australian Institute of Architects 2021 WA Architecture Awards.

Architects Hassell + OMA accepted the award last night, with the jury praising the new building and restored heritage buildings for being exhibits as much as the museum’s contents.

The jury said the design was a superb facility for West Australians to both understand and celebrate their special place in the world.

The layout of the building — located in Perth’s Cultural Centre on Whadjuk Noongar land — was praised for the way it unfolds in a series of exciting spatial experiences.

The win has prompted speculation the project will soon be recognised globally as a design of national and international significance.

“The museum reflects a care for the shared cultural heritage of all Western Australians.”

“In dealing with the constraints of the site, the architects have made a wider urban design contribution, providing vital activation and renewal of the Perth Cultural Centre.”

The WA Museum Boola Bardip also took out the John Septimus Roe Award for Urban Design and The Jeffrey Howlett Award for Public Architecture, as well as a Commendation in the Heritage Architecture and Bluescope Colorbond Steel Architecture Categories. 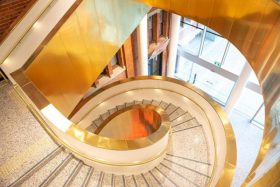 Both the Strawberry Hill/Barmup Visitor Orientation Hub, Albany by PTX Architects, and the Warders Hotel and Emily Taylor restaurant by Matthew Crawford Architects were recipients of Architecture Awards in the Heritage category. 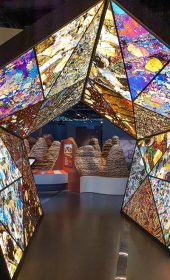 A kaleidoscopic tunnel in the Origins gallery at the WA Museum leads to a scale model of the Bungle Bungles. Credit: William Yeoman/The West Australian

EZONE UWA by Hassell received The Hillson Beasley Award for Educational Architecture, as well as an Architecture Award in the Sustainable Architecture category.

Bilya Marlee UWA by Kerry Hill Architects was awarded the Julius Elischer Award for Interior Architecture, with the jury impressed by the design team’s engagement with cultural adviser and Noongar Elder Richard Walley OAM through the design process to inform and respond to the knowledge systems of Western Australia’s Indigenous people.

“From revitalised heritage buildings to unique accommodation and inspiring educational hubs, there’s been consideration of people, history and cultural heritage throughout the designs,” he said.

“The rejuvenation of buildings and places in both metropolitan and regional areas has created memorable experiences which honour our rich history – with WA Museum Boola Bardip an exemplar of carefully conceived design making an enormous contribution to the state.”

All Western Australian Named and Architecture Award winners will progress to the national awards.