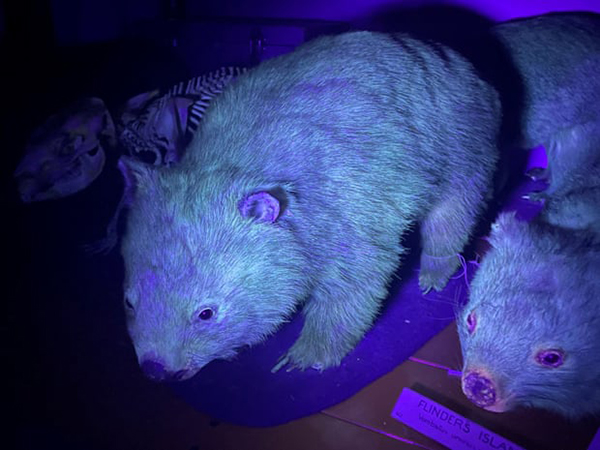 Graham Readfearn, ‘The platypuses were glowing’: the secret light of Australia’s marsupials, The Guardian, 19 December 2020

The discovery that bilbies, bandicoots, Tasmanian devils, and echidnas emit bio-fluorescence under UV light has sparked the burning question. Why?

Dr Kenny Travouillon turned off the lights and headed straight for the shelf holding the stuffed platypus, armed with an ultraviolet torch to test something out. Would the monotreme glow?

“All the platypuses were glowing,” says Travouillon, the mammals curator at the Western Australian Museum in Perth. “We went through with other mammals and we found they were glowing too.”

The museum’s stuffed mammal collection has about 65,000 specimens of roughly 800 different species, including all of Australia’s many marvellous and occasionally oddball animals.

Under the UV light, creatures including bilbies, bandicoots, wombats, flying foxes, microbats, Tasmanian devils and echidnas all took on a distinct disco-like glow. Kangaroos, though, were “rather disappointing”.

Travouillon’s urge to point a UV torch at his specimens was sparked by a scientific paper in October in the journal Mammalia and later reported in the New York Times.

Researchers had shone a UV light at two stuffed platypuses collected from Tasmania – one dating back to 1889 – and kept at the Field Museum of Natural History in Chicago. The animals glowed back at them.

Now scientists are asking why. Was the glowing fur an evolutionary leftover, or was it somehow useful for Australia’s marsupials and other animals? 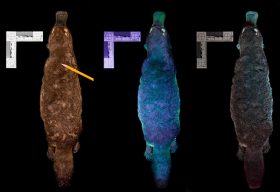 Monotremes are a curious order of egg-laying mammals that live only in New Guinea and Australia – the platypus and four species of echidna.

Their fur glowed green and cyan under different UV lights that shine at different wavelengths. This, the researchers said, was “the first report of bio-fluorescence in a monotreme mammal under UV light.”

But a few months earlier, zoologist Linda Reinhold was out in the tropical rainforests of north Queensland looking for glowing fungi. In the newsletter of the Queensland Mycological Society, Reinhold said she’d found 14 species that fluoresced under her UV torch. But she was also looking for something else.

“Realising that the marsupials were too skittish for fluorescence photography, I spent three days looking for roadkills,” Reinhold wrote. 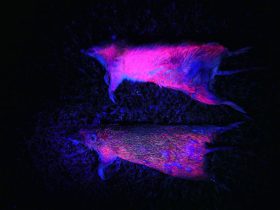 Roadkill that has been lit with a UV light. Photographs: Linda Reinhold. 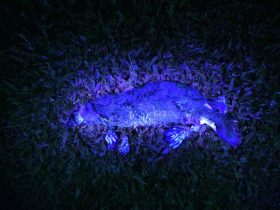 On a road beside a field she found two dead northern brown bandicoots. To the human eye, they were a dull and lifeless brown. But under her UV torch the corpses were a parade of pinks and yellows.

In another spot, an expired platypus turned purple and green under the torch. 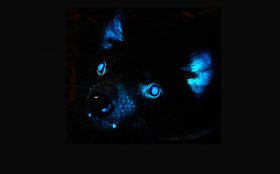 If the bio-fluorescence was simply an artefact of the chemicals used to preserve the stuffed animals, then the fur of Reinhold’s roadkill wouldn’t have lit up, nor would the fur of live Tasmanian devils at Toledo Zoo – another institution that became curious with a UV torch.

One answer could lie in research carried out almost 20 years ago and started by Prof Lyn Beazley, a celebrated neuroscientist who was the first woman to take a chief scientist role when she won the post in Western Australia in 2006.

In the early 2000s, Beazley was researching the vision of honey possums and fat-tailed dunnarts. In one study, they found these two species both possessed cells in their eyes that would give them the ability to see UV light.

But in a further study, Beazley and colleagues put dunnarts into a maze and tempted them with crickets and mealworms using UV light to see if the animals could actually use the ability. They could.

“It was huge fun,” says Beazley, of Murdoch University. “They knew there was no reward with the other colours. To them it was like seeing a Macca’s [McDonald’s] sign – there was going to be a reward there.” 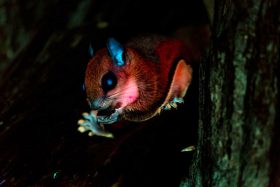 Beazley and colleagues had established that these tiny mouse-like marsupials were able to see in UV and use that ability in the real world – something the mammals reading this story can’t do.

“What’s pretty clear is that most animals can see UV. But we can’t,” Beazley says.

“Fish, amphibians, birds … but it was the mammals that lost out and that was why we were so fascinated that marsupials could see it.

“We’re interested in it as humans because we can’t see it, but for animals it’s just there.”

Beazley thinks it could have a multitude of uses in the animal kingdom.

Rodent urine, like human urine, glows under UV light but birds of prey don’t need a UV torch to see the trail of pee that can lead them to a juicy meal. They can just see it.

L-R A Bandicoot and a Galah under UV light. Photographs: Western Australian Museum.

Beazley says some animals that have areas on their bodies, such as fur or skin that emit light in the UV wavelengths can use it to deliver cues to potential mates or rivals.

With the animal kingdom awash with UV that humans can’t see, the UV patterns and colours could have a whole range of uses that are difficult for humans to understand, she says.

For animals like the platypus, which are active at dusk and dawn, she says the ability to distinguish colours could be vital for searching for food or avoiding predators.

Honey possums’ vision is particularly attuned to wavelengths around the colour orange, Beazley says, and that could help them get to their favourite banksia flowers just as the nectar is ready.

All of this UV curiosity has kickstarted more formal scientific endeavours seeking answers to key questions.

Reinhold, from Cairns, tells Guardian Australia she is starting a university research project in 2021 loosely titled: “Fluorescence in mammals: Prevalence and causes”.

At the Western Australia Museum in Perth, Travouillon has been sharing pictures of glowing Australian animals on Twitter but hopes for a more formal scientific publication next year. 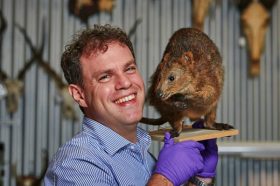 He’s going to be working with Prof Simon Lewis at Perth’s Curtin University who leads research on forensic crime scene techniques, including the use of different light sources.

Travouillon does have a word of warning for members of the general public keen to undertake their own investigations into the secret light of animals: don’t shine a UV torch near their eyes, it could harm their sight.

• This article was amended on 21 December 2020 because for some animals, the ability to distinguish colours could be vital for avoiding predators, not for avoiding prey as an earlier version mistakenly said.

See also: Platypuses Glow Under Blacklight. We Have No Idea Why