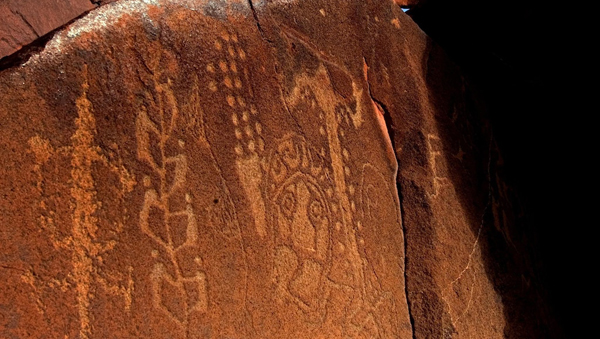 The fraught question of whether industrial emissions are damaging ancient Aboriginal rock art on the Burrup Peninsula could soon have solid answers if a planned research project aiming to bring together an interdisciplinary team of scientists from around the world can get off the ground.

A series of conservation groups led by Friends of Australian Rock Art and the University of WA’s Centre for Rock Art Research and Management, and supported by the Western Australian Museum and Conservation Council of WA, are working to assemble a research team made up of scientists specialising in areas including archaeology, geology and geochemistry, as well as traditional owners under the planned Murujuga Rock Art Conservation Project.

Its proponents hope the project will allow them to monitor cumulative industrial emissions on the Burrup and any changes to the area’s ancient Aboriginal rock art, as well as model the future effects of emissions and recommend measures to mitigate the damage.

Project leader and scientist John Black said an independent and thorough scientific assessment needed to be done on the Burrup to determine conclusively what impact emissions were having.

“It’s essential to know whether industry is dissolving the rock art, and until this project is done or those measurements are made, we’re speculating,” he said.

“We’re speculating on sound chemical principles… but it’s still speculation and we don’t know the causes.”

Dr Black said he believed the project would be the most thorough of its kind in the world if it went ahead and had attracted a lot of research interest so far, with at least 10 scientists already lined up to participate.

FARA co-convenor Judith Hugo said the group hoped the study would be a “watershed” that would prompt the State Government to impose stronger regulations on industry in the area.

“We’ve started it because we really want to prove once and for all that there has been serious damage done to rock art and any further industry will compound this and make the problem insurmountable, and therefore it’s very important that they not only not allow any further industry but also that they control what’s already there,” she said.

“The research done so far by John Black shows there is damage that’s been done but we need to have final tangible proof to prove to government how absolutely urgent this is, that it be further regulated.”

The project’s four-pronged strategy would involve analysing deposits on rocks, microbial growth, acid formation and atmospheric chemicals around the Burrup, which has more than one million rock art carvings up to 40,000 years old.

Project proponents have so far raised enough funds to approach the Australian Research Council for a matching grant, but are still seeking approval from Murujuga Aboriginal Corporation which represents the five traditional owner groups of the Burrup.

If they receive the grant to go ahead, the project is expected to run for at least five years and cost about $500,000 a year.

It has also attracted State Government interest as a process which could inform their under-development Burrup rock art monitoring strategy.

“Information from both previous scientific studies and new research on the rock art will help inform implementation of the State Government’s Burrup Rock Art Strategy by ensuring there is a scientifically rigorous approach to the monitoring program,” he said.

“This will provide a robust basis for the management of impacts to the rock art.”

MAC acting chief executive Peter Jeffries said while they welcomed the interest of other groups, traditional owners needed to be at the heart of any process to protect the Burrup.

He said they would “welcome and invite” project members to sit down with MAC members for a meaningful discussion on the idea.