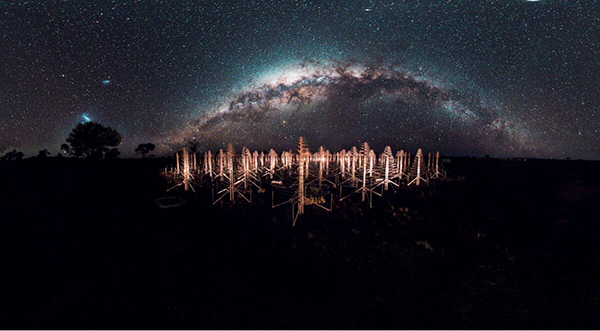 ‘Beyond the Milky Way’.

White Spark Pictures explores Western Australia’s role in one of the biggest scientific endeavours ever undertaken in a new VR documentary set to premiere next month.

Narrated by Brian Cox, Beyond the Milky Way takes a deep dive into the international effort to build one of the world’s largest radio telescopes.

WA’s Murchison Shire was chosen, along with South Africa’s Karoo region, as the site of the Square Kilometre Array (SKA) project, with construction set to commence next year.

Beyond the Milky Way was shot at the remote site set to house the telescope, which is expected to initially comprise 512 stations arranged in a large core with three spiral arms, spread over 65 kilometres. Each station will contain 256 individual antennas, representing more than 130,000 antennas in total. When completed, the SKA will allow astronomers to see further back in time than ever before via unrivalled scope in observations.

The 25-minute film will also take audiences on a tour of CSIRO’s Murchison Radio-Astronomy Observatory (MRO) and hear from the people using the world-class instruments already at the observatory, as well as the astronomers who will use the SKA in the future, and the Wajarri Yamaji traditional landowners. 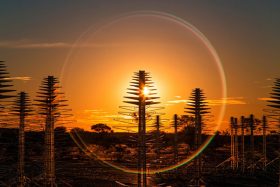 ‘Beyond the Milky Way’ examines the international construction effort to build the world’s largest radio telescope.

Filmed with specialised 360-degree cameras capable of extreme resolution, Beyond the Milky Way is White Spark Pictures second outing in VR following 2018 The Antarctica Experience, which has grossed more than $1 million.

The film will also utilise Surround Sync – a VR concept created by White Spark Pictures that allows for 7.1 surround sound in more than 200 headsets at any one time and can be scaled to suit different venue sizes.

White Spark Pictures founder and creative director Briege Whitehead said it meant a lot to have the backing of relevant organisations.

“The SKA is a ground-breaking, truly international project, and I am honoured that these leading scientific institutions have put their trust in me to share their endeavours with the world,” she said.

“This new immersive VR film will allow a wide range of people to virtually experience this landmark project before construction begins, and look into the future at its immense potential. It will also give people a chance to explore a remote and extraordinary part of the world which few will ever visit.”

Western Australian Museum CEO Alec Coles, who also worked with Whitehead on The Antarctic Experience, expected the film to resonate with audiences in the state.

“The SKA may be an international collaboration, but the Murchison Radio-Astronomy Observatory, which is such a critical part of it, is right here in WA,” he said.

“It is a story that features prominently in the WA Museum Boola Bardip, and so it is totally appropriate that Beyond the Milky Way should be launched here.”

Beyond the Milky Way will premiere to the public at the WA Museum Boola Bardip in Perth on December 11.