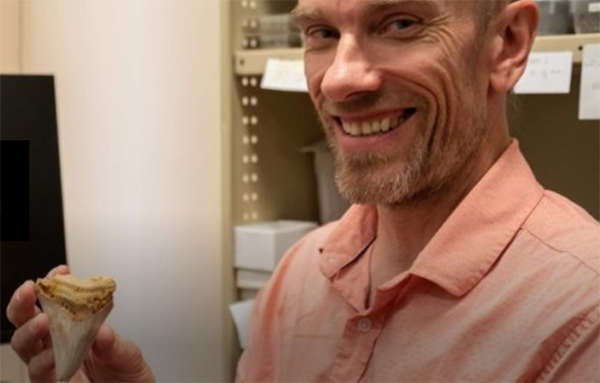 The team from the West Australian Museum had only been on the ground for five minutes when they made their first fossil discovery.

It was a tooth from a Carcharocles megalodon, a giant predatory shark that roamed the ocean until its extinction about 3.5 million years ago.

The rocks in Cape Range National Park, near Exmouth on WA’s north-west coast, are around six to 10 million years old and once formed an ancient seabed.

Palaeontologists are finding the area to be a rich source of fossilised shark teeth.

“Not only did we find teeth of megalodon, we found teeth of other sharks as well and we just kept finding until the last day,” said Mikael Siversson, the museum’s head of Earth and planetary sciences.

“Essentially we’re just scratching the surface — I reckon when it comes to these megalodon teeth, there would be thousands exposed on the surface because it’s a huge area.” 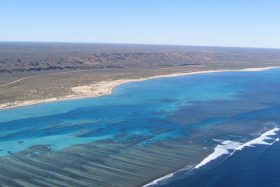 Millions of years ago, Cape Range National Park was part of the seabed. Supplied: Tourism WA.

Exmouth was once a feeding ground for giants

While there was no whole skeleton, he was able to estimate its size from the teeth and modelling the size of the jaw — he said an adult could have measured up to 19 metres long.

“A megalodon of 19 metres, depending on how chubby they were … we are talking about 50 or 60 tonnes.”

They were once considered to have been an ancestor of the white shark, but are now thought to be only distantly related. 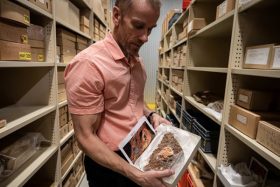 Dr Siversson with one of the megalodon specimens inside the museum’s vault. ABC Radio Perth: Emma Wynne.

Dr Siversson said the plethora of teeth at Cape Range initially led him to speculate the area could have been a nursery, but they determined the teeth mostly belonged to adult sharks and it appeared to have been some sort of feeding ground.

“It’s quite likely, given the surprising abundance of these megalodon teeth, that there was something that attracted them, probably seasonally,” he said.

“When you are 10 to 15 metres long, there is not much that can sustain you — you can’t be chasing sardines.”

Long period of acid digestion ahead

While the teeth were straightforward finds, separating them from the rock in which they’ve been embedded for millions of years is another matter.

“Unfortunately in the area we were looking at, the limestone had been probably dolomitised,” Dr Siversson said, explaining the stone was extremely hard.

He estimated it would take around a year to dissolve the stone surrounding the tooth. 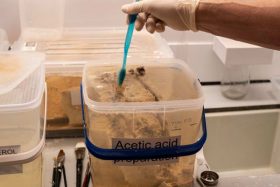 The teeth must be carefully removed from the rock. ABC Radio Perth: Emma Wynne.

The process is done with great care under a fume hood in the museum’s acidic digestion room, using acid that is just the right strength.

“You have to be patient and you have to know what you are doing, because you have to keep an eye on the pH level if you don’t want to damage the tooth,” he said.

“We will get them out eventually, but it will easily take a year.”

In the meantime, the researchers are excited about the possibility of more discoveries at Cape Range, where the abundance of fossils was surprising.

“It’s quite amazing that you can walk across what used to be seafloor seven to 10 million years ago and find the fossils of long-gone beasts,” Dr Siversson said.

“We have this huge outcrop of ancient seafloor full of teeth of these magnificent beasts.

“It’s seemingly one of the best places in the world to explore for megalodon fossils.

“We will go back there again, probably on an annual basis, because we have just scratched the surface when it comes to finding these specimens.” 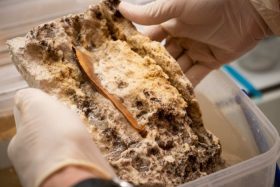 Dr Siversson also cautioned the public not to go on their own fossil-hunting expeditions.

“It is illegal to collect fossils in the Cape Range National Park, but we applied for a permit and that was approved,” he said.

Two years ago a megalodon tooth was stolen from the park.

“We worked out a deal with the Department of Parks and Wildlife that we can remove up to a third of specimens that we found,” Dr Siversson said.

“About half of those specimens will go back so they can put them on display in the visitor centres in Exmouth and within the national park.” 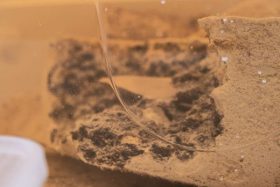 Get the pH levels wrong and the tooth will dissolve along with the limestone. ABC Radio Perth: Emma Wynne

Magnificent beasts of the ocean

Despite being the subject of horror movies like 2018’s The Meg, the ancient sharks would not have posed a huge threat to humans, according to Dr Siversson.

“Even if megalodon was still around, by and large you’d be pretty safe going to the beach,” he said.

“Certainly from adult megalodon sharks, because in order not to beach themselves, they would need at least four to five metres of water depth.

“But then you would have the juveniles — a newborn megalodon would be three metres already.”

Even to modern-day sharks, human are not ideal prey, he said.

“We are a bit too bony and [wear] clothing and all that … white sharks prefer something high-calorie; seal or whale blubber would be ideal.” 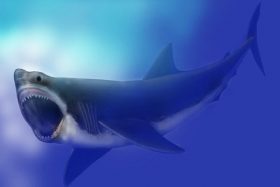 An artist’s impression of the now-extinct megalodon, which was 15 metres long. Supplied: CSIRO.