You are here: Home » Articles filed under: 'News' » Article: 'WAM to re-open and redefine standards'

WAM to re-open and redefine standards 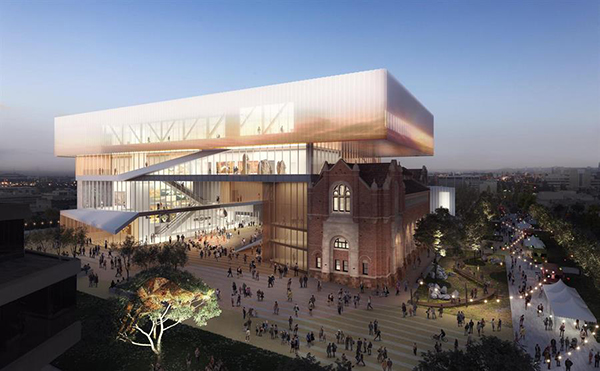 With a budget of almost $400M, the transformed WA Museum not only looks light and open, but champions a new era of museums that are transparent, inclusive and environmentally conscious.

It was in 1997 with the opening of the architect Frank Gehry’s Guggenheim Museum Bilbao that a new phenomenon was born, what has become known as ‘The Bilboa Effect’.

Essentially, it referred to destination architecture that drew tourists in their herds to experience a building, and in turn their collections. What followed was a new generation of cultural institutions worldwide redefining themselves through a more 21st century lens of engagement.

Arguably, the latest to join this league is the new Western Australian Museum, scheduled to open in November this year, and created by Hassell + OMA, a collaboration between the Rotterdam-based firm founded by Rem Koolhaas, Office for Metropolitan Architecture (OMA) and Hassell, an Australian firm with an international footprint with branches in Asia, UK, and US, along with managing contractors Multiplex.

Alec Coles, CEO of WA Museum told ArtsHub: ‘What we are about is it trying to bring more people’s experiences into the museum – not just as visitor numbers – but their opinions and stories.’

Construction of the new building began in 2017, and has quickly found its signature in the city landscape – its light airy modernist structure hovering over, and framing, four historic buildings.

On time, and on budget to date, Coles said of the almost $400 million project: ‘There’s a lot of pressure on at the moment, now that we have locked in the opening dates. You can’t pretend it’s not stressful, but you have to enjoy it. I tell my staff, even if you live five lifetimes, you still probably wouldn’t have the chance to be part of a project like this, so be proud and vigilant to give the people of WA the museum they deserve.’ 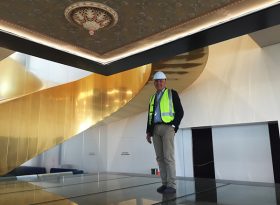 CULTURAL RESPONSIBILITY WITH AN ENVIRONMENTAL EMPHASIS

When building a museum of this scale, there is a responsibility to not only plan systems of care into its cultural custodianship, but also its environmental footprint.

The museum has taken that lead by integrating – and financing – a Central Energy Plant (CEP) that will deliver a sustainable and energy-efficient system for the major institutions in the Perth Cultural Centre, including WA Museum, State Library of WA, Art Gallery of WA and State Theatre Centre.

Reductions to carbon emissions and energy use are expected to reduce by up to 40%.

Coles said that it is a challenge for collecting institutions globally to be environmentally savvy, given their strict conservation conditions for the display and storage of collections, one that is perhaps exacerbated with the hot temperatures of Perth.

‘We absolutely take on this responsibility,’ Coles said. This contemporary lens to new practice, also extends to the narratives the museum embodies.

Among the eight major galleries, the Change Gallery, will examine different impacts on the environment from original fire stick farming, up to intensive agricultural practices today, mineral extraction, fishing, to petrochemicals, and of course global warming, explained Coles.

PROGRAMMING IN A POST-TRUTH ERA

Getting the tone of the narrative right is so important today, in what Coles describes as a post-truth era.

‘Probably the greatest asset museums have is the trust that publics place in them in this post-truth era – to have some where they can come back to and believe in, is important. How do you achieve that? You make a commitment to represent many voices,’ Coles told ArtsHub.

Coles believes that designing a new museum for our fast-moving future is not only about the physical space but the intellectual space that has to be carefully considered and mapped. ‘To date we have consulted with over 50,000 people, including much work in regional and remote areas, and about 70 different Aboriginal language groups.’

‘We will be telling some difficult stories here, about Aboriginal dispossession and climate change, for example. We will not gloss over those things.’ Coles holds the view that while the curator’s role is to assemble stories, they also have to hold an opinion themselves.

‘People sometimes talk about museums as neutral spaces. Who would want to be banal and neutral? Anything you put on display is the result of someone’s decision – the decision to collect and to display it in a particular way. The issue is to do that responsibly so that it encourages debate and allows other views,’ said Coles.

Perhaps best illustrating this in the new museum is the Reflections Gallery, which examines the history of Western Australia, largely but not exclusively, from post-colonial narratives through to new stories of immigration to the refugee experience.

‘With many voices you get different interpretations or memories of the same story. We wanted to get away from the idea of one curatorially mediated view of the world,’ he told ArtsHub.

In a less traditional move, the new galleries have been organised thematically, rather than along national history timelines.

‘The world isn’t organised the way museum curators organise things – it is a bit more holistic – so I think that is the right way to look at things. I don’t think it’s a radical way, but it is a modern way. One of things we have to do is make sure our visitors come on that journey with us, as they will be looking for the Butterfly Gallery and the Dinosaur Gallery.’

There is also a 1,000 sqm dedicated temporary exhibition space for world-class touring exhibitions, which has the capacity to remove a wall to crane in say … a boat, should one desire. 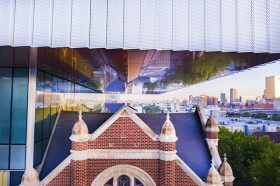 INTERSECTION OF OLD AND NEW

Writer Stephen Todd states: ‘Adaptive reuse is on trend these days.’ If WA Museum was to be a sounding rod then it is not only on trend, but trailblazing.

The site – largely a city block – corrals together under one roof four historical structures: the Old Gaol built in 1855; the original WA Museum building — the Jubilee Building built in 1899; the original Art Gallery, built in 1908; and Hackett Hall—the State Library reading room built in 1913.

The architects have managed to seamlessly integrate the four buildings, which all sat at different levels, restoring them to acidulous heritage standards.

This fusion of old and new is perhaps best captured in the north corner of the building where a seemingly translucent modernist structure hovers over Hackett Hall – a zip of space between the two capturing Perth’s skyline.

It reads metaphorically as a transference of weight between a colonial past and the narrative of our contemporary future. It arguably will become the most photographed site in Perth.

‘I hate the word iconic, but I believe this architecture is the most significant building in Perth right now, and the way in which it hovers over the old Hackett Hall building and frames it, I think says a lot visually. It captures that sense of space that is WA, with its massive skies and distance.’

Coles continued: ‘There are so many motifs to this building, like the gold band that runs around it and picks up a reference to the gold mining industry, and the shifting levels of the visitor journey characteristic of the sedimentary geology of WA.’

The building is skinned with a perforated steel sheeting which cuts down heat load, while allowing light to flood into the building, and projections on the façade if desired.

Further suturing old and new are a suite of stunning staircases – three brass spiral staircases, a major escalator shaft that dissects the building playing off its gorgeous angles and again shouting ‘space’, while a heritage staircase at the southern end of the building has been restored to glory, complete with one whole wall of the building removed and replaced by glass to flood it with light.

Another quirky element is the way the new building literally wraps around, and pops the lid on another heritage hall – its elaborate plaster ceiling raised up so people can lean over and look down into the past.

Overall this can only be described as a democratic project at every level, each edge of the site opening up to the street and allowing pedestrian thoroughfare, while creating an outdoor City Room for events. It is light and open – physically and metaphorically – and we expect will become a case study globally for a next generation of museums that are more transparent, inclusive and environmentally alert.

SOON TO BE ANNOUNCED: