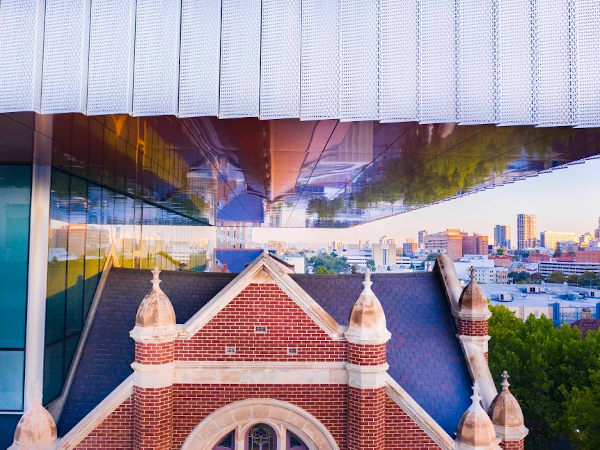 When the new Western Australian Museum finally opens later this year most eyes will be on the vast new spaces, big enough to hold T-Rex, that were built during the four-year, $396 million redevelopment project.

But inside are five distinct heritage buildings, the oldest dating back to 1855, that will now be seen new light when the complex reopens.

Paint has been stripped from windows, closed-in terraces opened up and unseen heritage details restored and viewable from new angles.

Trish McDonald, the project director for the museum, who has worked on the development since 2009, said preserving the old buildings was a crucial part of the design.

“The new build is very modern in its construction, which is that great juxtaposition.

“It gives us an amazing new way to look at our heritage buildings; lots of new vistas.” 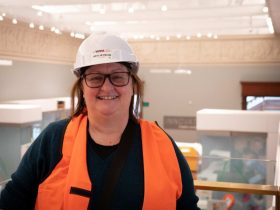 Trish McDonald, the project director for the museum, who has worked on the development since 2009, said preserving the old buildings was a crucial part of the design.

“The new build is very modern in its construction, which is that great juxtaposition.

“It gives us an amazing new way to look at our heritage buildings; lots of new vistas.” 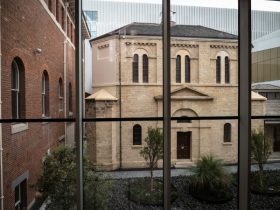 ‘It has a sorry history’

In the central courtyard of the new museum stands the Old Perth Gaol, cleaned up, and reappointed.

Built in 1855 to house convicts, it still has much of the old layout intact, although it was only a prison for 33 years and became the home of Perth’s geological museum in 1891.

“It’s been a museum much longer than it’s been a jail,” Ms McDonald said. 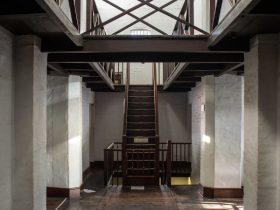 Before the rebuild it was used as the museum’s shop and cafe, but, while it has been painstakingly restored and reroofed, it will not form part of the museum experience when it reopens.

“It has a sorry history,” Ms McDonald said.

“Lots of people were incarcerated there, a number of people were hanged there including Aboriginal people, so it has a dark past.
“A lot of the consultation that we have done around this project with Aboriginal communities [has indicated] that it’s a place they won’t enter into.

“What we have decided to do is allow people to go in but not make it an essential part of the journey because then we would be excluding people who wouldn’t feel comfortable.” 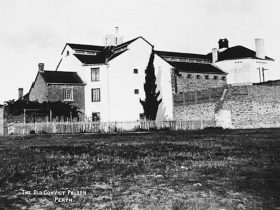 Old convict prison circa 1890. The grapevine can be seen growing on the side of the building. (Supplied: State Library Of Western Australia).

Also preserved on a pergola leaning against the prison wall is what is believed to be Australia’s oldest grapevine, understood to date back to 1850 or the 1860s.

With major works going on around it, the grapevine has been carefully treated by the builders and pruned by a longtime volunteer to ensure its survival into the museum’s new era. 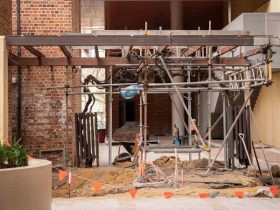 The grapevines at the old gaol are believed to date to 1860 and have been preserved throughout construction. (ABC Radio Perth: Emma Wynne).

For visitors, the journey into the new museum will start in the vast new building on the Francis Street side, before taking them through the old buildings.

The redevelopment project has joined together the four buildings that form an L-shape along Beaufort Street and James Street Mall.

New light-filled, golden walkways attached to the buildings have made it possible to move from building to building without taking stairs or backtracking.

The additions addressed the problem that none of the floors in the separate buildings were level with each other. 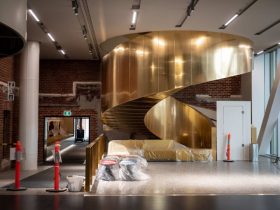 The gold colour refers both to the museum’s early days as the geological survey and to the state’s ongoing mineral wealth.

From the Parthenon to Perth

From the new gallery, visitors then progress to the Government Geologists building and then to the Beaufort Street building, which originally housed the state art gallery.

In the grand central room, the Hellenic gallery has been given a new life showing the exhibit on WA creative ingenuity. 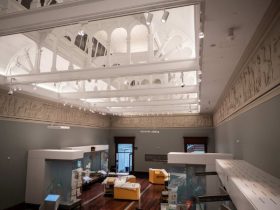 “The frieze that is around the walls; this a replica of the Parthenon frieze,” Ms McDonald said.
“It was cast off the British Museum’s frieze, and actually the detail in our copy is better now than the detail in the original marbles because they have cleaned them over time and worn the details down.”

Now so clean that it looks like it has been painted white, the refreshed and much lighter gallery also has a new addition — a balcony on the upper wall to let viewers get closer to the friezes than ever before. 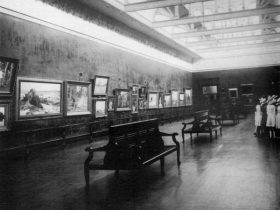 Upper Gallery of the Beaufort Street Building with the Parthenon friezes round the wall, early 1900s. (Supplied: State Library Of Western Australia).

Ms McDonald said despite the galleries being part of the old museum for decades; they now looked so different, it would be a completely novel experience for visitors.

“I do think people will come in there and go, ‘I don’t think I’ve ever seen this before’,” she said.

“But they have; it just looks incredibly different.”

Bringing the whale back

Across a golden walkway in Hackett Hall, once home to the State Library, the museum has finally been able to bring home its prize exhibit; the massive blue whale skeleton, visited by generations of children until it was moved into storage in 2003. 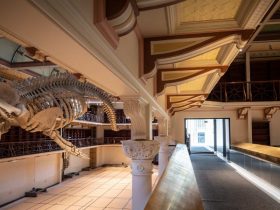 “We are really excited to have the whale back on display after a considerable amount of time,” Ms McDonald said.

“Hackett Hall was the location for a gallery called Land and People before we closed down.

“It will be our function space, so people can come and dine with the whale.”

In the new building that cantilevers over the Hackett Hall roof, it is now possible to get a view of the building’s exterior — previously only available to roofers and birds. 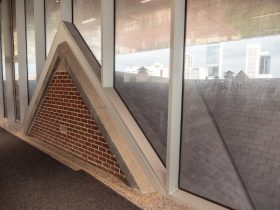 The roof and sidewall of Hackett Hall can be seen up close from the new building. (ABC Radio Perth: Emma Wynne).

While the initial design caused public consternation for the way it appeared to loom over the heritage library, now that it has been built it has been more readily accepted.

“I think most people are happy with the way it is cantilevering over and can see how effectively it frames the building,” Ms McDonald said.

“There is enough breathing space over the roofline that you can actually see a vista of the city.

“Also, when you are on this level, you can see some of the features of the roof up close; all the beautiful sandstone detailing wraps around the quite prosaic back wall of this building.” 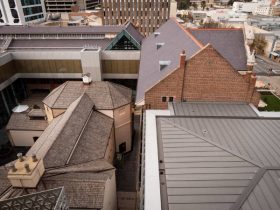 ‘For the longest time, it was just a big grill’

In the Jubilee building, a somewhat half-hearted tribute to Queen Victoria that was not completed until 1897, 12 years after the Queen’s golden jubilee, some of the biggest changes have taken place.

A grand curving terrace, crafted in the style of Victorian Byzantine architecture, was glassed-in for offices in 1954 and has now been opened up.

The sweeping stone steps to the main entrance, long since blocked off, have been restored and will once again be open to the public.

“When you stand out on the mall and see this grand arrival point reinstated it is just really fantastic,” Ms McDonald said.

“For the longest time, it was just a big grill and a stairway to nowhere.” 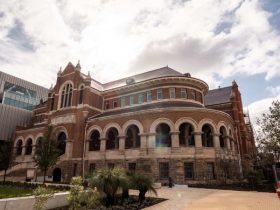 WA Museum Jubilee Building. The terrace has been opened up and the grand entrance reinstated. (ABC Radio Perth: Emma Wynne). 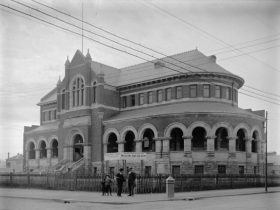 The Jubilee Building, circa 1900, shortly after it was built as library, museum and art gallery. (Supplied: State Library Of Western Australia),

The closed-in terrace was also, for a long time, Ms McDonald’s office and the place where much of the early planning for the new building took place.

Now that the final work is taking place, and the exhibits have begun to come out of years of storage for installation, she and the whole team are starting to see years of work come to fruition.

“We are just thrilled at the results and how it has all come together,” Ms McDonald said.