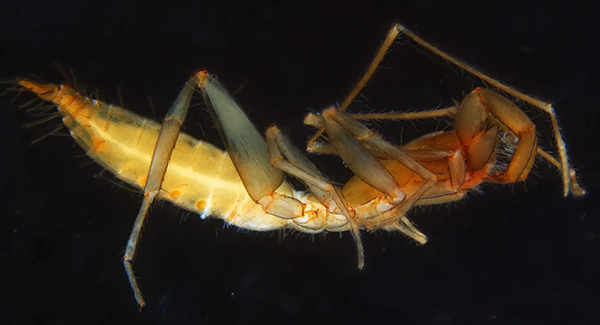 Researchers have discovered dozens of new species of arachnids living underground in the Pilbara region of Western Australia.

The 56 new species – formally called schizomids – were found by scientists from the University of Western Australia and the Western Australian Museum, their findings published the journal Molecular Phylogenetics and Evolution.

The arachnids have not yet been formally named, but researchers were able to use DNA sequences and physical characteristics to determine at least 56 new species from WA alone.

“Worldwide there are approximately 350 species known so once we’ve described these new species, Australia will have around one-third of the known schizomid fauna,” she said.

The arachnids also go by the name “whip-sprickets” thanks to their whip-like front legs and mixed spider and cricket-like appearance.

The schizomids have no eyes so their antenna-like front legs are used like a cane to tap the ground in front of them.

WA was already globally recognised as a hotspot for subterranean fauna, with an estimated 4000 species, according to Dr Abrams.

The research team believe there are many more out there because the arachnids have small distributions and are poor dispersers.

“This discovery of multiple new species of schizomids reinforces how unique and highly diverse the fauna is,” she said.

Ten species of schizomids are on the WA threatened fauna list due to their habitats being vulnerable to disturbance and destruction.

“Preserving habitat is important because subterranean schizomids are so well-adapted to dark, humid environments that they can’t survive on the surface and so can’t move to new habitat if their current habitat is destroyed,” Dr Abrams said.

Positions Vacant » View All
» Facilities & Info Mgmt Governance Officer – NMA
» Casual Relief Teachers, Education Officers – SH
Latest News » View All
AIATSIS to open Alice Springs engagement
& digitisation centre with NT Govt support Read more.
Eric Gill’s Prospero & Ariel at the BBC
- judging the past & Ditchling Museum Read more.
Art attack – when vandals strike
- a glimpse of past causes & art vandalism Read more.
A letter to MoAD’s visitors & friends
& road to recovery after arson attack Read more.
Museums among Aus’s most trusted orgs – CAMD
Mat Trinca, NMA ‘trusted sources of info’ Read more.
Top +
Council of Australasian Museum Directors, c/o Ms Daryl Karp, Museum of Australian Democracy at Old Parliament House PO Box 3934 Manuka, Australian Capital Territory 2603 Australia, © CAMD 2022
Copyright: All information and resources provided on this website remain the copyright of the Council of Australasian Museum Directors. Permission is granted for viewing and downloading for personal and not for profit purposes. Those wishing to reproduce any materials for commercial, educational or other uses are requested to contact us.
Disclaimer: The content of this website is provided for information purposes only and is not intended as a substitute for professional advice. No claim is made as to the accuracy or authenticity of the content of the website. The Council of Australasian Museum Directors does not accept any liability to any person for the information or advice (or the use of such information or advice) which is provided on this website. The information on our website is provided on the basis that all persons accessing the site undertake responsibility for assessing the relevance and accuracy of its content. No responsibility is taken for any information or services which may appear on any linked web sites. Hostgator.
.