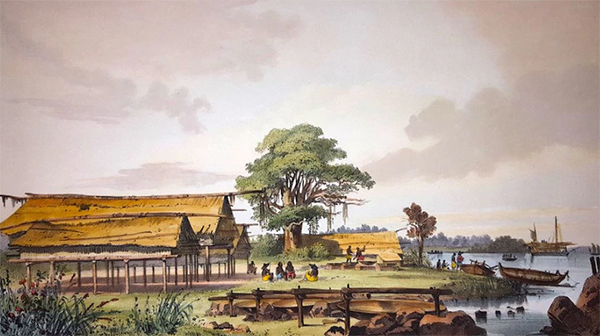 The first study of Asian occupation sites in 50 years has revealed Aboriginal people traded with foreign visitors prior to British settlement.

There are small clues if you know what you’re looking for.

An Indonesian tree where it shouldn’t be, a fragment of foreign pottery on a scenic northern beach.

They are markers of an annual Asian occupation of the northernmost tip of Western Australia that remains a mystery.

“This is an unknown part of Australian history,” archaeologist Corioli Souter said.

“This contact was happening prior to colonisation of this part of the northern coast, so it’s an Asian industry working with Aboriginal traditional owners.

“I think we’re going to get some really interesting outcomes.” 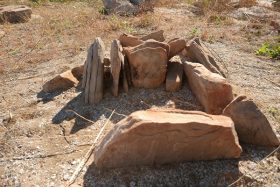 Dr Souter is part of a research team from the West Australian Museum and the University of Western Australia, working with the Kwini people to try to piece together the little-known trepang industry of the 1700s and 1800s.

The slimy, spiky sea animals shaped like cucumbers were a sought-after delicacy and common in the reefs along northern Australia. 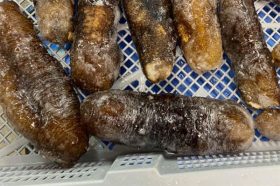 Each December, as tropical storms brewed on the horizon, fishing crews sailed from the islands of South-East Asia and set up camp on remote beaches in what’s now the Kimberley and Northern Territory.

They stayed for months at a time, catching, cooking and drying the animals, which would be sold to Chinese merchants as food with claimed aphrodisiac qualities.

The fishing camps opened up international trade decades before the British settled the continent: an exchange of boats, seafood and women that connected Indigenous Australians with Asia. 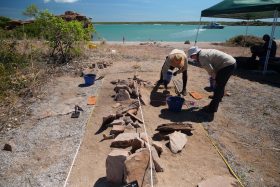 The previously unknown trade history is being revealed through excavation on the Western Australian island of Niiwalarra.(ABC News: Andrew Seabourne).

The first study in 50 years

While the Northern Territory sites are well-documented, the Kimberley fishing camps have not been studied since the 1960s.

That’s set to change, with a recently created marine park the catalyst for a fresh archaeological investigation. 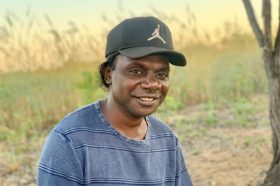 Kwini man and field assistant Ian Waina said he was glad the archaeological study was being done.(ABC: Erin Parke).

Kwini man Ian Waina has been helping with the digs.

“I’m glad this work’s being done because we always heard stories about how the Makassan were coming here,” he said.

“They were doing a lot of trading with our people; we didn’t have canoes until they came here.

“Aboriginal people, we taught them how to survive, we shared our knowledge.”

Several local women are helping with the fieldwork.

Their presence is vital: they know the oral history of the Asian visitation and the coastal archaeological sites. 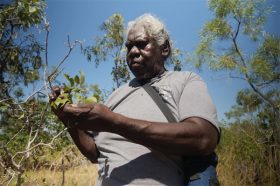 Wunambal woman Dorothy Djanghara has been sharing her knowledge and memories with the researchers. (ABC: Andrew Seabourne),

“In the old days, some of our people used to talk the Indonesian way,” she said.

“They still kept their own language, but the Indonesians also taught them their way.”

Ms Djanghara believes it would have been an interaction based on an exchange of knowledge — and even people.

“The blackfellas used to build their rafts out of driftwood and paperbark, but when they met the Indonesians, they traded for canoes,” she said.

“They’d take the girls out to Indonesia, and they wouldn’t come back.” 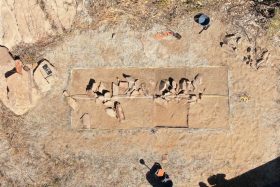 The excavation sites have not been studied since the 1960s.( ABC News: Andrew Seabourne).

The Kwini people have visited the isolated island of Niiwalarra for thousands of years.

More recently, it was the site of a World War II military base and failed attempts at cotton farming.

But the main focus for the archaeologists is a network of hearths still visible on the beach, where trepang was hauled from the ocean and cooked in big iron pots more than 200 years ago. 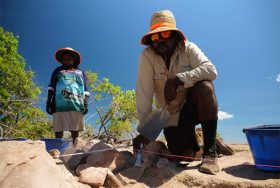 Four coastal sites are being excavated in the Kimberley as part of the 2021 fieldwork.(ABC News: Andrew Seabourne).

“We are mainly looking for pieces of pottery, which we can use to work out where the fishing crews came from, and chunks of charcoal, that can be used for radiocarbon dating.”

“We might still get earlier dates because the Dutch historical records suggest that people started coming down the Kimberley coast in the mid-1700s, and then it really picks up around 1800,” he said. 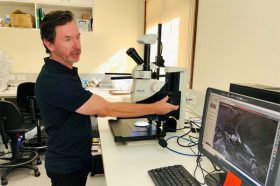 Professor Paterson said the Asian presence in northern Australia was a fascinating moment in development, foreshadowing the itinerant workforce of today.

“This is a really modern industry that was all about meeting global markets,” he said.

“It actually resembles what happens in Australia today.

“I like to think of these as kind of ‘sail-in, sail-out’ workers that travel from Asia, are there for the season and then head home again.

“The fact that the big resource industries of the 1700s and 1800s are all maritime – you’ve got whale, pearl shell, trepang and not sheep — is cause to rethink the story of Australia.”

Artefacts collected by Professor Crawford in the initial 1960s study are also being scientifically tested for the first time, including a musket ball and a Dutch coin dated 1823. 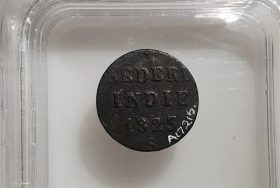 A Dutch coin from 1823 was found at an Asian fishing camp in the Kimberley. (Supplied: WA Museum).

The research will have practical benefits too.

The area is managed by the Balanggarra Aboriginal Corporation and the Parks and Wildlife Service.

Documenting the fishing camps will help preserve them amid increasing tourism in the area.

Discussions are ongoing, but it’s expected some sites will be signposted for visitors and others kept secret.

Watch this story on ABC TV’s Landline at 12:30pm on Sunday, or on iview.