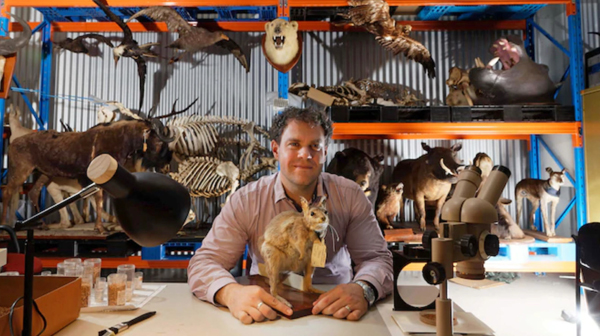 A black bear and a warthog stand side- by-side eyeing off a swooping eagle. A polar bear snarls over their heads and a hippopotamus yawns at a light fitting.

This is the exotic menagerie found at the Western Australian Museum’s Welshpool storage facility, where endangered rhinos rub shoulders with grey kangaroos, and lions jostle for shelf space with exotic monkeys and domestic dogs.

Next to the stuffed animals are giant banks of drawers, each containing neatly labelled collections of small animal bones. Hundreds of tiny femurs. Piles of rib cages. Tubs and tubs of miniature pelvises.

It is just one of the wild and wonderful rooms in the cavernous warehouse space which holds about 8.5 million of the objects that collectively tell the story of WA. From rocks that reveal the secrets of how the land was formed, to indigenous artworks depicting stories from the Dreamtime, to artefacts from the shores of Gallipoli, this is the physical stuff that has shaped this land, our culture, us.

In the second half of 2020, the new Western Australian Museum is set to open in the Perth Cultural Centre. Part of the $395.9 million development will see a modern structure envelop the existing heritage building. It will boast 6000sqm of gallery space and it is set to be the jewel in the crown of WA’s museums, which include the Maritime and Shipwreck museums in Fremantle, and several regional centres.

“It will be a unique museum in terms of not only its construction, but also the story it will tell in terms of the West Australian story and our place in the world,” Minister for Culture and the Arts David Templeman said.

While construction ploughs ahead in the city, in Welshpool teams of curators are sorting, categorising and, in some cases, discovering anew the museum’s treasures. History doesn’t sit still, and the new museum is giving the custodians a chance to rethink how the story of WA should be told.

“We are taking a completely different approach to how the museum displays its collection,” project director Trish McDonald said.

Forget dusty old exhibits with dry scientific placards. The new museum will tell a more in-depth story of WA. The museum is carrying out ongoing consultation with remote Aboriginal communities about how to tell their story. And Ms McDonald said they would not shy away from the darker aspects of WA’s past.

“We will be dealing with some quite hard history,” she said.

“The deaths in custody and various other stories around the impact of colonisation. One thing we are doing is working very closely with communities to talk through the way forward and how we can do it in a way that celebrates survival and looks to the future, acknowledges the past, but definitely looks to the future.

“We will have some areas in that space where there is a bit of a decompression and a quiet space after some of those hard stories.”

There is also a renewed focus on our changing climate and how humans have impacted the WA environment.