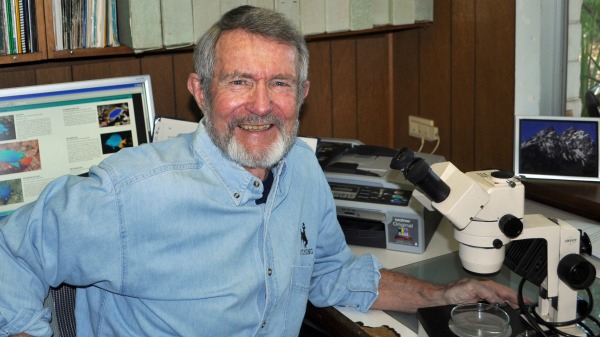 Three months ago, a 72-year-old Gerry Allen clung to a lifeboat in the South China Sea watching the boat on which he had been travelling to his next job descend to a watery grave.

Waiting hours for rescue, Dr Allen could possibly have considered it time to retire from marine biological consulting.

But not so for this tireless champion of the fish world.

Dr Allen’s 50+ year career has seen him log more than 12,000 hours of scuba diving, author 37 books and more than 400 scientific publications, and discover hundreds of freshwater and marine fish species.

He has also nearly died from malaria in remote Papua New Guinean mountains, spent nine hours lost at sea without a boat off Madagascar and narrowly avoided a crocodile attack in the Kimberley—all while seeking to better understand the mystical world of fish.

As a youngster the captivating world of corals enchanted Dr Allen to such an extent that the then footballer ditched his studies in physical education and coaching in favour of a marine zoology degree.

Not long after Dr Allen found himself posted to the island nation of Palau in the western Pacific, then on a research boat bound for Papua New Guinea, to Australia and a job at the Australian Museum in Sydney.

He eventually moved to Perth as curator of fishes at the Western Australian Museum (WAM)—a post he held for 25 years.