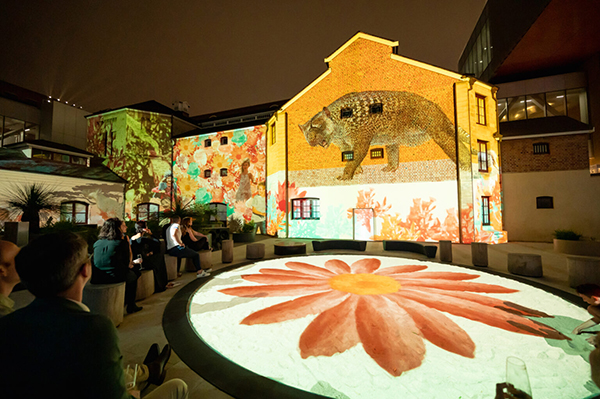 The Electric Canvas has designed and installed an innovative digital projection mapping solution for the heritage-listed Old Perth Gaol, situated in the central courtyard of the WA Museum. Visitors to the museum and the wider Perth Cultural Centre are currently treated to an engaging night-time projection son et lumière experience. The permanently installed system will also enable the museum to visually transform the Old Gaol building for various special events and exhibitions for years to come.

In November 2020, Boola Bardip, the WA Museum, reopened to the public after four years of major building works that saw the integration of newly designed contemporary architecture with the museum’s existing historic and heritage-listed buildings. The Old Perth Gaol (built in 1855), one of the museum’s four heritage buildings, stands elegantly in the central courtyard. Heritage and access regulations had constrained public access to what is one of WA’s oldest and most significant heritage assets, however architectural projection had the potential to considerably enhance visitor engagement with this important building.

The Electric Canvas had been working with the WA Museum since late 2018 on its plans to install a permanent projection system for the new museum. Several options were discussed and investigated and, after several rounds of technical studies, tests and budget evaluations, the Old Gaol was chosen as the preferred site.

Fast forward to late 2020. Peter Milne, TEC’s managing director, despite travel restrictions to WA, had the opportunity to make a cursory investigation of the Old Gaol building and immediately knew it would make an incredible ‘theatre’ for projection mapping. With the museum’s endorsement, Milne set out to survey the Old Gaol’s northern and southern elevations, as well as the Indigenous Dance Circle in the courtyard, in anticipation of what might be. Initial discussions with the WA Museum’s CEO, Alec Coles, and Jason Fair, Director of Engagement, proved encouraging and, by February 2021, TEC had completed a technical study and overlay, as well as a corresponding equipment specification. 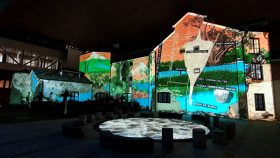 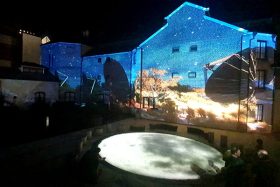 Finally, option number six hit the nail on the head: bringing the projectors indoors to WAM’s ground level corridors with six-metre-high floor to ceiling windows looking out onto the Old Gaol below. Although installing projectors behind windows at complex angles presented an interesting set of challenges, it thankfully eradicated the multi-layered intricacies of working through heritage requirements. In order to cover the entire façade of the gaol (which includes deep returns and angled corners) as well as the Dance Circle, the projectors needed to be installed at two separate locations of the corridors – the eastern foyer and the exhibition foyer. TEC carried out a real-world feasibility test on-site to evaluate the outcomes of projecting through the corridor windows and confirmed that light loss and bounce could be mitigated successfully.

Installing the projectors in clear view within a newly constructed public area of the museum required an elegant rigging solution that would also allow for efficient access for servicing and maintenance. Over the following weeks, Milne worked side-by-side with WAM’s Special Projects team, architect and builder, presenting mechanical and engineering considerations so that a suitable rigging solution could be designed for the projectors. TEC’s project team also worked on a networking solution between the remotely located control room and both projector locations, which are separated by a significant distance. 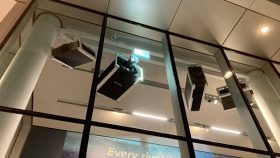 TEC’s equipment specification included a total of six Christie laser phosphor projectors, ranging from 13,000 to 31,000 lumens, suspended approximately five metres from the floor on customised mounting brackets to blend with the design of the foyers. The ideal content delivery system for the job was Modulo Player, from French developer Modulo Pi. TEC has delivered many mission-critical projects with the media server system, which features a flexible ‘remote’ topology allowing easy control from mobile devices such as tablets and the like. In addition to the content delivery, Modulo Player controls all other aspects of the projection system, including projector control and a host of external devices, including the sound system. The media server system was installed with a hot back-up, providing instantaneous switching between servers if required and redundant signal paths to each projector. The installation also incorporates high quality PTZ cameras and remote access so that TEC can observe and access the system remotely to provide off-site technical support if required. 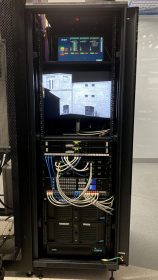 For the sound system, TEC recommend commercial cinema components from Adelaide-based manufacturer Krix Loudspeakers, known worldwide for their high-quality cinema sound systems and high-end home theatre systems. Eight mid-high range speakers were installed inside the Old Gaol building itself, on a free-standing frame structure that positioned the cabinets just behind the window spaces (from which the glass was removed and replaced with extruded mesh grilling for weatherproofing) in order to satisfy the strict heritage scrutiny. Two sub-bass cabinets were installed in the courtyard with customised enclosures to blend into the sitescape.

Peter Milne, Managing Director of TEC, comments: “Despite the onerous scrutiny and numerous stipulations from a seemingly endless array of stakeholders, the Museum maintained absolute conviction in the project and provided the support needed to see it through. They were a pleasure to work with. It’s very unusual for me to have commissioned such a project without being able to freely visit the site. I’m looking forward to seeing the Museum’s first mapping show on the Old Perth Gaol soon!”

The Minderoo Foundation signed on as WAM’s principal project partner, and the wheels were set in motion to complete the installation, alignment and programming of the system for the launch of the projections on the Old Perth Gaol on 9 December. In parallel, the museum began its search for a creative agency to work alongside WAM’s curatorial team on the design and production of the initial projection show that would bring the site to life. The Electric Canvas developed both 2D and 3D architectural templates and content production workflows for the Old Gaol so that a variety of design approaches can be utilised into the future.

The project’s first show, “Illuminate: Timescapes”, is a 20 minute feature that references the Nyoongar Six Seasons and presents a surreal and magical narrative featuring the unique plants, animals and stories of Western Australia. The work was produced by creative design studio, Sandpit, from Adelaide, who worked with Aboriginal representatives, the WA Museum and Minderoo Foundation staff to create the show’s six acts. 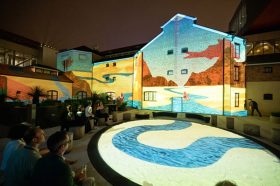 Once again, Covid-19 added yet another row of hurdles for TEC to jump over for the on-site installation phase of the project, especially given Western Australia’s severe border restrictions and mandatory quarantining for out-of-state travellers. But the team rose to the challenge and, despite having to simultaneously deliver major Christmas projects in three different cities around the country, the Old Perth Gaol projection system was successfully installed, programmed and operational for the project launch in front of VIPs and dignitaries.

WA Museum Director of Engagement, Jason Fair, comments, “The great thing about data projection is that it allows the buildings to transform into something else. We are delighted to have worked closely with The Electric Canvas, and its team, led by Managing Director, Peter Milne, in the installation of a new permanent projection system.”