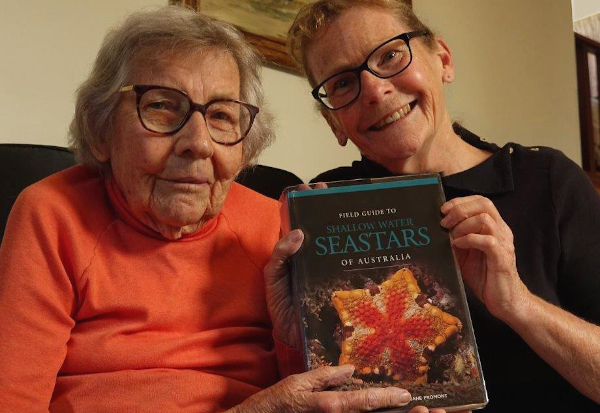 You may not know marine scientist Loisette Marsh, but she’s responsible for our detailed understanding of the marine creatures inhabiting Western Australia’s coastline.

“TO BE REMEMBERED as a sea cucumber is questionable,” says 91-year-old seastar expert Loisette Marsh when recalling all the different marine species that have taken her name. “There’s also a hermit crab, anemone, acropora coral, mollusc,” and of course, a seastar.

On World Oceans Day, the Western Australian Museum launched Loisette’s magnum opus, a Field guide to the Seastars of Australia, over 60 years in the making. At one time, Loisette was one of only two echinoderm experts in Australia, spending much of her life at the museum, collecting, naming and keeping in good condition precious specimens.

Loisette is among a group of women oceanographers who, prior to the 1960s, weren’t permitted on research vessels, and were resigned to studying in shallow waters, close to the coastline. This is said to have changed when the Scripps Institution of Oceanography invited a woman to join a major expedition in 1963. 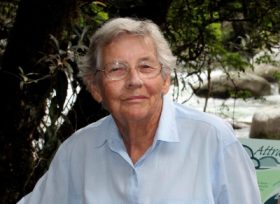 “This change made it possible for me and my female colleagues to further our careers in marine biology,” says Loisette, who at that time had already gained a degree in zoology, had lived on Norfolk Island, sailed through the Fiji archipelago, and in 1970, took up a position as a graduate assistant in the WA Museum’s Mollusc Department.

By 1978, Loisette was the Head of the Marine Invertebrate Zoology Department, maintaining that position until 1988. And while she may know the West Australian coastline better than anyone alive, her story began on the shores of Mill Bay, off Vancouver Island in Canada.

Her father, William Notcutt Rutt, a retired sea captain, wanted to remain close to the sea and so Loisette developed and early, enduring relationship with the ocean. 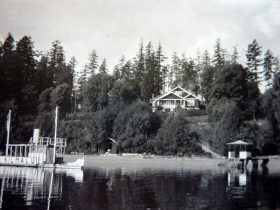 Loisette’s childhood home in Canada, named “Kilmalu” – meaning “welcome” in the coastal Salish language. In the forefront of the photograph is the boat-like diving platform her father built. It was built as an afternoon teahouse. © Loisette Marsh.

“I was an only child so, without anyone to play with, I would amuse myself by fossicking along the rocky shoreline at Mill Bay. In the tidal pools, I would see little seashells, green anemones, colourful crabs, and purple seastars clinging to the rocks.

“Spying interesting animals interacting with each other in the rock pools was an endless source of entertainment. The large purple seastars clearly made an impression upon me.” Loisette and her parents moved to Perth when she was ten-years-old, and Mill Bay was replaced with Cottesloe Beach, where she clambered down onto the rocky reef platforms, examining all new pools. 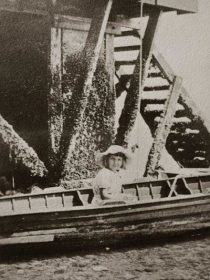 Loisette sitting in a boat near the jetty in front of her home. © Loisette Marsh.

Loisette’s curiosity for new places and their marine offerings extended into her work at the WA Museum, where she completed hundreds of expeditions along the Western Australian coastline. “I was the central figure in collecting and cataloguing the coral collection of the WA Museum from a few species on a shelf to a comprehensive collection filling a whole room,” Loisette says, and Di Jones, Director of Collections & Research at the WA Museum confirms her huge contribution.

“Loisette is acknowledged as a genuine pioneer with a ubiquitous knowledge, as well as a much-respected scientist with a world-wide reputation,” she says. “Her work, meticulously documented in many scientific papers and field notebooks, has led to a vast, detailed appreciation and knowledge of our enormous coastline, and beyond.

“Loisette curated and documented the numerous specimens collected through her many expeditions and fieldwork activities in our vast museum registers. These formed the foundations of the extensive WA Museum’s Aquatic Zoology collections.”

From getting bogged down in crocodile-infested tidal creeks to surveying some of the most remote reefs off the WA coastline, looking back on her career, Loisette values the intimate understanding she has of the marine world thanks to her extensive field trips to places few get the chance to experience.

“One of the most remote places I have dived on are the Rowley Shoals, Scott Reef and Ashmore Reef – three groups of reefs over 300km off the Kimberley coastline. A team of us would go out on a small live-aboard research vessel for an extended period studying fish, molluscs, corals, and invertebrates.

“When diving in remote locations, the clear water, pristine coral colonies, the abundance of shells, and the prolific number of large tame fish is always exciting to see. They would often swim up to you, curiously viewing their reflection in one’s face mask.” 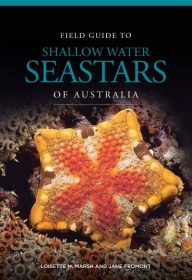 The major role Loisette played in securing Ningaloo Reef as a protected marine park also places her as a central figure in the conservation of WA’s marine heritage. “The WA Museum was asked to survey the Ningaloo Reef as part of the extensive stakeholder consultations with government agencies and the broader community, during the planning of the Ningaloo Marine Park,” Loisette says.

“We conducted a number of field trips documenting the marine diversity of the region – in particular corals and echinoderms.” This information was then used in deciding on the merit of Ningaloo becoming a marine park in May 1987.

As for the publishing of her new, comprehensive book on her beloved sea stars, Loisette is relieved. “It has taken a lot of perseverance to bring this book to its completion,” she says. “After my retirement from the WA Museum in 1993, I began writing the book in earnest. I was hoping to have the book published much sooner but the advancement in genetics meant the taxonomic placement of many species had to be revised.”

WA Museum CEO Alec Coles says the field guide is yet another enormous contribution to marine science “The lack of echinoderm taxonomists in Australia has made documenting this fauna extremely important,” he says. “Loisette has painstakingly captured some 60 years of research, knowledge, and understanding of WA’s massive coastline in this one field guide.”

Following on from the book, Loisette has one ambition: to continue to swim, which has become increasingly difficult with old age. “I hope to continue swimming for as long as possible,” she says. “This year I did go snorkelling to have a look at the seastars off South Beach Fremantle, but the age of 91, being buffeted by the surf is a real danger and the cold water is a bit intimidating, but I still enjoy going for a swim when the weather is nice.”