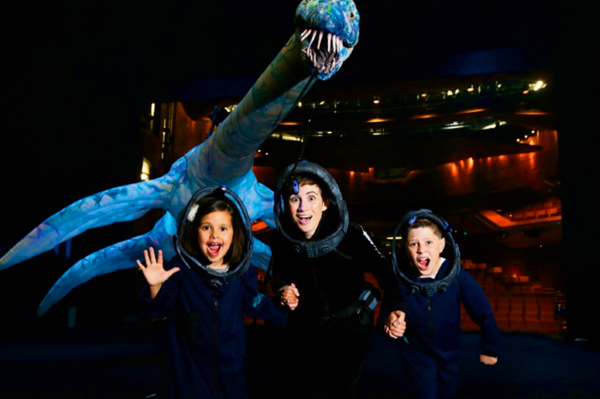 Sesame Street was not just a part of Scott Wright’s childhood – it inspired his career.

The puppeteer of 15 years, who debuted his show Erth’s Prehistoric Aquarium at the State Theatre this month ahead of a national tour, said characters like Bert, Ernie, Cookie Monster and Grover had a huge impact on him.

“At the time I never thought I would be a puppeteer but I discovered a love for puppets,” he said.

“I think puppetry is experiencing a renaissance with productions of The Lion King and War Horse – it has come into the mainstream and there is a greater appreciation for puppetry.”

An extension of last year’s Erth’s Dinosaur Zoo, the interactive Erth’s Prehistoric Aquarium brings to life and to the stage forgotten prehistoric aquatic critters including Kronosaurus and Plesiosaur.

The show, which was three years in the making, will feature the fourth generation of brand new puppets.

“They have been unveiled in Perth,” Mr Wright said.

“The process consists of building them and finding their weaknesses and fixing them, so from the initial making of the puppets, these are fourth generation.”

After the show concludes in Perth on January 22, it will travel throughout Australia, with conversations already underway to take it to three other countries.

Perth Theatre Trust general manager Duncan Ord said it was a show for the whole family.

“The work of the Museum continues through its Fremantle and regional museum sites, but while the doors are temporarily closed at our site in Perth it is a real win for audiences to be able come to the Cultural Centre to see the Plesiosaurs and other incredible prehistoric creatures,” he said.

For dates and tickets, go to http://ptt.wa.gov.au/venues/state-theatre-centre-of-wa/whats-on/erths-prehistoric-aquarium/

Positions Vacant » View All
» Senior Curator of Art – MAGNT
» Director, First Nations – MAAS
Latest News » View All
Lockdown gardens – an ancient lineage
viewed through Te Papa's collns Read more.
Art has always helped, healed and cured
Turin museum equipped for vaccination pgm Read more.
Australians support masks & border closures
& are willing to be vaccinated for COVID-19 Read more.
COVID or Covid? The comfort of pedantry
at a time of national crisis Read more.
Cultural sector reports misleading numbers
- Unknowingly? Why it needs to stop in 2021 Read more.
Top +
Council of Australasian Museum Directors, c/o Ms Daryl Karp, Museum of Australian Democracy at Old Parliament House PO Box 3934 Manuka, Australian Capital Territory 2603 Australia, © CAMD 2021
Copyright: All information and resources provided on this website remain the copyright of the Council of Australasian Museum Directors. Permission is granted for viewing and downloading for personal and not for profit purposes. Those wishing to reproduce any materials for commercial, educational or other uses are requested to contact us.
Disclaimer: The content of this website is provided for information purposes only and is not intended as a substitute for professional advice. No claim is made as to the accuracy or authenticity of the content of the website. The Council of Australasian Museum Directors does not accept any liability to any person for the information or advice (or the use of such information or advice) which is provided on this website. The information on our website is provided on the basis that all persons accessing the site undertake responsibility for assessing the relevance and accuracy of its content. No responsibility is taken for any information or services which may appear on any linked web sites. Hostgator.
.