The discovery of an exotic spider in Albany recently has highlighted the value of community surveillance and initiatives like the annual Biosecurity Blitz in identifying new species that could threaten the State’s valuable agricultural and fisheries industries.

The fifth year of the Department of Primary Industries and Regional Development’s (DPIRD) Biosecurity Blitz will run from October 19 until November 16. 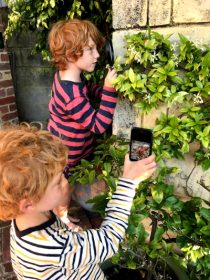 Seven year old twins Otis (left) and Henry Bryant on the hunt for a Slater spider in their backyard, in preparation for Biosecurity Blitz 2019.

DPIRD development officer Laura Fagan said the blitz provided a great opportunity for the public to survey their local environment for any interesting creepy crawlies, like the spider detected in Albany.

“The spider was reported by a member of the public, who uploaded photographs via the department’s MyPestGuide Reporter app to its Pest and Disease Information Service team,” Ms Fagan said.

“We then liaised with the Western Australian Museum – the authority on this particular kind of spider – and identified it as a female Slater spider (Dysdera crocata), which hails from the Mediterranean and has never been found in this State before.

“Fortunately, the spider – which is now a preserved specimen in the Museum’s collection – does not pose a threat to WA’s agriculture industry or the natural environment.

“This spider report is s a great example of the important role the community plays in monitoring and reporting interesting or damaging insects, weeds, feral animals and aquatic pests.”

“Vigilant surveillance is the cornerstone of biosecurity, which provides important information to help assess and verify freedom from certain exotic pests and diseases to enable access valuable interstate and export markets,” she said.

“We now have a selection of digital tools available to help the department connect with community, industry and other tiers of government to gather crucial reporting information that provides an early warning system for exotic pests and diseases that aid an effective response.”

Interested participants are encouraged to register on the department’s Biosecurity Blitz 2019 webpage, while students and teachers can sign up for the School Challenge to win prizes.

Ms Fagan encouraged all members of the public – young and old – to sign up for Biosecurity Blitz 2019 before the campaign begins.

“We receive great feedback from this initiative every year, as people enjoy the fun of getting outdoors and sharing in the satisfaction gained from helping to reinforce the State’s biosecurity defences,” she said.

“The reports from Biosecurity Blitz 2019 will support DPIRD’s ongoing surveillance efforts and other activities to protect WA from the threat of exotic pests and diseases.”

For more information and to sign up for Biosecurity Blitz 2019 and receive a weekly newsletter visit agric.wa.gov.au/biosecuritybliz.