You are here: Home » Articles filed under: 'News' » Article: 'War, killing and memorials:' 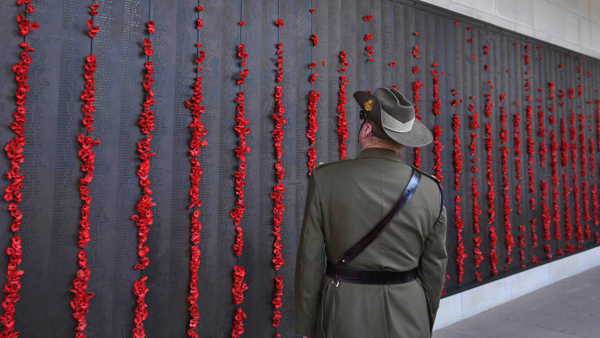 A man in uniform walks along the Roll of Honour at the Australian War Memorial. Photo: AAP.

Nicholas Stuart, War, killing and memorials: How much to remember the dead?, The Canberra Times, 12 June 2018

Richard Denniss paused and looked around the suddenly silent room. He wanted to let his point seep in.

The Australia Institute in Manuka was packed. Denniss was launching his Quarterly Essay, Dead Right. This is a coruscating examination of how the tentacles of neo-liberalism have spread through the economy until any other way of thinking has been banished. But that wasn’t the point he was making now.

“Go to the War Memorial,” he urged. “Look at the Eternal Flame. It’s stark and beautiful, a poignant reminder of the sacrifice of more than 100,000 Australian soldiers who’ve lost their lives in war. Nearby are two plaques. They say the flame is ‘a gift to the nation from the Australian Gas Industry’.”

“Are you really telling me that after an unrivalled global performance of 27 years of economic growth we need to rely on the Gas Industry to remember our dead? Can’t we even afford to do this by ourselves? Is this a memorial, or just an opportunity for sponsorship?”

It was the proud, nationalistic historian Charles Bean who first suggested fusing the memorial shrine with a completely different need; that of celebrating the myth of the ‘Aussie digger’.

In other countries – such as Singapore, an island that’s borne more pain from war than most – remembering the dead is kept removed from the need to understand and interpret. There, the cenotaph, memorials, and Changi prison remain on well-trod tourist paths. Far less frequented is the Army Museum, over in suburban Jurong. There you’ll find unvarnished, detailed, and nationalist story-telling, in all its gruesome, horrific detail.

Perhaps that’s why it’s out of the way. Not everyone, especially big-spending foreign tourists, share Singapore’s creation myth.

Bean similarly wanted to create a unifying narrative for a young country. He wasn’t about to let inconvenient details get in the way of his mission. He became a central figure in the creation of our narrative – which is why some want to name the new ACT electorate after him.

His superlative, accurate, but incomplete history, for example, is even confused about the actual date war was declared with Germany. Yet this particular elision served his purpose perfectly.

Bean was forging and manufacturing an identity for a young country. There are other ways of doing this aside from telling tales of war, but they’re more complex.

Many rejected his work, but they didn’t write ‘our’ story. Later, more complex needs were recognised. That’s why there are two official volumes on “the government and the people” in the Second World War.

Most Aussies today can’t trace their lineage back to a personal connection with the Anzac legend. For them, spending $500 million on a memorial that divide us isn’t a sensible use of money. There are plenty of other museums we could establish and keep the memorial for its real job. To remember.

Others insist it’s obscene to have halls sponsored by companies that profit from war (in a memorial!)

BAE, for example. A great business, of course, sponsoring a terrific lecture theatre. That doesn’t alter the fact that its UK parent has been embroiled with allegations of bribery and serious fraud. Its munitions have been implicated in the bombing of hospitals. Or how about Rheinmetall, manufacturer of our new armoured vehicle? Do we want this company to sponsor an exhibit on anti-aircraft guns, perhaps, starring its own 88mm Flack gun; the one that destroyed so many allied planes and tanks in WW2?

Director Brendan Nelson told Senate Estimates he can, somehow, recognise and reject dirty money. “It’s hard to define it but you know it when you see it. For a start, there is no way I’m ever going to go out and seek support from the tobacco industry.”

Indeed. But boundaries can become blurred. Where does the memorial stop, and the museum begin?

Over the weekend the media was clogged with details of alleged SAS war crimes. It’s vitally important to note these investigations were initiated by the military itself. Former Special Forces commanders themselves, like straight-as-a-die ex-Major General Jeff Sengelman, want a unit focused on achieving its mission. Carefully; completely; and solely. The Army, under Chief Angus Campbell, is proving it can be trusted. We need to support it.

Such horrific allegations can’t be tolerated. We fight to maintain the law; not find extenuating circumstances. There’s no place beyond our values.

Nelson’s utterly wrong to suggest that we, as a nation, need to “be very careful in passing judgement”. Some things are utterly wrong. Those wanting a cover-up might think they’re helping. They’re actually hindering the army resolve an issue detrimental to its proper functioning.

Just like Spartan imagery. It’s not needed or wanted. It’s detrimental to achieving the mission.

A place exists for understanding the pressures soldiers are placed under, but that’s in sentencing: not in separating right from wrong. Anything that’s morally wrong will, inevitably, also be wrong operationally.

Former SAS captain, now MP, Andrew Hastie understands this. He says “everyone who wears the uniform is accountable to the Australian people”.

The actions of commanders show that this is a system that’s working.

Putting light on these issues is a good thing. Dark practices will slither away.

We need truth, not myth.