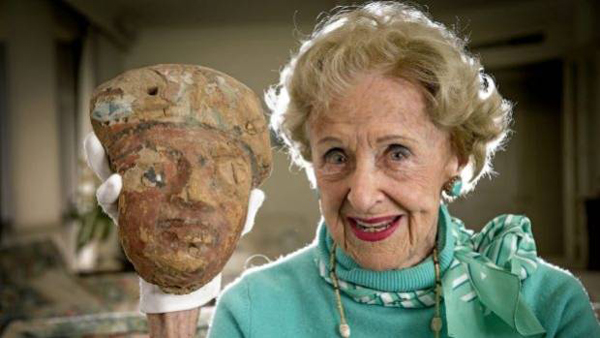 Deep beneath the badlands of Palestine, alone in a darkened tomb, Joan Howard crawled forward on her stomach in search of lost treasures.

It was the late 1960s, a turbulent time in the Middle East, but the thrill of discovery drove Mrs Howard deeper into the grave.

Sluggish scorpions scattered and clacked amid the bones of the ancient dead as she scooped artefacts and the detritus of ages into a bucket.

Only when it was full did she inch backwards. Ten metres above her, at the top of a vertical shaft hewn out of the desert bedrock, a colleague began to winch her swaying bucket of artefacts to the surface.

Five decades and thousands of kilometres away from that moment, sitting in the tastefully decorated surrounds of her riverside apartment in Perth this week, Mrs Howard smiles and hefts a mummy mask pulled from the sucking sands of Egypt on one of her many expeditions.

It is one of many artefacts acquired on her adventures, a collection come treasure trove the public has never seen.

Mrs Howard, 95, is WA’s real-life tomb raider. There is a mischievous twinkle in the great-grandmother’s eye as she reveals why she has humbly kept quiet about her derring-do.

“You don’t go round saying ‘I’ve been in a tomb’,” Mrs Howard said.

A nurse during World War II, she said the catalyst for her adventures was her husband Keith Howard.

In 1950, the young couple were crowned Mrs and Mrs Australia.

They appeared on the cover of The West Australian and were darlings of the local and international press.

But it was in 1967, when Mr Howard was posted to a senior role in the Middle East with the United Nations, that Mrs Howard was presented with the opportunity to indulge her passion for archaeology.

She volunteered on dig-sites with noted British and American archaeologists excavating the ruins of the Phoenicians in Lebanon, early Christians in Jordan and the Romans before the birth of Christ.

Through her husband’s UN connections, over 11 years she was given carte blanche to travel between Syria, Egypt, Lebanon, Jordan, Palestine and Israel.

She used her diplomatic freedom to search for antiquities before laws changed and it became legally difficult to do so.

Among her treasures, a hollowed-out crucifix from the time of Christ, sold to pilgrims of the day with the claim it contained a splinter of the cross on which Jesus was crucified.

She has Neolithic axe heads more than 40,000 years old, pottery and weapons from the Phoenicians and the Romans, coins and seals and jewellery from the time of the pharaohs.

She picks up a funerary mummy mask, tuning it to marvel at the features which once lay across the face of an ancient.

One of her favourite pieces is a Roman dagger she found buried with the skeletal remains of its owner.

She gave the skull to the WA Museum, one of a handful of pieces she has donated.