You are here: Home » Articles filed under: 'News' » Article: '‘We are tearing open that wound’'

‘We are tearing open that wound’ 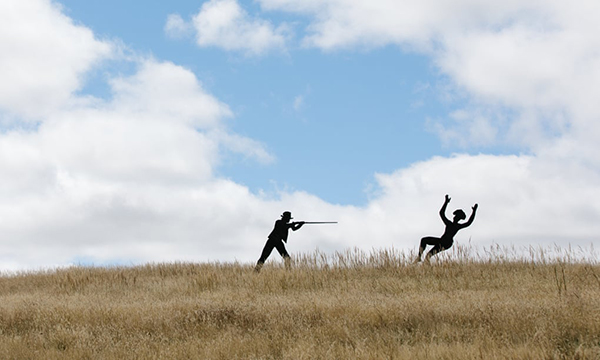 In Julie Gough’s new work The Missing, the artist reclaims a strip of highway that has been dotted with colonial silhouettes for more than a decade. Photograph: Jesse Hunniford/Mona.

For the island’s Mona Foma festival, public spaces ‘dripping in colonialism’ have been disrupted with screams, violence and truth

Launceston is one of Australia’s oldest and perhaps most characterful cities. It’s full of Georgian, Victorian and Federation-era buildings largely untouched by wrecking balls or developers, often bearing their year of construction a century ago or more.

With manicured lawns, flowerbeds and a classically inspired 1859 fountain, Prince’s Square pulls all that heritage charm together. But this week things are a little different. The bitumen around the fountain is painted with giant red letters spelling out messages of sin, theft and scars, while a foreboding soundscape envelops parkgoers.

A collaboration project between Aboriginal Tasmanian artist Kartanya Maynard and Kuku Yalandji, Waanji, Yidinji and Gugu Yimithirr artist Vernon Ah Kee, Waranta Takamuna! (we rise) is a simple but moving intervention: it’s disrupting the heritage facade of the square, the city and the colony from the inside out. 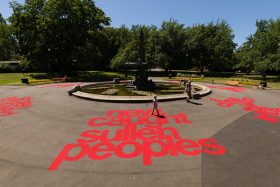 For Maynard, Prince’s Square is “dripping in colonialism”. “When I look at parks like Prince’s Square I see this deep, deep manipulation of the landscape into something almost too unreal – everything’s a little too perfect, and for me that’s deeply uncomfortable,” she tells Guardian Australia. “One of the trees in the park is even planted by one of Queen Victoria’s kids.”

Alongside Ah Kee’s Shakespeare and Kipling-quoting text, Maynard uses sound to reach into the past. “Waranta Takamuna! was our opportunity to look at Launceston, this space, and what it means to Tasmanian Aboriginal people,” she says. The 10-minute audio loop passes through different time periods and emotions, from the early violence of the Black War (the brutal colonial genocide of First Nations people which took place in Tasmania in the 1800s) to waves of assimilation, as Maynard’s ancestors were removed to islands in the Bass Strait by authorities or abducted by sealers.

We hear screams, tears and desperate pleas. And then, a campfire singalong of survival and community forged on those islands. “It’s not just a song – it’s a feeling,” Maynard says of Born On Old Cape Barren, sung by the late songman Uncle Ronnie Summers. Maynard herself performs the version heard in the square. 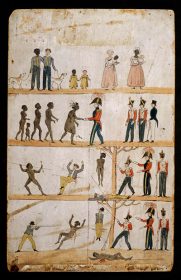 George Frankland (attributed) (1800-38). Governor Arthur’s proclamation board, 1829, oil on board. Presented to the Royal Society of Tasmania by Mr A Boltar, 1867 Photograph: Tasmanian Museum and Art Gallery.

“In one of the soundscapes I talk about how my heart was broken before I was even born, and pieces of it were left in all different places: one of them being Cape Barren Island, another being Launceston, Hobart, South Australia. Waranta Takamuna! is a love letter to the island, but it’s also a love letter to talking truth to the hardships of how we got there and how we got taken from there.”

The hills and plains between Launceston and Hobart also bear the mark of colonisation, its pre-invasion landscape cleared and replanted into pastoral vistas. In another installation for Mona Foma, metal silhouettes appear to the east as you drive down the Midland Highway – a woman with a child atop a golden hill, and violent scenes between colonisers and Aboriginal men.

Trawlwoolway artist Julie Gough based these figures on a series of illustrated boards produced to accompany a 1828 proclamation by Lieutenant Governor George Arthur. Purporting to explain British justice to First Nations peoples and illiterate colonists alike, around 100 copies were painted and nailed to trees around the island. Today, in Gough’s installation The Missing, the images distill truths and fictions about its past in ways language cannot.

“It’s not my artwork – it’s a government document that I’ve released again, like a reissue,” Gough says. “It’s coming back to create a bigger conversation across a landscape that has been absorbed and owned by newcomers, colonists, particularly since the 1820s. So in a way I’m subverting the government’s intended use of it to remind everyone whose country it is.”

In an audio tour accompanying the route, Gough narrates the experience as we drive through the “epicentre of violence”, and the psychic and physical scars left upon the landscape. “Those figures are looking out at something that’s quite different to when they were first produced, as panels to be [nailed] on trees – there’s not that many trees down in the Midlands of the island now.”

I hate the word permanent – it’s like the statues of colonial monsters in public parks. Trawlwoolway artist Julie Gough

The silhouette of the woman and child might appear less violent than other figures in the series – but not to Gough. It’s from the first scene of the proclamation boards, depicting Aboriginal and non-Aboriginal men and women in European dress, with an Aboriginal woman holding a white child and vice versa.

“That to me is incredibly violent, but it doesn’t appear violent,” she says. “It’s meant to be, ‘we’ll live happily ever after’, but we don’t know what happened to around 200 Aboriginal children taken by colonists up to the 1850s who were intended to become domestic and agricultural servants. Many of them are unaccounted for. We are the collateral damage of that, those of us that come from children who were living with colonists. One of my ancestors was such a child, Dalrymple Briggs, so that figure, of the woman and child, is close to my heart.” 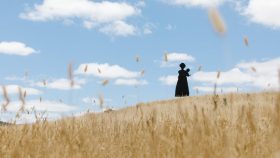 The Missing (2022) by Julie Gough on the side of the Midland Highway as part of Mona Foma. Photograph: Jesse Hunniford/Mona.

It’s something of a reclaiming, too. For over a decade, the route between Launceston and Hobart has been dotted with 16 silhouettes created by local artists Folko Kooper and Maureen Craig. Featuring convicts, soldiers, settlers and surveyors, they portray an Anglocentric view of the region’s folkloric history – something that had long troubled Gough. “They were a scratch I couldn’t itch,” she says.

Gough and project curator Trudi Brinckman consulted Kooper and Craig before embarking on the project. “They were fully supportive of this new inclusion, for a more expansive dialogue and mentioned they had attempted all those years ago, to work with people, to come up with Aboriginal figures,” Gough says. “But it just wasn’t the time.

“Now when I’m driving this highway and seeing those figures, I’m like, wow, we are tearing open that wound to be able to heal it better.”

At the other end of the highway, another work by Maynard and Ah Kee – titled Warr! – will take over the Parliament House gardens for the festival’s Hobart leg. Following the controversy that engulfed Mona Foma’s winter counterpart Dark Mofo in the wake of Spanish artist Santiago Sierra’s ultimately cancelled Union Flag project, works like The Missing, Warr! and Waranta Takamuna! underscore the value of empowering Aboriginal artists to tell their own stories.

Gough doesn’t know how long her figures will stay in place, and doesn’t mind either: “I hate the word permanent – it’s like the statues of colonial monsters in public parks. Let the landscape be permanent; let us humans work out how to be less so. Let nature be able to work on things.”