You are here: Home » Articles filed under: 'News' » Article: 'We demean our history when we turn the'

We demean our history when we turn the 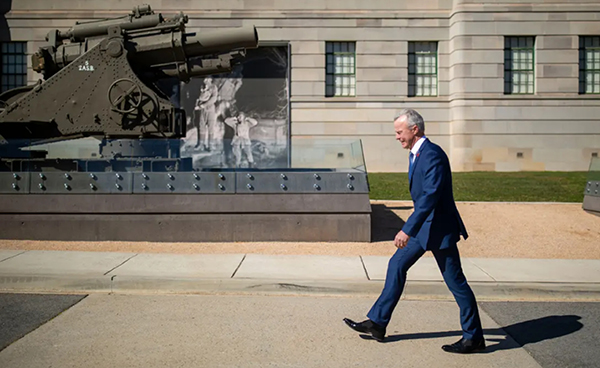 Under the seven-year directorship of Brendan Nelson, the Australian War Memorial has controversially begun to mount exhibitions about Australia’s involvement in current conflicts. Photograph: Sean Davey/AAP.

Paul Daley, We demean our history when we turn the Australian War Memorial into Disneyland, The Guardian, 5 September 2019

The Coalition’s $500m expansion plans deviate from the memorial’s mission, undermining what should be a space for quiet reflection.

Brendon Kelson is a former senior career commonwealth public servant whose many jobs included directing the Australian War Memorial from 1990 to 1994.

He turned 84 last week. When I last saw him, he was fit and feisty, smiling, and his eyes sparkling with wit. But he has been crook of late, in hospital with pneumonia; Canberra’s winters become tougher the older you get.

Still, late last week he managed to write from hospital to Darren Chester, minister for veterans and defence personnel, to reiterate his objections to the federal government’s plans to spend $500m on expanding the war memorial.

Kelson has long made his objections to an expanded memorial public. In June he wrote to prime minister Scott Morrison declaring the expansion – involving demolition of Anzac Hall, built in 2001 – an unnecessary “act of architectural vandalism” because the replacement structure was intended to accommodate “a growing collection of retired defence aircraft, vehicles and large technology” from recent and current conflicts.

“It [the memorial] … is not a military (hardware) museum, not a structural commodity to be rejigged at will,” he wrote.

Morrison recently gave a speech to the Institute of Public Administration (destined – for its hyperbole, doublespeak, childish metaphor and euphemism – for inclusion in a future volume of Don Watson’s famous dissections of fatuous bureaucratise), faintly praising the virtues of public service.

Odd, then, that he’d shuffle sideways the letter of such an esteemed (former) bureaucrat and arts administrator. The PM’s office had Robert Curtin, chief of staff to Chester, respond with a letter that addressed none of Kelson’s concerns and, with its emotive references and obfuscations, read like it’d been written by the current memorial director and driver of the Australian War Memorial expansion, Brendan Nelson.

Curtin explained an expanded memorial would be able to “tell the stories of the more than 100,000 Australians who have served on peacekeeping operations in East Timor, Afghanistan, Solomon Islands and on humanitarian operations … [it] will ensure we are able to record their stories, in their words and be able to share those stories to the more than one million visitors to the memorial each year”.

“It will also see the memorial create dedicated spaces for veterans and their families to retreat, reflect and come to terms with their service. It will ensure the memorial is a place not only to remember the dead, but to honour and help those who have returned from service in our name, in our uniform and under our flag.”

Under Nelson’s seven-year directorship the memorial has begun (controversially) to mount exhibitions about Australia’s involvement in current conflicts.

The memorial is a museum, archive and place of national remembrance. Its charter stipulates it must help Australia “remember, interpret and understand” the country’s war experiences. It is impossible for the memorial to adequately parse the myriad national impacts of conflicts to which Australia is still – or has recently been – committed to. That takes reflection and historical methodology only time can deliver.

Similarly, as Kelson pointed out in his response from hospital to Chester, it is not in the memorial’s mandate to provide medical services to returned personnel.

“While we honour all Australians who serve our country there are important distinctions between wars in their relative significance and in the numbers involved. Of the nearly 103,000 people named on the memorial’s roll of honour, 99% were killed before 1950. In the last 70 years, just over 1,000 have died in action. The memorial is obliged to present a historically balanced telling of the Australian experience of war,” Kelson wrote.

“Mr Curtin’s reply also focuses on the memorial’s well-intended efforts to offer therapeutic services for veterans suffering from PTSD and other health issues, and create ‘dedicated spaces for veterans and their families to retreat, reflect and come to terms with their service’. These are not memorial functions. The Australian War Memorial Act 1980 sets out … the functions and powers of the memorial. Servicemen, servicewomen and veterans figure nowhere in the Act. Services to current service people and veterans lie properly with Veterans’ Affairs and Defence; they are not for museum persons or [for] amateur psychotherapists located in museums.

“A former president of the Medical Association for Prevention of War, Dr Margaret Beavis, has said ‘the [memorial’s] healing claim is an astonishing trivialisation of the complexity and long-term treatment needed to successfully treat mental illness such as post-traumatic stress disorder (PTSD) and depression. The $498m spent on the war memorial is $498m not spent on veterans’ healthcare.’”

But the memorial under Nelson has interpreted its own Act to suit its over-the-top Anzac preoccupations. It has refused, for example, to acknowledge the fierce wars for sovereignty between Aboriginal people and red coats, militias and settlers across the pastoral frontier – battles that underlie the dark heart of Australian nationhood and upon which the white federation was built. Its reason? Because it’s not, apparently, in the Act and those conflicts don’t (this is highly contestable) fit the memorial’s own definition of war.

It’s stunning intellectual dishonesty – especially when the memorial now bangs on endlessly about the “Black Diggers” who served the imperial forces in uniform. That is a fig leaf for its continued refusal to honour the Indigenous fighters who resisted British invasion and died in greater number than the Australian 60,000-plus dead of the first world war.

The last word should belong to another revered public servant, Charles Bean, official historian of Australia in the first world war and founding father of the Australian War Memorial, who, as Kelson pointed out to the prime minister, wrote: “The national memorial building should not be colossal in scale but rather a gem of its kind.”

That’s the difference between a thoughtfully curated, inspiring museum that inspires quiet reflection and … well, Disneyland.

Positions Vacant » View All
» Training Officer – Sydney Living Museums
» Head of Digital Engagement & Insight – ANMM
Latest News » View All
Frog love songs reveal amphibian decline
AM & Frog ID explore habitat modification Read more.
QM explains mystery: ‘Giant moth invasion’
of Mt Cotton State School's surprise visitor Read more.
ANMM Haenyeo (sea women) exhibition
Hyungsun Kim's S Korean divers portraits Read more.
Social Media Benchmarking: Evaluation
in action at the Cleveland Museum of Art Read more.
SAM Wonders exhibition
165 years in 165 objects Read more.
Top +
Council of Australasian Museum Directors, c/o Ms Daryl Karp, Museum of Australian Democracy at Old Parliament House PO Box 3934 Manuka, Australian Capital Territory 2603 Australia, © CAMD 2021
Copyright: All information and resources provided on this website remain the copyright of the Council of Australasian Museum Directors. Permission is granted for viewing and downloading for personal and not for profit purposes. Those wishing to reproduce any materials for commercial, educational or other uses are requested to contact us.
Disclaimer: The content of this website is provided for information purposes only and is not intended as a substitute for professional advice. No claim is made as to the accuracy or authenticity of the content of the website. The Council of Australasian Museum Directors does not accept any liability to any person for the information or advice (or the use of such information or advice) which is provided on this website. The information on our website is provided on the basis that all persons accessing the site undertake responsibility for assessing the relevance and accuracy of its content. No responsibility is taken for any information or services which may appear on any linked web sites. Hostgator.
.