You are here: Home » Articles filed under: 'News' » Article: 'We love Museums!'

Yes, its official – the results of CAMD’s most recent (2012-13) survey of its members confirms the fact that Australians and New Zealanders love their museums and continue to flock to them in ever increasing numbers.

Drawing on past survey results, it is staggering to find that CAMD museums quietly recorded over 74m visits in total over the last five years.  While Australians and New Zealanders profess a great affection for sport and the great outdoors, it is clear that they also enjoy  a visit to their nearest major museum for an overseas blockbuster or to enjoy exhibitions and events which highlight their own national stories.

These figures are even more impressive given the relatively modest size of potential audiences in the Australasian region. To provide some striking points of comparison, in 2012-13:

So, the next time you have a free afternoon and are looking for a stimulating time, go with the flow and visit a museum.

* Visit numbers were based on data provided by CAMD’s 22 museums (which cover over 65 museum sites) in response to the annual survey.  Visit numbers are based on admission receipts/tickets and results from electronic counters, and in some cases manual counts, taken of visitors through the door. 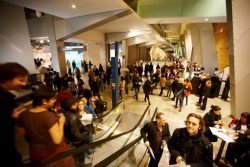 Smart Bar event at Melbourne Museum. Source: Museum Victoria
Positions Vacant » View All
» Exhibition Technician – Canterbury Museum
» Marketing and Campaigns Officer – WAM
Latest News » View All
Nadine Dorries 10th Culture Sec since 2010
“to fight the woke warriors at culture” Read more.
What place for public statues in the history of art?
Neil McGregor on value of retaining statues Read more.
Statues in the context of art sculpture
- modelling, animation & so much life Read more.
AHRC explores digital future of UK cultural
& heritage – links to Collecting the West Read more.
Aus research policy env “a slow tragedy
unfolding” business R&D 0.9% - 50% OECD av Read more.
Top +
Council of Australasian Museum Directors, c/o Ms Daryl Karp, Museum of Australian Democracy at Old Parliament House PO Box 3934 Manuka, Australian Capital Territory 2603 Australia, © CAMD 2021
Copyright: All information and resources provided on this website remain the copyright of the Council of Australasian Museum Directors. Permission is granted for viewing and downloading for personal and not for profit purposes. Those wishing to reproduce any materials for commercial, educational or other uses are requested to contact us.
Disclaimer: The content of this website is provided for information purposes only and is not intended as a substitute for professional advice. No claim is made as to the accuracy or authenticity of the content of the website. The Council of Australasian Museum Directors does not accept any liability to any person for the information or advice (or the use of such information or advice) which is provided on this website. The information on our website is provided on the basis that all persons accessing the site undertake responsibility for assessing the relevance and accuracy of its content. No responsibility is taken for any information or services which may appear on any linked web sites. Hostgator.
.