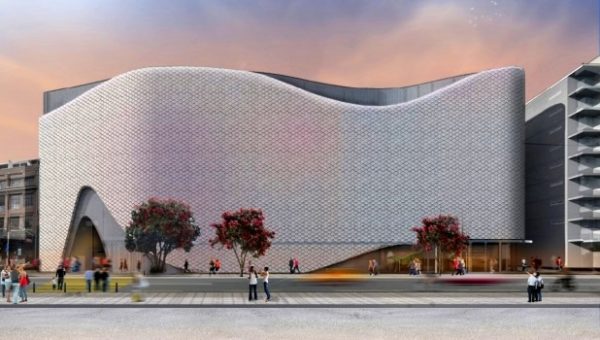 An artist impression of the $150m movie museum and convention centre that Wellington city council has decided to build. Source: Studio Pacific Architecture.

Wellington has landed its golden fish after city councillors voted to splash an extra $15 million of ratepayers’ money on an elaborate design for the city’s combined movie museum and convention centre.

All 15 councillors voted in favour of a proposed $150m Maui-inspired creation, which includes a 1100-seat conference centre and a museum run by Sir Peter Jackson and Sir Richard Taylor.

The alternative design, which fitted the previously approved $134.4m budget, was also an option for councillors. But designers said it could be a “building of anywhere”.

Designers Studio Pacific Architecture said the building could be clad with a “shingle-like skin” around a soft-flowing form, which would sell Wellington in the same way as the Opera House does for Sydney.

Construction  is expected to start early next year.

Commercial sensitivity was cited for councillors approving the plan behind closed doors on Wednesday.

The council was reluctant to discuss financial details until an agreement was formalised with Jackson and Taylor in November.