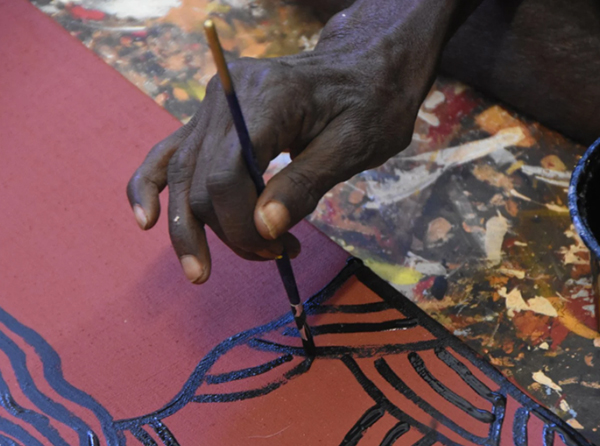 Since 1972, hundreds of artists have painted under the guidance of Papunya Tula, one of the most respected players in the world of Indigenous art.

In July 2021, Beyonce posted on her Instagram feed a photo of herself in front of an artwork by Aboriginal Australian artist Yukultji Napangati. It was one of two paintings that she and Jay-Z had purchased two years earlier during a solo exhibition by Napangati at New York’s Salon 94. While in New York for the exhibition, the artist had dinner in the Manhattan home of comedian Steve Martin. Her work has been exhibited around the world.

Napangati was no ordinary artist. Until she was a teenager, she had no contact with anyone beyond her desert homeland. She didn’t even know the outside world existed. She and eight other family members moved about the Gibson Desert, hunting kangaroos and goannas, and gathering bush foods as her people, the Pintupi, had for tens of thousands of years. They hid under bushes whenever planes passed overhead. When trucks and tractors left tracks in the sand, Napangati and her family wondered what giant animal had passed across the desert. 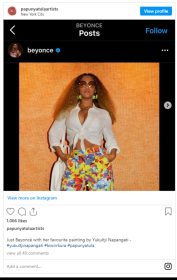 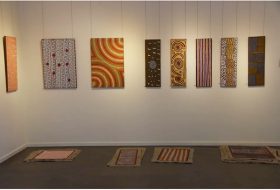 Papunya Tula has become one of the most respected players in the world of Indigenous art, with two art centers—one in Kiwirrkurra, the other in Kintore—and an art gallery, shown here, in Alice Springs. Anthony Ham,

In 1984, a father and his son were fixing a flat tire near the remote Pintupi settlement of Kiwirrkurra, close to the state border between Western Australia and the Northern Territory, when a nearly naked man brandishing a spear appeared over a sand dune. Frightened, the man with the car fired his gun into the air. Equally frightened, the man with the spear ran away. Over the days that followed, the Pintupi Nine, which included Napangati and her family, emerged from the desert, tentatively at first, and then they decided to stay; it was a time of drought and life in the desert was getting more difficult.

As part of the adjustment to town life, Yukultji and her sister, Yalti, spent time with Kiwirrkurra’s Pintupi artists. Kiwirrkurra’s art center did not open in its current form until 2011, so the artists, including many male friends and relatives, painted at ad hoc art studios around town, or on the verandas of local homes. With very few means of gainful employment or in-town entertainment, painting was both a popular pastime and a potential source of income.

By the early 1990s, a group of Pintupi women launched an initiative to start painting and earn income independently of their male family members. The sisters picked up brushes and began to paint. “No one taught me how to paint,” Yukultji Napangati told an interviewer on her first visit to Sydney for an exhibition in 2005. “I just started to paint.”

Her artistic career was launched by Papunya Tula, an Indigenous artists’ cooperative that provided the art materials to the women and sold paintings created in Kiwirrkurra. Like Napangati, Papunya Tula had obscure desert origins: in 1972, a group of artists from Papunya, a small Indigenous community in central Australia, established their own company. Starting out as an informal gathering of local men painting wherever they could find some shade, Papunya Tula has become one of the most respected players in the world of Indigenous art, with two art centers—one in Kiwirrkurra, the other in Kintore—and an art gallery in Alice Springs, a small desert city close to the geographical heart of Australia.

Papunya Tula still operates much as it did 50 years ago. The original 49 Indigenous owners or stakeholders and their families continue to own Papunya Tula, serve on its board of directors, and receive an annual dividend. Unlike many other Indigenous art galleries and companies, the Indigenous owners of Papunya Tula steer the direction of the cooperative and make all of the major decisions. Hundreds of artists across generations have painted under their guidance; at any one time, between 120 and 160 artists are on Papunya Tula’s books. And through it all, the cooperative has maintained its role as a founder and ethical custodian of the painting traditions of the Western Desert. 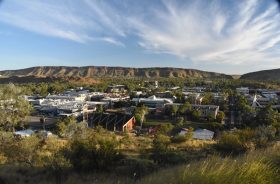 Alice Springs, a small desert city close to the geographical heart of Australia, is home to dozens of art galleries. Anthony Ham.

Everyone in Alice Springs, home to dozens of art galleries, has a story about unethical practices in the world of Aboriginal art. Private operators have been known to pay large sums of money to painters and their families, even plying them with free alcohol, so that the painters will create artworks specifically for their benefactors, who then sell the paintings at great profit; only a small percentage of the profits from such transactions reaches the artists. At a less extreme level, most galleries pay only after a sale is made, and many pay far less than half of a painting’s proceeds to the artist.

Papunya Tula is different. For starters, it pays its artists upfront, and pays as much as 60 percent of the expected sale price. Crucially, the artists get paid whether anyone buys the painting or not.

For acting manager Grant Rundell, Papunya Tula’s success and reputation also comes down to the cooperative’s deep roots in the communities with which they work. All are welcome at the art centers owned and operated by the cooperative. Anyone who wishes to paint is encouraged to do so, and urged to tell the story behind the painting. Beginner artists may be paid as little as $50 for a simple artwork, depending on Papunya Tula’s expert assessment of its market value. For established artists, they might be paid tens of thousands of dollars. Everyone who paints is considered a Papunya Tula artist.

His predecessor, Paul Sweeney, agreed. “There’s a learned experience in the process of creating the paintings. Part of Papunya Tula’s best practice is the conversation that goes on about what each painting is about: What’s the place? What happened there? What’s the story? Painting here is a form of storytelling that has been transformed into an economy. We created the economy 50 years ago, and it has given way to a tremendous degree of self-empowerment and self-employment.”

That economy began with some of the original paintings being sold in 1972 for as little as $20. They’re now worth hundreds of thousands of dollars. Artists like Napangati, Eileen Napaltjarri and George Tjungurrayi exhibit internationally; one Papunya Tula worker described Tjungurrayi as “the Salvador Dali of the Western Desert.” One painting by Clifford Possum Tjapaltjarri (1932-2002), one of the Western Desert’s elder statesmen artists, set the record in 2007 for a Papunya Tula painting when it sold at auction to the National Gallery of Australia for 2.4 million Australian dollars. Even at the level of non-elite artists, painting provides one of few reliable sources of income in remote communities where official unemployment rates sit at around 40 percent and are probably much higher.

It was time to see some of the paintings, and I stepped through the glass doors of the Papunya Tula Artists Gallery in Alice Springs. Australian writer Nicolas Rothwell once described the gallery, which has been around in some form since the 1980s, as “little short of the Florence Baptistery in its significance.”