You are here: Home » Articles filed under: 'News' » Article: 'What animal was that?'

What animal was that?

Tech-savvy animal lovers will be delighted with the latest announcement from Museum Victoria. In 2011 it launched a Victorian fauna field guide app which has since been downloaded over 50,000 times to Apple Devices. Now, with the assistance of the Australian Government’s Inspiring Australia initiative and the cooperation of major State and Territory museums, the app will expand to cover wildlife Australia-wide.

In a recent launch of the fauna app project at Melbourne Museum, the Hon Don Farrell, Minister for Science and Research and Minister Assisting on Tourism, said that,

“This project is a great example of the Government’s Inspiring Australia initiative in action,” Senator Farrell said. “Museum Victoria is working with state and territory museums and community groups across Australia to share research and knowledge with the general public.

“The Australian Government is investing in science and research at a record level and it is important that we continue to realise the full potential of that investment by sharing with the community the economic and social wealth science and technology delivers.

The apps can be used to help with spotting animals locally or while travelling. As the app downloads to the device rather than relying on an internet connection, people can use it anywhere – whether bushwalking in remote national parks, enjoying a day at the beach or in a local nature reserve. It will give the museums involved the chance to extend fauna information and usage to many thousands more enthusiastic citizen scientists.

The field guide apps are part of the Australian Government’s Inspiring Australia initiative and the project is among hundreds of projects and activities engaging people in the sciences throughout the length and breadth of Australia.

The fauna app project, which received a $390,000 grant to develop apps for each State and Territory on both iOS and Android platforms, adds more than 1,200 species to the 730 species already profiled in the Victorian app. 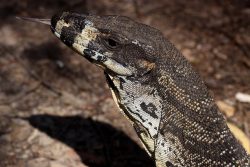 Goanna, Kurringai Chase National Park. Photo: Meredith Foley
Positions Vacant » View All
» Kaituhi Maori / Maori writer – Te Papa
» Interpretive Planner – AWMM
Latest News » View All
Powerhouse’s 5 new exhibitions
Eucalyptusdom to Electric Keys Read more.
10 new art museums
Opening globally in 2022 Read more.
“Activating Smithsonian Open Access”
- new models for interacting with collns Read more.
Outback Museum of Australia, Charleville
$8.34M through in Building Better Regions Read more.
British museums face long Covid’s effects
visitation halves from pre-pandemic levels Read more.
Top +
Council of Australasian Museum Directors, c/o Ms Daryl Karp, Museum of Australian Democracy at Old Parliament House PO Box 3934 Manuka, Australian Capital Territory 2603 Australia, © CAMD 2021
Copyright: All information and resources provided on this website remain the copyright of the Council of Australasian Museum Directors. Permission is granted for viewing and downloading for personal and not for profit purposes. Those wishing to reproduce any materials for commercial, educational or other uses are requested to contact us.
Disclaimer: The content of this website is provided for information purposes only and is not intended as a substitute for professional advice. No claim is made as to the accuracy or authenticity of the content of the website. The Council of Australasian Museum Directors does not accept any liability to any person for the information or advice (or the use of such information or advice) which is provided on this website. The information on our website is provided on the basis that all persons accessing the site undertake responsibility for assessing the relevance and accuracy of its content. No responsibility is taken for any information or services which may appear on any linked web sites. Hostgator.
.