You are here: Home » Articles filed under: 'News' » Article: 'What in the world is a herbarium?'

What in the world is a herbarium? 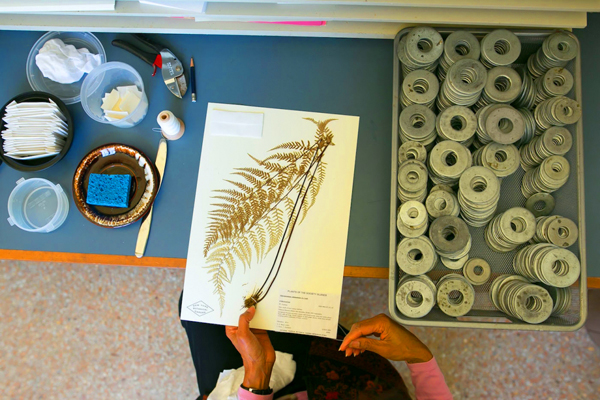 Allison Meier, Why a Herbarium of 7.8 Million Plants Is One of New York’s Most Valuable Resources, Hyperallergenic, 11 April 2017

The New York Botanical Garden is home to the world’s second-largest herbarium, a vital archive in an era of vanishing botanical collections.

After a corpse flower opened at the New York Botanical Garden (NYBG) last summer, drawing 30,000 visitors in the course of its brief and pungent bloom, it received the posthumous honor of becoming the three millionth specimen digitized from the Bronx institution’s herbarium. While NYBG is among New York City’s great green wonders, it’s also home to the world’s second-largest herbarium, created just after the garden was established in 1891. The William and Lynda Steere Herbarium now houses 7.8 million plant and fungal specimens, representing biodiversity from every continent. But what is a herbarium, you might ask, and why does it matter?

Currently, NYBG is celebrating the collection in What in the World is a Herbarium?, installed in the Ross Gallery of its Library Building. The exhibition comes at an important moment. In a 2015 article for the journal Nature, Boer Deng reported that over “100 North American herbaria have closed since 1997, leaving just over 600 remaining,” with budget cuts and a perception of them as obsolete threatening their survival. Like the NYBG herbarium, most operate out of public view, so “it’s very challenging to make the case at these small universities that its herbarium should be kept,” Pace said. He noted that NYBG often adopts “orphan herbaria,” for instance that of the Brooklyn Botanic Garden, on loan in the Bronx while its scientific facilities are updated.“Unless you work in botany, you really don’t know what a herbarium is and what this collection is, and its broad impact,” explained Dr. Matthew Pace, assistant curator to the herbarium, during a behind-the-scenes visit by Hyperallergic. Pace is a botanist studying the diversity and evolution of New World orchids. He walked me through the mounting room, digitization lab, and one of the four levels of cabinets that make up the archive of dead plants, a significant scientific resource.

The one-room show answers the titular question — a herbarium is basically a botanical library — and includes selected specimens that represent current research, historical context, and oddities, like the corpse flower, with its voluminous purple bloom now flattened on an acid-free sheet of paper. Nearby are a swamp rose collected by NYBG scientist Daniel Atha in his documentation of natural plants in Central Park; a curare specimen from the Amazon, along with a blow dart that uses the tropical vine’s poison; and a bright flower of the purple loosestrife from Europe that’s been a highly invasive species in the United States since the 1830s. A video display features the diverse focuses of NYBG scientists, whether Jessica Allen’s investigation into how climate change is impacting lichen distribution in the Mid-Atlantic Coastal Plain or Ina Vandebroek’s connections with Caribbean immigrants in New York who have medical plant knowledge. A herbarium can offer base data for studies of climate change, invasive species, habitat loss, medicine, and conservation. Pace estimated that 20,000 hours are logged by outside visitors to the NYBG’s herbarium each year.