You are here: Home » Articles filed under: 'News' » Article: 'What is civilisation?' 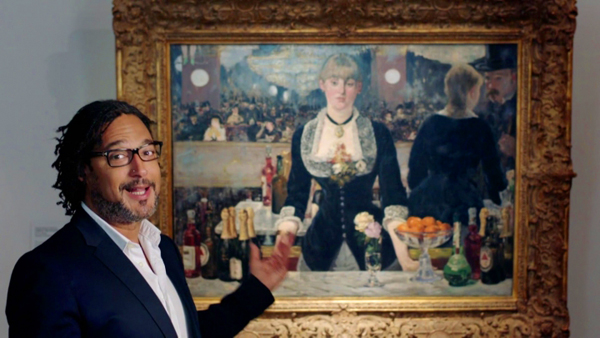 Still from Civilizations with David Olusoga presenting Manet’s “A Bar at the Folies-Bergère” in episode 8, “The Cult of Progress”.

Michael Press, The New BBC TV Series and What We Mean When We Say “Civilization”, Hyperallergic, 25 July 2018

PBS has now finished airing its series called Civilizations, a nine-part look at the global history of art, which is a well meaning but flawed production.

“At this historic moment … the provincialism of our traditional histories, which began with Greece and summed up Asia in a line, has become no mere academic error, but a possibly fatal future of perspective and intelligence.” As much as this judgment may seem to fit the rise of rightwing nationalism in our own historical moment, it was actually written by the American historian and philosopher Will Durant in 1935.  We can certainly understand Durant’s judgment, amid the rise of Naziism and the specter of a world war. And Durant would address the neglect of Asian history: he devoted the entire first book of his and his wife’s 11-volume The Story of Civilization to it. That first volume was called “Our Oriental Heritage,” and include Asian history up to the present, as a prelude to the subsequent ten volumes on European history from ancient Greece to Napoleon. Durant observed that, in his day, Asia was “swelling with resurrected life” (it hadn’t for the previous centuries?) and warned of a coming “all-embracing conflict between the East and the West.”

The problem Durant identifies may sound familiar, but his analysis and solution would hardly be satisfactory today. They point, however, to the challenge of writing history, especially the history of this thing we sometimes call “civilization.” Who is telling the story, when and where they are telling it, all have enormous effects on what it looks and sounds like. But one constant is that, among European and American histories of “civilization,” the word tends to stand for “Western civilization.” Like Durant, we are always trying, and failing, to move beyond our provincial views of human development as we write about it.

PBS has now finished airing its own series called Civilizations, a nine-part look at the global history of art. The series was produced by Nutopia for PBS and the BBC, with distinct versions of the series for each network. This meant that there were two versions of each episode, varying drastically from each other. Opinions of the series have also varied drastically: The Washington Post declared it “the most ambitious story about art ever told on television” whose success is based on it being “willing to tell big stories.” The Wall Street Journal, on the other hand, worried that the series was a “largely value-free approach to the world’s wonders” — except for its view of the West. “If there are any barbarians in this series, they are the denizens of Europe,” declared the Journal’s Eric Gibson. What are we to make of all this?

Civilizations reworks Kenneth Clark’s famous BBC documentary series Civilisation (1969). That series focused solely on the medieval and modern art traditions of Western Europe. The current one expands to the complete history of art of the entire globe — thus the change from singular to plural Civilizations — all the way from the Stone Age to the present. To deal with this vastly broader range, the series expands from one presenter to three: Simon Schama, Mary Beard, and David Olusoga. It seems these changes are geared to address criticisms leveled at Clark’s original series: it was blinkered, ignored the rich artistic traditions of the rest of the world, and featured a parade of great men (“one damn genius after the next,” in Beard’s own words) — discussed and analyzed by another great man.

At least on the surface, the current series displays a much greater attention to diversity. Some of the episodes, such as Beard’s “How Do We Look?” and Olusoga’s “The Cult of Progress,” make efforts to incorporate recent scholarly approaches to art and history, looking at the Western art tradition through the lenses of postcolonialism and gender studies. Among other things, they do a good job of highlighting the sometimes surprising interactions between Europe and the rest of the world.

The series has other things to recommend it, too. The presenters are all engaging. Above all, the cinematography is stunning. The use of drone cameras, slowly panning over a site or landscape or work of art, gives a sense of the grandeur that we might get on the spot.

But as viewers we keep coming back to this thing called “civilization.” What exactly is it? At times the series seems to equate it with “culture” or “society,” but at other times with “art” — and often with “high art.” With three different presenters writing their own episodes, it is predictable we would end up with different definitions. But the series makes no attempt to resolve the conflict among them, or even to acknowledge the differences.

And Civilizations is an odd choice for a title. It is an odd choice for a series that focuses on the history of art. More than this, “civilization” is a heavily loaded term, one that presumes an opposite: “barbarism.” Powerful countries (notably European powers) have used this dualism to justify war, conquest, removal of resources, and colonizing much of the rest of the world. This problem is sometimes acknowledged (clearly and effectively in “The Cult of Progress”), but for much of the series “civilization” is presented as an entirely unproblematic term.

It’s also odd, to say the least, that an art series called Civilizations focuses so much on individual artists and artworks (as opposed to broader, systemic understandings of art). Schama’s episode “Renaissances” introduces the idea of the “cult of the artist” in early modern Europe, contrasting it with views of art and artists in other places, such as Mughal India. Good — we see that our focus on the genius of the individual artist is not inevitable, but a cultural choice. It’s too bad that this insight is then left behind. Instead, the rest of the series largely pays homage to that very cult. So much of the later episodes involve one of the presenters standing in front of a work of art (usually a painting), studying it intently (to dramatic music), and then discussing it for the audience. Individual works are declared “revolutionary,” “a masterpiece,” “a master class” (Manet’s “A Bar at the Folies-Bergère” (1882) is called a “masterpiece” and twice a “master class,” all in just over a minute.) Van Gogh writes of a coming “messiah of art;” Matisse is the “fulfillment of that prophecy.” Artists are “giants” and “masters.” The European view wins out.