You are here: Home » Articles filed under: 'News' » Article: 'What makes a museum ‘fire-proof’?'

What makes a museum ‘fire-proof’? 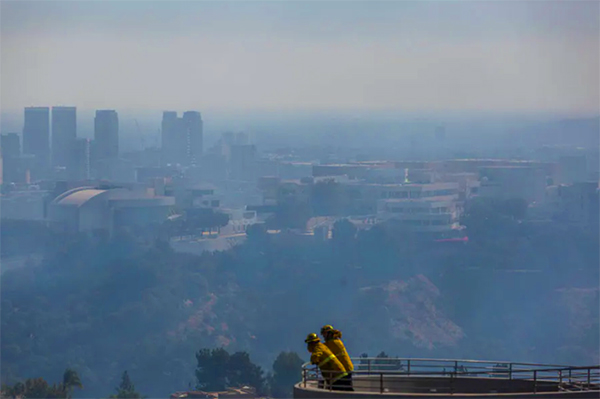 The ‘Getty fire’ in Brentwood, California on 28 October 2019 (with the Getty Center visible in the background). Photo by Apu Gomes/AFP via Getty Images

On the morning of 28 October, a brush fire dubbed the ‘Getty fire’ approached the Getty Center, a hilltop campus in Brentwood, Los Angeles that includes the Getty Museum and the Getty Research Institute. Swept across 600 acres of land by high winds, the blaze arrived from the north and the west but was slowed by the Getty’s sophisticated landscaping system, allowing fire services to intervene before its fire-resistant architecture could be scathed. News reports have, in recent years, heralded the complex’s ‘fire-proof’ design, yet the Getty’s director of facilities, Michael Rogers, says this has changed very little since the centre opened in 1997, with a fire prevention system that was first conceived in the 1980s.

Although effective fire prevention procedures have now been well understood for several decades, catastrophic blazes at treasured cultural institutions are a reliable fixture of the news cycle. Historic buildings designed before modern construction standards are particularly vulnerable, and modifications over centuries can result in complex layouts and hidden voids. Scenes of destruction at Notre Dame in Paris, the National Museum in Rio de Janeiro and the Glasgow School of Art all linger in recent memory. According to J. Andrew Wilson, who headed the fire protection and safety programme at the Smithsonian Institution until 2011 and now advises various cultural organisations, ‘There’s still a lot of ignorance among museum staff, many of whom don’t recognise fire hazards or believe that it won’t happen to them.’

Some of the biggest advances in recent years have occurred in the field of fire-resistant materials, including carpeting and wood that has been chemically treated. These, Wilson says, are too often overlooked by architects in favour of cheaper options. In the UK, the Government Indemnity Scheme, which provides insurance for institutions exhibiting loans of art, excludes potentially flammable works, including those with motors or moving parts. William Brown, the national security adviser to the Arts Council England, explains that artists are usually best placed to maintain their works but, as wires corrode on decades-old digital art, the threat to public safety may eventually outweigh the benefits of being displayed.

Although organic, combustible materials are making a comeback as the construction industry reduces its carbon footprint, the integration of automatic fire suppression systems can help quickly extinguish any accidental ignition. These systems include sprinklers, ventilation and smoke evacuation systems; Wilson goes so far as to suggest that the majority of museum fires break out in their absence. Activating as soon as smoke is detected, these measures inevitably respond faster than external fire services and their speed means they can be administered locally. A recent innovation for objects that are particularly vulnerable to water deluge, such as books, is the use of high pressure systems that emit delicate films of mist.

Installing automatic fire suppression systems is expensive but Wilson believes that the price pales in comparison to restoration work. ‘Every time there’s damage to a significant cultural institution we hear cries to rebuild and improve, but that’s a lot more expensive than installing preventative measures,’ he says. Brown says that retrofitting these features can be tricky, not least because the conservation of listed buildings tends to rule out drilling or attaching wall fixings, calling instead for battery-powered, wireless technologies.

When it comes to relying on local fire and rescue services, Brown suggests engaging with them early on and inviting them to get to know the property. ‘The fire service now have a statutory responsibility to safeguard heritage,’ Brown says, citing the Cuming Museum fire of 2013 as an example of trained officers from the London Fire Brigade successfully rescuing the substantial majority of a collection. In partnership with English Heritage and the National Trust, Brown runs a heavily subscribed salvage and disaster recovery course – currently booked for heritage workers, tutored in part by fire safety professionals.

Classified as a high-rise, the Getty Center is beholden to strict fire prevention rules, but its reinforced concrete and steel structure is further clad in fire-resistant travertine. One million gallons of water are stored on site but, with an HVAC system that monitors pressure and manages smoke, the sprinklers are a last resort. The centre is most admired for its surrounding landscape, which is meticulously irrigated and treated to an annual program of brush clearance and fuel reduction in preparation for the low humidity, high wind conditions of Californian autumns.

Taken as one holistic system, the Getty’s fire prevention system is state of the art. Everyone I speak to emphasises their commitment to freely sharing their expertise, and Brown says that, despite the differences in climate, museums and historic properties in the UK have paid close attention to the Getty. The benefits are spreading piecemeal, but new builds are increasingly being installed with similar systems so that they might reduce the risk of fire by design.