You are here: Home » Articles filed under: 'News' » Article: 'What to do if you find fossils or artefacts'

What to do if you find fossils or artefacts

October 14th, 2021 | Browse other: News. | Tagged with: Kronosaurus queenslandicus, What to do if you find fossils or artefacts | 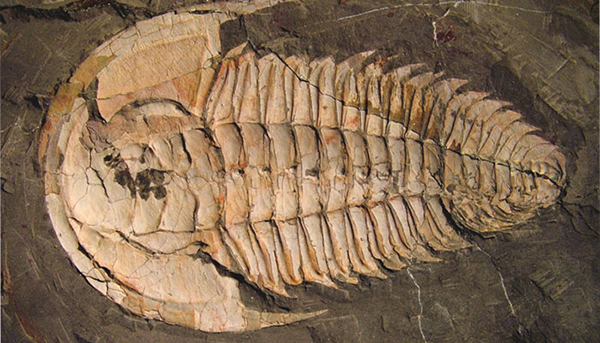 Past into present: A trilobite fossil, Redlichia rex found at Emu Bay, Kangaroo Island – a marine creature that lived over 500 million years ago during the Cambrian period.

Melinda Ham & Sally Hurst, What to do if you find fossils or artefacts, Macquarie University, 8 October 2021

Imagine stumbling on a fossil or Indigenous artefact on your property or in a public place. What do you do next? A new website offers some ideas. Six years ago, grazier Robert Hacon was driving around his cattle property in outback Queensland when he drove over what he thought was a cow skull.

When he turned his ute around, on the ground in front of him lay the 1.6 metre jaw bone of a Kronosaurus queenslandicus – an 11-metre-long marine creature with a crocodile-like head that lived about 100 million years ago. It turned out to be the most intact Kronosaurus jawbone ever found.

A year later, construction workers building Sydney’s light rail in Randwick uncovered tens of thousands of spearheads and tools used by Bidjigal or Gadigal peoples of the Eora nation, including evidence they traded with people from what is now the Hunter Valley.

So what should you do if you stumble on a fossil or an Indigenous artefact in your backyard, at the beach, in a local park, on a bushwalk or on a rural property?

For fossil discoveries, you still should inform your local council or museum, because if it’s a rare find, then it will contribute to our scientific knowledge.

Macquarie University Biological Sciences Masters student Sally Hurst is trying to answer these questions. She’s created a website Found a Fossil to start conversations about heritage objects, inform people of what steps to take, and who to contact if they find something, in a bid to celebrate, protect and preserve Australian heritage objects and the incredible histories they can reflect for future generations.

Honorary Professor in the Department of Biological Sciences, Glenn Brock, says the site will potentially engage thousands of people around Australia online who might have found an important fossil or an artefact and are not sure what to do next.

“It greatly improves our chances that more finds will end up in the hands of scientists who’ll recognise their significance,” says Brock who supervised Hurst during the project.

The website is part of Hurst’s research which includes surveying people’s understanding and attitudes to fossils and artefacts Australia-wide.

“There’s a huge gap in knowledge and information and so I saw it as an opportunity to do something,” Hurst says. “I’m passionate about palaeontology, archaeology and also an enthusiastic science communicator and this project has combined all my interests.”

“This project is also about starting these difficult conversations about preserving cultural histories of the land and its peoples, and being a cultural ally for First Nations Australians by celebrating their incredible history and heritage for all Australians and the world.”

What most intrigues Hurst is that through her website she’s engaging members of the public to become heritage stewards – increasing appreciation for, and protection of natural and cultural heritage items. She encourages them to photograph, record the GPS location, determine if there’s other similar objects nearby and then report their find.

“Fossils are really important,” Hurst says. “They give us information about the evolution and extinction of plant and animal species. They also tell us about our changing environment. We need to understand this to adapt to future changes.” Similarly, learning about artefacts deepens our understanding of the culture and traditional lifestyle of the oldest continuing culture known to man. More importantly, it generates conversations about how artefacts can provide opportunities to return cultural objects to their rightful Indigenous communities.

“Repatriation, and acknowledgement of who owns these artefacts and where they belong will assist in the reconciliation process in Australia.”

Own the land, own the fossil

The good news is that if you find a fossil on your private property in NSW, then you own it and you can decide what to do with it, says Hurst. “But you still should inform your local council or museum, because if it’s a rare find, then it will contribute to our scientific knowledge.” 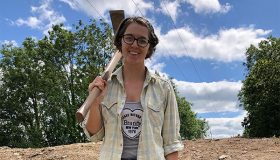 For fossil discoveries, you still should inform your local council or museum, because if it’s a rare find, then it will contribute to our scientific knowledge.

Also, it’s important to report it for preservation purposes. “If it’s been in the ground for a long time and then a storm or some kind of digging disturbs it, and it’s suddenly exposed to the air, it could rapidly deteriorate. A museum will know how best to take care of it,” she says.

If you discover the fossil in a national park, on a beach or someone else’s private property then you’ll have to get the landowner’s permission for what to do next.

Finding a cultural artefact is different as these objects are covered under a separate set of legislation, Hurst says. After growing up on a property in central NSW, Hurst knew of many farmers who had a box full of Aboriginal stone tools at the back of a cupboard, unsure of who to talk to about it. 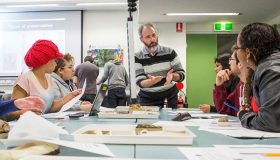 Treasures: Hon. Professor Glenn Brock, with students in his palaeobiology class, says the new website will help people who find fossils discover how to pass on important information to scientists.

“If you find a First Nations artefact on your property it does not affect your land ownership at all – you’re just encouraged not to disturb it as it may be culturally sensitive, and it is there for Indigenous Peoples to interpret. Many Indigenous peoples around Australia would love to start conversations with you about what you have found and about the rich history of the country and people.”

If someone does find a First Nations artefact on their land in NSW, they should report it to Heritage NSW, and can connect with their local First Nations community to learn more about the history of the area, provide opportunities for co-management of the heritage objects, or return the objects to their community for them to determine what they would like to do with them.”

On her website, Hurst also includes contact details for Heritage NSW and other heritage organisations in each state, and institutions such as museums, that can provide more information about heritage discoveries. It also links you to Fossils Australia to identify your fossil.

To further inform her website content, Hurst is conducting a survey of Macquarie University students to find out what they would do if they found a fossil or artefact. Early next year, she’ll launch an Australia-wide survey as part of her Masters project to gather information about what people would do if they did find something.

“My hope is that this project, and the website resources, will contribute towards the protection of Australia’s natural and cultural heritage for the future,” she says.

Visit Found a Fossil if you have found a fossil or artefact and would like more information on what to do next.

See also: A History Worth Protecting.