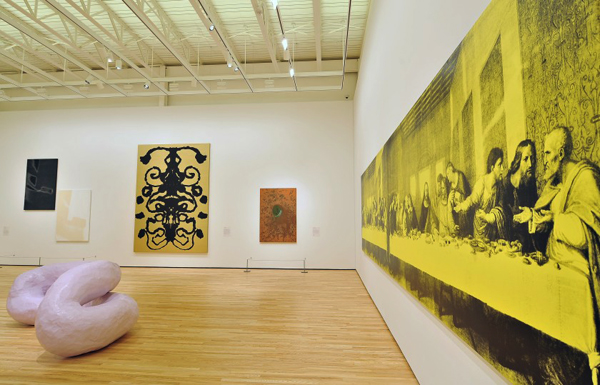 The Baltimore Museum of Art reversed course on plans to sell “The Last Supper,” an epic yellow work by Andy Warhol pictured here in the museum in 2012. (Matt McClain / Washington Post).

Part of a year-end series revisiting subjects of some of our most popular arts articles of the year.

For the art world, 2020 was the year that the Black Lives Matter movement spurred a deeper conversation about inclusion and equity, ultimately leading some museums to sell off works by certain artists — usually white, often male — ostensibly to diversify their permanent collections.

While deaccessioning pieces from collections is not unheard of, museums have historically followed ethical guidelines and invoked the process only when art is damaged or decided to be fake, or when it no longer fits their mission. But then COVID-19 came along.

Museums came under intense financial pressure as a result of pandemic-related closures. In April, the Assn. of Art Museum Directors approved a resolution specifying it would not censure museums that use funds raised from deaccessioning toward general operating expenses or collection care. A string of high-profile auctions followed, as did questions about whether some institutions were using the pandemic as an excuse to sell off works to correct long-running budget woes. 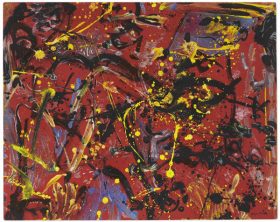 The Everson Museum in Syracuse New York auctioned Jackson Pollock’s 1946 “Red Composition,” notable for being the abstract-expressionist’s second foray into the drip technique for which he is best known. Although it was estimated to sell for $18 million, the painting sold to an anonymous bidder for $12 million at an Oct. 6 Christie’s auction.

In an FAQ posted on the museum’s website, the Everson said proceeds from the sale would be used to “establish a fund for acquiring works created by artists of color, women artists, and other under-represented artists,” as well as for the direct care of the museum’s collection of more than 10,000 works.

Critics lambasted the museum for the decision to part with the historically important work, despite the stated intent. “The goal of diversifying white patriarchal patterns of museum art collecting is hugely important,” wrote Times art critic Christopher Knight. “This sort of quick fix belies the seriousness. The end not only doesn’t justify the means, these processes do real damage.”

In response to critics like Knight, Jessica Arb Danial, president of the Everson’s board of trustees, wrote an article in the Art Newspaper defending the sale. “We are slowly building a collection relevant to our community, with art that is representative, inspirational, and more current than ever before — an accomplishment, to me, that is greater than any single piece in the collection,” she said.

A museum representative told The Times via email that earnings from the fund would not be spent until late 2021; however, recent acquisitions reflect the museum’s commitment to expanding the scope of its collection. The list includes work by Sharif Bey, Ellen Blalock and Ellen Lesperance, as well as a totemic fabric piece by L.A. artist Shinique Smith, approved just last week.

“We hope the funds will generate approximately $450,000 to $500,000 annually to be split between acquisitions and direct care expenses, but this will need to be approved by our finance committee,” the representative said.

The Palm Springs Art Museum raised eyebrows with its deaccession of a mammoth 1979 canvas by Helen Frankenthaler titled “Carousel.” The work sold for $3.9 million to an anonymous bidder at an Oct. 28 Sotheby’s auction, above an estimate of $2.5 million to $3.5 million.

A museum representative said via email that a “small portion” of funds from the sale would be used for care of the collection, and the rest would go to the Steve Chase Art Acquisitions fund, named for the late interior designer who donated the work. The Palm Springs museum has struggled to cover operating expenses as closures have extended for months.

“Under COVID-19, we’ve had a really hard time, primarily not as much about philanthropy, but primarily because we have no way of earning income through admission, through facility rentals, activities of the Annenberg Theater, the store and the restaurant,” museum Executive Director Louis Grachos told the Desert Sun in October.

The Brooklyn Museum is continuing a major deaccessioning process, which predates the pandemic. Its goal is to build a $40-million endowment that can generate $2 million a year for a collections care fund. The museum has raised more than half of that goal, a museum representative said via email.

On Oct. 15, the museum raised $6.6 million through Christie’s sales, which included Lucas Cranach’s “Lucretia,” which fetched $5.1 million. Subsequent sales through Sotheby’s featured works by Jean Dubuffet, Claude Monet, Edgar Degas, Joan Miró and Henri Matisse, as well as a collection of Fabergé objects. A museum representative said that no sales were confirmed for next year, but because “this is an ongoing deaccessioning effort, it is likely that we will be selling additional artwork as the process continues.”

Perhaps the most controversial deaccession plans this year were tied to the Baltimore Museum of Art, which announced in October that it would sell art valued around $75 million from its collection, anchored by three major works by Pop artist Andy Warhol, Minimalist Brice Marden and Abstract Expressionist Clyfford Still. The Marden and the Still were scheduled for a Sotheby’s auction on Oct. 28, and Warhol’s massive 1986 “Last Supper” canvas was offered through a private sale. The sale was to establish an Endowment for the Future that would “dedicate funds for the care of the collection and allow the museum to expand its ongoing diversity and equity programmatic initiatives by enacting greater structural change within the institution and increasing access for the community.”

Knight argued that the BMA was putting the cart before the horse in finding a need and “then trolling through its valuable art collection looking for ways to fund it.” In the process, he wrote, the museum would thereby “stomp all over best practices for deaccessioning art, as if no such standards exist.” Artists Amy Sherald and Adam Pendleton resigned from the museum board. Two former board chairmen pulled $50 million in promised donations in protest. Two dozen museum supporters and former trustees wrote an angry letter to the state attorney general and secretary of state, asking them to stop the sales.

Just two hours before it was set to begin, the museum halted the auction, perhaps in response to a “clarification” issued by the museum directors association, specifying that its revised deaccessioning policy was not for long-term goals, only for short-term collection care.

The BMA released a statement saying: “Our vision and our goals have not changed. It will take us longer to achieve them, but we will do so through all means at our disposal.” The museum dedicated itself to only collecting work by female-identified artists in 2020. More than half of this year’s acquisitions, the museum said, were made possible by a controversial 2018 deaccession of seven works by Warhol, Rauschenberg, Franz Kline and others.

The most recent deaccession came this month in Long Beach, where the Museum of Latin American Art tried to auction 59 artworks from its permanent collection to diversify the artists it shows — their country of origin, their gender and the materials with which they’re working. A representative said 44 of the 59 — about 3.3% of the museum’s total holdings — actually sold. All of the 44 works that sold were by male artists including Mexicans Rafael Coronel and Rodolfo Morales, Brazilian Walter Goldfarb, Cuban Wifredo Lam and Chilean Roberto Matta. MOLAA chief curator Gabriela Urtiaga told The Times that her bucket list for acquisitions included work by Los Angeles artist Judy Baca, Brazilian painter Tarsila do Amaral, Cuban American artist Ana Mendieta, Colombian artist Beatriz González, and Frida Kahlo.

The auction, which generated about $200,000 total — less than the high auction estimate of $474,000 — included about 80 pieces donated specifically for museum fundraising, prompting Knight to suggest that the museum diversify its collection through means other than deaccession. “Museum collections are strengthened by the addition of important art,” he wrote, “not by its subtraction.” Chief curator Gabriela Urtiaga defended the move: “The museum is a living and breathing institution, adapting to its contemporary time.”