You are here: Home » Articles filed under: 'News' » Article: 'When you work at a museum'

When you work at a museum 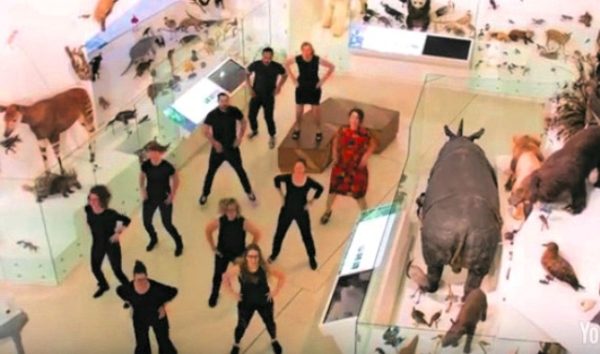 Australia’s most famous racehorse moves his hooves to the groove in a new dance video produced by Museum Victoria staff.

Recorded for the international Museum Dance-Off competition, the video opens with Phar Lap wiggling in time to music.

Staff then show off their moves — and the museum — to the rhythms of Fatboy Slim’s 2000 dance hit Weapon Of Choice.

The video includes scenes in the museum’s indoor forest display, as well as workers in white coats and blue latex gloves dancing among shelves of taxidermy.

Museum Victoria’s Helen Privett allayed fears that museum staff were pursuing dance fame at the expense of their day jobs.

“We did most of the filming outside of the museum’s normal operating hours,” she told 774 ABC Melbourne‘s Red Symons.

“People came in and did extra time so they could participate in this.”

This is the third year the video competition has been run by the blog When You Work At A Museum, which usually features gif-laden posts about life as a museum worker.

The 2016 competition has attracted 35 entries from museums across Australia, Europe and North America.

“It’s an opportunity for museums to do something a little bit different,” Ms Privett said.

Entries are grouped into daily rounds of three to four videos, with the winner of each round decided by popular vote.

At the time of writing, Museum Victoria’s video was in second place in its round of voting behind an entry by the Missouri Historical Society.