You are here: Home » Articles filed under: 'News' » Article: 'Where are Tasmania’s oldest graves'

Where are Tasmania’s oldest graves 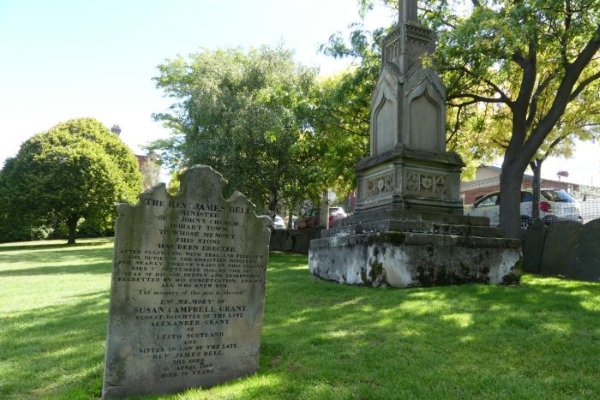 Many early settlers, convicts, church leaders, and others are buried in and under Hobart. (ABC News: Andy Cunningham).

Ainsley Koch, Where are some of Hobart’s earliest graves and who is buried there?, ABC News, 18 April 2019

Ever heard the saying ‘if you get a cold shiver down your spine, you could be standing on someone’s grave’?

If you live in Hobart, that could be the case.

Buried beneath Hobart’s schools, churches, and some private dwellings are thousands of convicts, Indigenous Tasmanians, and early settlers.

The city is home to numerous gravesites where church leaders, notorious bushrangers and even an ancestor of media mogul Rupert Murdoch lie.

One Curious Hobart reader asked the ABC where some of the city’s earliest gravesites can be found and who might be buried there.

According to the Hobart City Council’s senior cultural heritage officer Brendan Lennard, there are many secret burial sites hidden from the naked eye; so you never know when you may be standing on someone’s grave.

And believe it or not, some of those graves have been known to move.

“Most got turned into parks or schools,” Mr Lennard said.

“There are a few out in New Town and up at Hill Street in West Hobart that actually had subdivisions and residential houses [and] estates built on them.

“Every so often, when people are digging in the garden, they come across fragments of coffins or human remains occasionally. It’s quite interesting.”

Tucked away in a small pocket of Hobart’s CBD, St David’s Park is Tasmania’s oldest gravesite.

Tasmania’s first Lieutenant-Governor David Collins is buried in the park, along with dozens from the First Fleet and other prominent Tasmanians.

Notable Tasmanians buried there include maritime surveyor Thomas Burnett and his family; mariner, explorer and port official James Kelly; and the man who inspired the name for the east coast town of Bicheno, public secretary James Bicheno.

The cemetery closed in 1872 following the last burial and eventually the park fell into a state of disrepair with graves hidden by overgrown vegetation by the turn of the 20th century.

Nearly a century later, the Hobart City Council reopened the site as a public park and the old gravestones were placed on the walls surrounding Hobart’s Supreme Court to keep the memories of the dead living on.

But the park’s ghoulish history has become a little too detectable at times and the graves have been known to move, according to Mr Lennard.

“Every so often, depending on the conditions, sometimes you see the undulations in the park, in the grass, where the coffins have collapsed,” he said.

“Sometimes if they had a brick vault, the brick vault might have collapsed and so the soil has actually dipped in.

Hidden from the unsuspecting children who attend Campbell Street Primary School, near Hobart’s CBD, are about 5,000 convicts buried beneath the grounds.

The only evidence of what lies below is a plaque erected by Hobart historian Brian Rieusset 19 years ago.

Mr Rieusset said the site was formerly known as the Holy Trinity burial ground and was used for convicts who died at the Campbell Street Convict Penitentiary, located just a few hundred metres down the road.

“With more convicts arriving they needed somewhere to bury convicts away from the general population, so they set up the Campbell Street burial ground just for the convicts,” he said.

Mr Rieusset believes there were less than 20 bodies exhumed and moved to the Cornelian Bay Cemetery, three years before the school was built in 1926.

Many records were lost during the process, including those of Phillip Palmer who was the main chaplain at Trinity Church and Convict Penitentiary.

“His remains were there and they were removed from Cornelian Bay but no record was ever kept of where they are,” Mr Rieusset said.