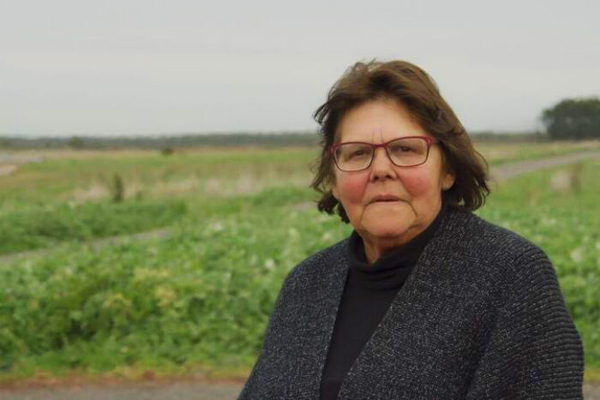 Gunditjmara woman Eileen Alberts was told of the massacres by her father and great uncle. Photo: Museums Victoria.

Eileen Alberts, 64, has been hearing about the massacre of her people for as long as she can remember.

The Gunditjmara woman grew up near Portland in south-west Victoria.

On the coast just out of town is the site of Victoria’s oldest known massacre, Convincing Ground, where between 60 to 200 Indigenous people were killed in a dispute with whalers.

When Ms Alberts was a child, her family would pass the site twice weekly as they drove her great uncle to work in Portland.

Was Lachlan Macquarie a “mass murderer who ordered the genocide of Indigenous people”? Let’s look at the facts.

“My great uncle and my father would tell us about it and then they started telling us about all the other areas where these massacres occurred.”

Stories like Ms Albert’s are being told in a new exhibit at the Melbourne Museum.

Curator Genevieve Grieves said the stories seek to fill a gap in what has been documented of massacres in written reports, newspapers, court documents and Aboriginal records.

‘These stories are unrecognised’

The film covers massacre sites across Victoria and explores issues including the role of the Native Police, resistance from Indigenous clans and tribal justice.

The oral storytellers are filmed at the sites of the massacres they speak about, often serene places of natural beauty that reveal nothing of their dark past.

“Largely these stories are unrecognised. At lot of people know that violence did occur as part of invasion but they don’t know the details of that,” Ms Grieves said.

“These places aren’t memorialised generally, so a lot more work needs to be done in terms of sharing, acknowledging and recognising these histories.”

According to University of Newcastle historian Lyndall Ryan, at least 1200 Indigenous Victorians were killed in 40 massacres from the 1830s to the 1850s.

Armed white settlers or stock-keepers, often on horseback, would conduct massacres as a form of ambush on Aboriginal camps in the night or early morning.

“It seems that many of the settlers who arrived in Victoria came from Tasmania where there were a lot of massacres,” Professor Ryan said.

“The Victorian story is very important to understanding frontier massacre in the rest of eastern Australia.”

Retelling of history now an opportunity to heal

Aboriginal massacre in Australia has long been a source of controversial and contested historical narrative.

Indigenous people have become a postscript to Australian history thanks to a belief in the superiority of white Christendom, writes Stan Grant.

In the early 1990s, Victoria’s Koori Heritage Trust sparked controversy when it produced the first map of known massacre sites across the state.

Now the Melbourne Museum has taken that map and turned it into an interactive display as part of its new exhibit.

Professor Ryan said the museum is the first major cultural institution in Australia to her knowledge confront this dark history so directly.

For Eileen Alberts, the massacres that decimated her people were a war that lasted for at least 30 years, but that history is now an opportunity to learn and heal.

“It’s history. We recognise what’s happened in the past but we have to move on,” she said.

“Our massacres have been white-washed to such a degree that people don’t really think about it. It’s really time for the real stories to come out.”