May 27th, 2021 | Browse other: News. | Tagged with: Historic England, The sad shameful demise of the Whitechapel Bell Foundry | 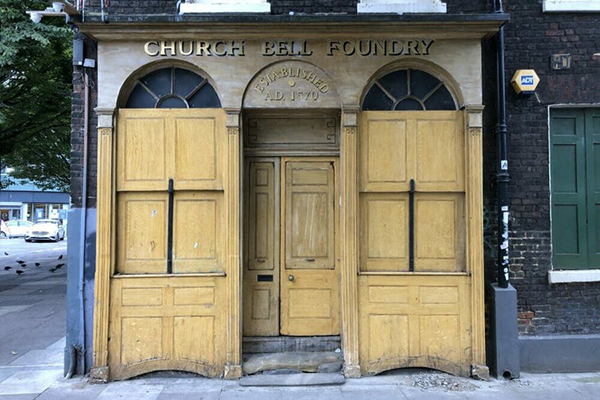 I can scarcely bear it.

After four years of local activists fighting and campaigning and holding meetings, sometimes weekly, for fundraising, the government minister Luke Hall, acting on behalf of the secretary of state Robert Jenrick, has made a decision. The Whitechapel Bell Foundry will be turned into a hotel. Four and a half centuries of bell-making in Whitechapel have gone to pot and another bit of British history will be turned into an ersatz coffee bar – what Historic England, in its wisdom, and with its responsibility for the preservation of the historic fabric of England, calls ‘adaptive re-use’ – a totally weaselly term, which allows its commissioners to celebrate the plundering of the past for the purposes of private enrichment. Perhaps that’s not surprising now that all trustees are going to have to take an oath of loyalty to the Prime Minister.

This feels like one of those moments in the history of planning law that is symbolic above and beyond the specifics of the case.

Two issues stand out. The first is that Robert Jenrick helpfully intervened when Tower Hamlets gave permission. This government presents itself as patriotic – all this stuff about schools being required to raise the flag every morning, every minister being photographed with a Union flag in their living room, the absurdity of the monstrously tacky press room in Downing Street, covered in flags, which was abandoned as fast as it had been created by Russian contractors. But, of course, it is play-acting, a superficial veneer for their rather brutal capitalism. They are happy to use British history for their own purposes, but when a decision comes about protection and preservation of a living monument of the past, instead they support an American vulture capitalist. A hotel for passing tourists is more important than a bit of living history. You can feel that mood in the City, where so little is left of the historic fabric. Instead, it is more like Hong Kong.

The second issue relates to Historic England. Maybe it can rebrand itself as Ex-Historic England: a public body that gives paid advice to property developers to encourage them to get through the existing planning systems, during a time in which so many of the planning controls are themselves being dismantled. I hope that the commissioners of Historic England, who have so conspicuously failed in their public duty, might consider what went wrong: why they did nothing; why they have allowed this to happen in such a conspicuously supine way.

In 2019/20 Historic England received £87.1 million from HM Treasury via the Department for Culture, Media and Sport to ‘protect, champion and save the places that define who we are’. Yet it has sat on its hands and allowed England’s oldest place of manufacture to be butchered and turned into a hotel. Not one single one of its 884 staff (the headcount in 2019) has lifted a finger to protect the foundry, but instead, they have worked in league with the developer, accepting payment for their advice. Can it truly claim to be fulfilling its role?

At the end of the road of the Whitechapel Bell Foundry, I would like to thank and celebrate the work of Re-Form Heritage and Factum Arte, which put forward such cogent and well-considered plans to protect the foundry and reinstate it. And also to thank all those people who contributed large and small sums to the appeal. Hundreds and thousands of people have written and campaigned to save the Whitechapel Bell Foundry – but alas, to no avail.

Correction: This article originally stated that the secretary of state made the called-in decision on the Whitechapel Bell Foundry. A spokesperson for the Ministry of Housing, Communities and Local Government has clarified that the decision to approve the hotel proposal was made by Luke Hall ‘on behalf of the Secretary of State’ and this article has been amended accordingly. The formal letter in which the ministry announced the decision states that ‘this decision was made by the Secretary of State’.

A version of this article first appeared on Charles Saumarez Smith’s blog.