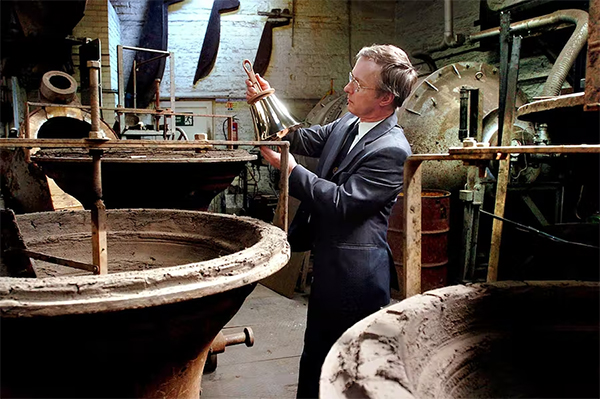 The television presenter Alan Hughes in the foundry in 2012. Photograph: REX/Shutterstock.

Charles Saumarez Smith, It’s time for the Whitechapel Bell Foundry to get back to business, Apollo, 14 October 2022

In May 2021, I reported in Apollo how the then housing minister Luke Hall had granted the US equity firm Raycliff Capital planning permission to redevelop the Whitechapel Bell Foundry into a luxury club-cum-hotel. The plans involved knocking down the 1980s industrial space to create a grand entrance foyer and turning much of the ground floor into a cafe and area where small handbells would be made as part of a bogus visitor attraction (this was added in to help secure planning permission and may have also helped to make the scheme economically impractical). It seemed like the bitter end of what had been a five-year campaign to preserve the building as a proper working foundry, part of the fabric of local East End life and a remarkable, if not unique, survival of 18th-century London artisan manufacturing.

Fortunately, it came to nothing. Raycliff Capital must have had a change of heart during the pandemic, perhaps wearied by the long campaign and recognising, as had been pointed out during the public inquiry, that there are now several other hotels in the neighbourhood. And so the building is back on the open market, listed with Pilcher, a prominent Savile Row commercial property agency with a track record of letting buildings to art galleries.

During the planning inquiry, an alternative scheme was presented to the planning inspector to demonstrate how it would be possible to retain the entire site as a working foundry under the auspices of Re-Form, a charity which has successfully demonstrated, with Middleport Pottery in Stoke-on-Trent, how a historic site can work in a semi-commercial way, retaining traditional methods of manufacture as a form of living history. Re-Form proposed working in partnership with the Factum Foundation, the charitable arm of Factum Arte, an artists’ fabrication business based in a suburb of Madrid, which has experience of making traditional craft skills financially sustainable by working with contemporary artists. 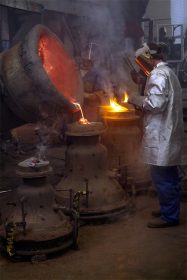 Since the proposed concept successfully demonstrated how the building can still feasibly work as a foundry, the planning inspector should not, in retrospect, have granted permission to Raycliff to allow change of use. A happy outcome would be if Tower Hamlets, as the local planning authority, and Historic England could now acknowledge these plans which would see the Bell Foundry retain its historic character both in terms of its use and architecture, rather than being transformed into a hotel or made antiseptic by becoming an art gallery – though the latter might be preferable as it would involve less disruption of the historic fabric.

The Factum Foundation has a long-standing interest in the preservation of traditional craft skills and their development through digital technologies.  As part of the original proposed scheme, they established the London Bell Foundry, a not-for-profit organisation designed to advance the cause of bell-making by contemporary artists. The organisation has already produced a bell designed by Grayson Perry which was shown in the Royal Academy’s Summer Exhibition this year and at the Worshipful Company of Founders’ livery hall during the annual Open House festival. During the planning inquiry, the lawyer representing Raycliff pooh-poohed this scheme as financially unworkable, but the London Bell Foundry has ambitious plans for its future artist commissions backed by the expertise of Nigel Taylor, the foundry’s former bell production manager.

The best solution would be if Raycliff were to sell the property to the London Bell Foundry. If a price can be agreed, it would be possible for the foundry to quickly resume its operations. The fabric of the building is still in reasonable working order and would soon recover its previous light-industrial character, perhaps with the reinstalment of some of the original equipment. The organisation also hopes to use the rooms at the front of the building as an archive documenting the history of bell-making, which would be accessible to the public.

This would surely be preferable to this historic building becoming just another commercial art gallery.

Charles Saumarez Smith is an art historian based in London. He was formerly Secretary and Chief Executive of the Royal Academy (2007–18) and director of the National Gallery (2002–07).