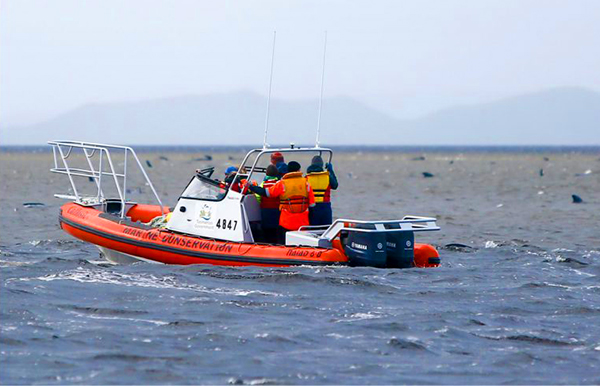 Rescuers have been using boats to survey the scene and escort survivors to deeper water. Photo by Patrick Gee, The Mercury.

This week David Hocking, Research Fellow at Australia’s School of Biological Sciences, Monash University, and our Curator Vertebrates Felix Marx wrote the following short article for Monash Lens, the University’s in-house journal, on the ongoing pilot whale mass stranding in Tasmania. It is reprinted here in its entirety.

There is some doubt as to the reason why they [dolphins] cast themselves on the land, for they say that sometimes they appear to do this without any cause.
– Aristotle, Historia Animalium (transl. Richard Cresswell)

This week the usually quiet spot of Macquarie Harbour on Tasmania’s west coast became the scene of what may be Australia’s largest-ever whale stranding. 470 long-ﬁnned pilot whales came ashore, and despite rescue eﬀorts by volunteers and the Tasmania Parks and Wildlife Service, almost 400 of them have died.

The scale of this tragedy is heart-wrenching, yet this is not the ﬁrst time that pilot whales have stranded en masse in our region. In 1918, a staggering 1,000 whales came ashore on the Chatham Islands to the east of New Zealand. In 2017, more than 400 whales stranded at Farewell Spit in New Zealand’s South Island. And in Tasmania, about 200 animals stranded on King Island in 2009.

So, what are pilot whales? And why do so many of them meet their doom ashore?

Despite their name and respectable body length (5–7 m), pilot whales are actually members of the dolphin family. There are two species, distinguished primarily by the length of their ﬂippers, number of teeth, and shape of the skull. The animals that stranded in Tasmania belong to the ‘long-ﬁnned’ variety (Globicephala melas) commonly found in the North Atlantic and Southern Ocean.

Pilot whales are excellent divers and forage at depths of up to 1 km. To navigate and ﬁnd food in this dark environment, they rely on a sophisticated type of biosonar known as echolocation. They primarily target squid, and tend to suck in – rather than bite – their prey.

Like many other dolphins, pilot whales are highly social. They live in stable family groups or ‘pods’ comprising 20 to 100 animals, although much larger numbers have also been recorded. Females can live past 60 years, and (based on observations on the short-ﬁnned species, Globicephala macrorhynchus) are among the few animals known to experience menopause.

Pilot whale stranded on the shoreline of Macquarie Harbour. Photo by Patrick Gee, The Mercury.

Why whales strand has perplexed observers since the days of Aristotle. In truth, there is probably no single answer. Disease and old age likely play an important role, but they cannot easily explain why pilot whales strand in such large numbers, and often in the same spot. For example, in 2009, 80 pilot whales came ashore in Hamelin Bay, Western Australia. Nine years later, another 150 whales stranded on the same beach.

Similar strandings hotspots occur elsewhere and seem to have something in common: gently sloping sandy beaches that can reﬂect echolocation clicks away from the animal that produced them. With no echoes returning from the beach, you could be forgiven for thinking that the area ahead of you is open water.

For oceangoing pilot whales (and other deep divers like sperm whales), this situation may quickly become confusing. Once drawn into shallows, perhaps in pursuit of food, they struggle to ﬁnd their way out again. Combine this situation with natural traps like sand spits and a rapidly receding tide, and you have all the ingredients for a whale-sized disaster.

Why do so many whales strand at once?

Tragically, mass stranded pilot whales may fall victim to one of their greatest assets: strong familial ties and social bonds. When one of them gets into trouble, others stick around in an eﬀort to stay together. Whether sick, dying or simply confused, one animal getting lost in the shallows may lead many others into danger.

Strong social ties also can hamper rescue eﬀorts. Surprisingly, reﬂoated whales often don’t just swim oﬀ. Instead, they turn around and head back to their family on the beach. The impulse to remain with their pod seems greater than their own survival instinct. To manage this risk, whales are often reﬂoated and herded into deeper water in groups. 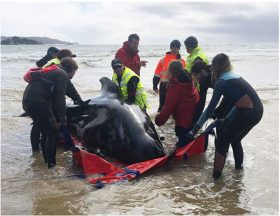 Is there much we can do?

Most mass strandings elicit an immediate response, and a rescue eﬀort that may last several days. We have learnt much about how to handle the animals while on the beach, and the best techniques for returning them to sea. As of now, rescuers in Tasmania have successfully returned 70 animals to the safety of deeper water. This is equivalent to a whole busload of individuals that can now continue their lives thanks to this monumental eﬀort.