You are here: Home » Articles filed under: 'News' » Article: 'Why returning 4600 Old People to Country'

Why returning 4600 Old People to Country 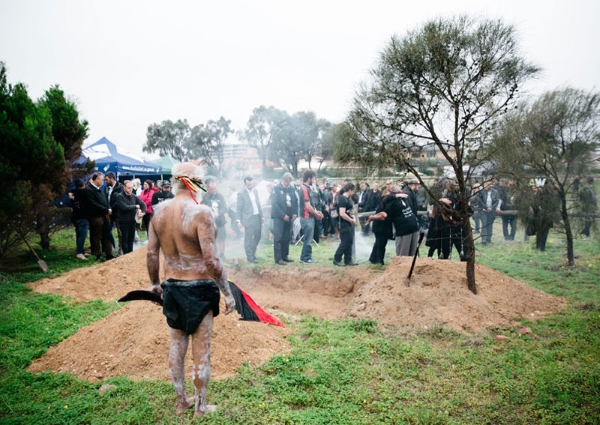 Walter Marsh, Why returning 4600 Old People to Country is the duty of all of South Australia, The Adelaide Review, 27 April 2019

As institutions around the world work to return Aboriginal ancestral remains to Country, more than 4600 Old People wait in storage at the South Australian Museum. A new Museum policy has committed to their repatriation, but to complete this massive task will require non-Indigenous South Australia to join the journey – and reckon with its own complicity.

“No one wanted to be accountable; once these burial grounds got dug up or our Old People were found, they’d quickly bring them to the Museum,” Kaurna Elder Jeffrey Newchurch tells The Adelaide Review. “The question didn’t really come in until the Aboriginal Heritage Act in 1988 gave Aboriginal people a position – even if that was only through conversation or small-time engagement.”

“There was a policy, but it wasn’t really a policy,” the Museum’s Head of Humanities, Professor John Carty, says of the Museum’s earlier stance on repatriation. “It was a document from 1987 saying, ‘We’d like to do the right thing, but it’s hard.’ It didn’t really commit to reburying people, didn’t commit resources or people to it, and was written before the Aboriginal Heritage Act. It was nothing, it was a piece of paper.”

If it was inadequate at its time of writing, that piece of paper is now well past its use-by date. And as recent years saw institutions from Sweden, Austria, England and Scotland return Old People, the apparent inertia of Australia’s biggest holder of Aboriginal ancestral remains was glaring.

“Historically, it’s the same in every museum,” Carty says. “Some of it is about ‘collectors’ of all kinds – anthropologists, trophy hunters, police, missionaries. People who were on the frontiers of developing colonial Australia were often curious about Aboriginal people, and they would use the bones of Aboriginal people as evidence of their difference. And often those remains would be sent to the Museum.”

Such attitudes reflect the spirit in which most western museums were established, a colonial paradigm that has taken decades to shift. “Museums began as places where people catalogued other cultures; you see that in our Pacific Cultures Gallery upstairs,” Carty says. “It’s part of that Enlightenment taxonomies of Europe, of seeing civilizations progress. And when you do that to living cultures, as we have done in Australia, there’s a real risk that museums hold people in the past.”

“The legacy of people like [Smith] is one that this museum, the universities, the whole town of Adelaide has to reckon with,” Carty says, “because it was people in the medical fraternity, the morgues… it was a systemic process of wherever Aboriginal graves were disturbed, rather than that being a reason to stop a development, the remains from those processes end up going to the Museum.”

It’s an important point: the transgressions of men like Smith are shocking today, but account for a relatively small proportion of the 4600. Many more were disturbed by land clearing, civil and private construction projects or members of the public – a confronting consequence of modern South Australia that many don’t realise exists. After all, there are few more powerful, tangible reminders of the scale of the colonial project’s dispossession of First Nations, and its overwriting of one culture with another, than the wholesale disturbance and removal of generations of buried ancestors.

“It’s kind of the story of building this town; this is a story that everyone who lives in Adelaide is complicit in, if not in the creation of it but the resolution of it, and the reconciliation that needs to come from reburying people,” Carty says. “Which is the work that we have to embark on now.”

In August 2018 at Tennyson Dunes, Newchurch (alongside a contingent of Kaurna, Ngarrindjeri and Narungga representatives) led the reburial of two Kaurna Old People returned from Sweden. Watched and supported by a diverse crowd of stakeholders and community members, the reburial demonstrated how culturally and logistically complex the work is. To return these 4600 will require coordination and real investment from state, federal and local governments as well as the community.