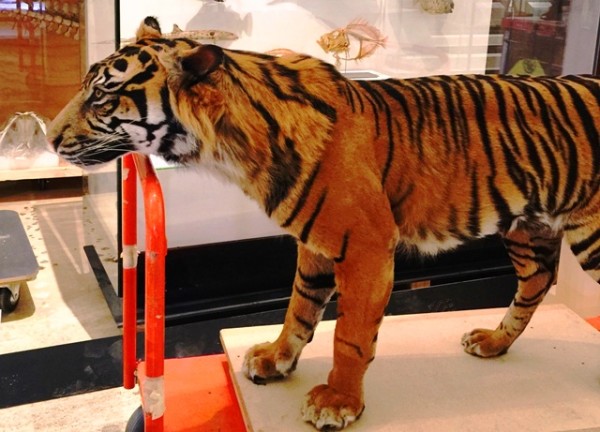 Fake rhino toes, an aardvark nose-job, a reattached penguin head. These are just some of the awesome things to try and spot at the Australian Museum’s school holiday exhibition Wild Planet.

And preparing the show has been just as fun and interesting as viewing the finished product. After all, it isn’t every day one has the opportunity­ to give a rhinoceros a pedicure.

For Megan Dean-Jones, materials conservator at the Australian Museum, it was just one of a long list of jobs as she prepared animal specimens for exhibition in the museum’s new Wild Planet gallery.

Wild Planet is a new permanent display of 400 extinct and endangered animals from the museum’s collection, from tiny insects to birds, fish, primates, mammals and a giant whale skeleton.

Some of the stuffed specimens in Wild Planet date from the 1880s and have been in storage for decades.

That, and the less than sophisticated taxidermy methods of yesteryear, left some looking a little worse for wear — enter Ms Dean-Jones.

“This is a fabulous opportunity for us as conservators, we can now use all the modern techniques to make the specimens look great,” she said.

The rhino repair involved using the intact feet as a guide and fashioning replacement toenails from balsa wood, gluing them in place, making a pulp of Japanese tissue (a paper made from vegetable fibres), sculpting it to the correct shape and, once it was dry, painting it to match the surrounding area.

Ms Dean-Jones also created rhino horns as the originals were removed and are kept under lock and key because they are so valuable.