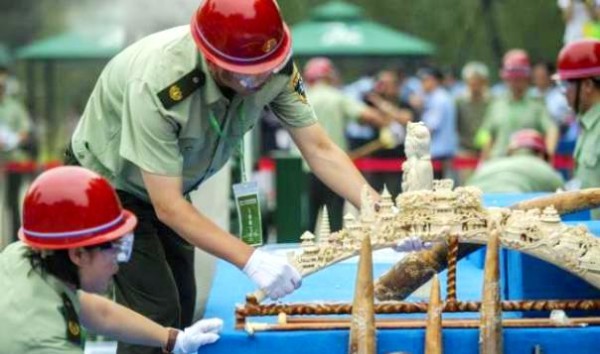 Workers put ivory items on a sliding belt before being destroyed in Beijing on 29 May 2015. Source: AFP.

Museum professionals trying to come to grips with the scale of risk of their collections might well pay attention to the scale of the problem of wildlife trafficking itself. Earlier this month, an enormous crackdown on illegal wildlife and wildlife products shines a light on the scale of the issue.

A global crackdown on wildlife trafficking has netted “huge” amounts of whale bones, rhino horn, ivory and other contraband, leading to hundreds of arrests, European and Asian authorities announced Thursday. Operation Cobra III saw police in 62 countries swoop on suspected wildlife smugglers between mid-March and May, European police agency Europol said in a statement. The operation, which was “the biggest ever coordinated international law enforcement operation targeting the illegal trade in endangered species” yielded “huge amounts of wildlife contraband,” said Europol, which is based in The Hague. The Association of Southeastern Asian Nations’ Wildlife Enforcement Network (ASEAN-WEN), which helped organise the operation, reported “over 600 seizures of assorted wildlife contraband” and at least 300 arrests. The suspects included eight alleged smuggling kingpins, including a Chinese national involved in Namibia’s biggest rhino horn smuggling case and a notorious elephant poacher in India, ASEAN-WEN said.

In Europe alone, police recovered 11,439 dead and live specimens, including 20 kilos (44 pounds) of live leeches in Bulgaria and 10,000 dead seahorses and 400 tortoises in Britain, Europol said. Seahorses in particular are prized as aquarium animals, ornaments or used in traditional medicine. Around 20 million seahorses are estimated to be traded every year for traditional Chinese medicine, according to Endangered Species International. In Spain, police seized 90 kilos of coral and animal horns and heads and a further 25 kilogrammes of coral were netted in Bulgaria. In India, nearly 11,000 kilos of suspected tigers’ bones were found. Chinese and German police meanwhile confiscated around 800 cactus plants, while 50 kilogrammes of unworked ivory were found in France and 16 whale ribs were discovered in the Netherlands.

In Thailand, police in April netted more than four tonnes of ivory hidden in containers originating in the Democratic Republic of Congo and destined for Laos.Thai police again seized more than three tonnes of ivory a week later in a second haul, this time from Kenya and again destined for Laos. The 511 pieces of ivory was found in a container “marked as tea leaves transported from Mombasa, Kenya,” Thai customs officials said. The shipping of ivory has been banned since 1989 under the Convention on International Trade in Endangered Species of Wild Fauna and Flora (CITES) and the tusks are worth millions of dollars (euros) on the black market.

Elephants and rhinos are mainly poached in Africa and India and their tusks and horn sent to South East Asia. While tusks are used in a “long tradition of ivory carving”, powdered rhino horn is used in traditional Asian medicine. “Sales generate significant profits for the organised crime groups involved,” Europol said. “Investigations continue in many countries,” it added.Europol, which supported the operation, said COBRA III was organised by ASEAN-WEN and the Lusaka Agreement Task Force, consisting of seven African countries.”The trafficking of endangered species remains a problem in the EU and beyond,” Europol’s director Rob Wainwright said.”Operation COBRA III once again shows the true global dimension of these crimes,” he added.”We will continue our efforts to fight these cruel crimes, to ensure a safe environment for endangered species in Europe and all over the world.”