DNA-based forensic science is at the forefront of solving wildlife crimes and is currently undergoing a transformation.

Wildlife forensic science is the science of identifying wildlife involved in crimes including the illegal poaching, possession or trafficking of protected and endangered animals and plants.

Illegal wildlife trafficking is a multi-billion dollar industry that threatens the survival of many species around the world, and with the increasing profile of wildlife forensic science there is movement to streamline protocols and practices so they are more aligned to those used in human forensic science.

Unlike human forensic science, which deals with a single species (humans!), wildlife forensic science is complicated in that it deals with thousands of species (think parrots, orchids, rosewood, reptiles, mammals, corals and snails). Simply figuring out what species is involved in an alleged crime can be quite a challenge, but is required before offenders can be prosecuted, as it must be established which legislation they have breached. In these circumstances an accurate and reliable identification is needed.

In many wildlife forensics cases, DNA analysis is the primary tool used for identifying species. DNA techniques can also be used to tell what region or population the animal came from, and whether the animal was wild-caught or captive-bred (via pedigree analysis). This information can be vital for not only prosecuting criminals, but also gaining a better understanding of the illegal wildlife trade.

As wildlife forensic science strives to reach a professional standard on par with human forensic science, scientific practices and procedures need to be standardised so there can be confidence that they are reproducible, reliable and robust.

The future for wildlife forensic science looks bright. There are already a skilled group of analysts conducting this work worldwide and providing their expertise to the legal system. To date there have been some large penalties handed down in court, one notable recent one being Operation Crash in the United States. 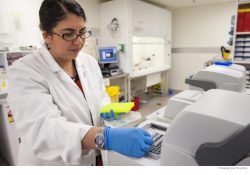 Greta Frankham in the DNA Lab at the Australian Museum. Photo: Stuart Humphreys. Source: Australian Museum
Positions Vacant » View All
» Team Leader, First Peoples Art & Culture – TMAG
» Booking Services & Rostering Officer – SLM
Latest News » View All
AWM Council elects Kim Beazley AC as new Chair
bringing 'impeccable record of public service' Read more.
Dion Pieta director appt to grow Te Ao Māori
perspectives & business at Univ of Auckland Read more.
Apollo awards 2022 shortlists announced
- awards ceremony in London 6-December Read more.
Egyptian archaeologists discover new Queen
tomb of a previously unknown queen Read more.
Ötzi Iceman narrative revisited & rewritten
- spring death & ice movement? Read more.
Top +
Council of Australasian Museum Directors c/o Mr Brian Oldman, South Australian Museum PO Box 234 Adelaide, South Australia 5001 Australia, © CAMD 2022
Copyright: All information and resources provided on this website remain the copyright of the Council of Australasian Museum Directors. Permission is granted for viewing and downloading for personal and not for profit purposes. Those wishing to reproduce any materials for commercial, educational or other uses are requested to contact us.
Disclaimer: The content of this website is provided for information purposes only and is not intended as a substitute for professional advice. No claim is made as to the accuracy or authenticity of the content of the website. The Council of Australasian Museum Directors does not accept any liability to any person for the information or advice (or the use of such information or advice) which is provided on this website. The information on our website is provided on the basis that all persons accessing the site undertake responsibility for assessing the relevance and accuracy of its content. No responsibility is taken for any information or services which may appear on any linked web sites. Hostgator.
.