You are here: Home » Articles filed under: 'News' » Article: 'Will Covid-19 force museums to reevaluate'

Will Covid-19 force museums to reevaluate 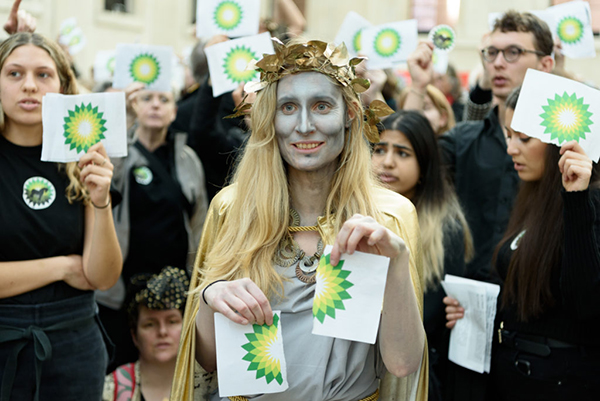 Photos of the mass action at the British Museum by Ron Fassbender.

Dan Hicks, Before the Lockdown, the Public Was Agitating for a Revolution in the Way Museums Operate. Will This Crisis Finally Force Through Change?, ArtNet News, 13 May 2020

A curator at the Pitt Rivers Museum explores how the current moment may force museums to reevaluate their fundamental ways of working.

In the early evening of Wednesday, February 26, the crowd thronged the opening of “Young Rembrandt” at Oxford’s Ashmolean Museum. We shook hands and brushed shoulders, air-kissed or embraced our friends, and leaned in to continue conversations as the director’s welcome rang through the thick atmosphere of wine and canapés. Today, to our immense collective sadness, through the time-warp and culture-shock effects of lockdown, our sociality of just a few weeks ago feels like a half-remembered dream of some distant ancient culture—one with radically different attitudes toward bodily contact, public health, and freedoms of association and assembly. In our absence, the galleries have gathered dust, reduced to mere storerooms.

When we finally unlock the museums, how will be find them transformed?

From comparable parts of the economy—the tourism, aviation or hospitality industries, for example—we learn that the COVID-19 era may accelerate certain structural changes that were already in process. The weekend before “Young Rembrandt” opened its Oxford chapter, Meta Knol, the director of the Museum De Lakenhal in Leiden, the Netherlands, which had hosted the first stage of this traveling exhibition, published her reflection on the so-called “Year of Rembrandt” that overtook 2019. Knol’s assessment of this celebration of the 350-year anniversary of the painter’s death, titled “Blockbuster Addiction,” was unequivocal. “This was the last time,” she wrote. “It really can’t go on.”

As cultural workers have adjusted to home-working, furlough, and home-schooling while trying to keep their mental health together, these past few weeks have also provided a time for reflection. Knol’s words have frequently come to mind. The future of many museum operations—events, education, outreach—could hardly be more uncertain. Careers and livelihoods are on the line.

A sense of precariousness is not unfamiliar to museum workers who were already living through austerity, Brexit, and the deregulation of the workforce. But long before this current health crisis, the skepticism about whether commercially-driven blockbuster exhibitions could ever plug the widening gaps in public funding for museums was already part of a much bigger existential question: Is the dominant model for 21st-century museums sustainable? 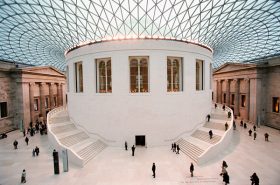 The concept of the “universal museum” was thought up by a group of museum directors as a coping mechanism for a prior crisis at the start of the millennium. In November 2002, the declaration of “the importance and value of universal museums” recast the most powerful cultural institutions of the Global North as custodians of world heritage, instruments of cross-cultural contact, and engines of destination tourism as the post-9/11 aviation industry sought to get back on its feet. As preparations for the 2003 Bush-Blair invasion of Iraq advanced, the British Museum forged a new corporate partnership with oil giant BP, and a light was shone on forgotten connections among extractive industries, militarist colonialism, and the public display of cultural property.

In the COVID-19 era, a different, more forensic light is now being shone into these vast storehouses, the self-styled “universal museums”—revealing fatigue in their shallow ideological foundations. First, social distancing throws into relief the absurdity of the hyper-concentration of cultural heritage in just a handful of metropolitan galleries, in the name of accessibility to an “international” public. Second, travel restrictions expose the short-term quality of an institutional financial model based on infinite growth in globe-trotting visitors. Some have even suggested that budgetary pressures will lead to deaccessioning and sales of artworks by museums, which would, in a stroke, remove the third remaining leg of the universal museum stool: their claim to safeguard culture for all humanity.

Social distancing and travel restrictions have exposed this fatigue, and are precipitating processes of rupture, but here coronavirus is a catalyst rather than a cause. A diminished airline industry and a revolution in working from home may have arrived sooner than expected—but neither comes as a surprise. And as a result, the model of the “universal museum” has failed. 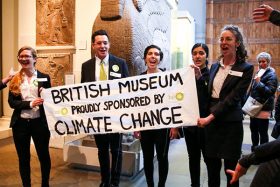 This failure is one of economic resilience, but it also shows a loss of social legitimacy, as we see most clearly in the field of colonial restitution where the shaky moral justification offered for exhibiting world culture in a few Euro-American capital cities disintegrates as people stop flying. Over two decades, our most powerful institutions have promoted the hyper-centralization of the arts and heritage sector. In the UK, sustained cuts to local museum services have served to lock in an unsustainable reliance on domestic as well as international travel. The hubris of the richest institutions has maximized, rather than mitigated, the museum sector’s vulnerability to finding itself on a disorderly front line, alongside the airlines and the oil industry, as the world catches up with the reality of Net Zero and starts to reassemble a new green economy.

The reality that preceded the coronavirus was already a period of reflection and scrutiny and far from a Golden Age for Europe’s museums. One major outcome of the Rembrandt-packed exhibition year in 2019 was for the very notion of the Golden Age to be called into question, since it serves to whitewash the ongoing legacies of slavery and colonial violence.

Then, just days before “Young Rembrandt” opened in Oxford, on February 7 and 8, the British Museum witnessed the largest protest in its 267-year history. #BPMustFall climate activists staged an extraordinary, peaceful occupation with a wooden Trojan Horse to oppose BP’s sponsorship of the exhibition “Troy: Myth and Reality”; in doing so, they joined the dots between the fights for decarbonization and decolonization. Museums’ universalist model of blockbusters was being questioned, including the green-washing of disaster capitalism that bankrolls it, the carbon footprint that lies behind it, and the ongoing geopolitical history of inequality and dispossession that sits beneath it. 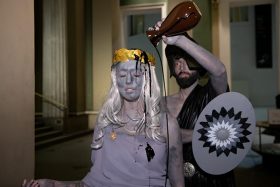 Activists from BP or Not BP protest at the British Museum. Photo by Ron Fassbender.

The world has never needed museums more than it does today. Before the present crisis, a new kind of humanism was already emerging as curators sought to reframe their role as carers for people, communities, places, and environments rather than just conservers and presenters of objects for fleeting global audiences. In her article, Knol from the Museum De Lakenhal called for museums to start “telling local stories with a universal appeal, not as an expression of provincialism, but explicitly because we need to find new ways to understand the world.” The Ashmolean’s Rembrandt exhibition closed within its first month, but it can now be visited online. Such digital innovation will without a doubt proliferate and evolve—but that’s just one part of the story. The improvisations now required of us are not dress-rehearsals for the changes that climate emergency demands, but urgent and necessary first steps in navigating sweeping structural change.

We can no longer justify these concentrations of art, heritage, and culture in just a handful of metropolitan institutions, where so little is on display. Cultural funding and objects must now be equitably redistributed and no longer be used to prop up the most powerful museums. At this tipping point, let’s rebalance the value that we afford to smaller museums, those outside of the wealthiest capitals and in smaller cities and towns, as well as across the Global South, where museums are already being reimagined as human processes rather than bank vaults. Let us learn from and invest in non-universal museums that sustain different human worlds, environments, and communities, “multiversal museums” that care for people before caring for objects and that are unique public spaces for building communities.

As the culture shock of these times sinks in, we must not cling to the failed model of infinite visitor growth, but begin cultural redistribution and de-growth that builds more equitable global futures through art and heritage. A new sense of scale and a new ethos of humanity, resilience, justice, remembrance, equality, restitution, environmentalism, and care were already emerging in the museums sector. These values must now be the building blocks of our collective future.

Dan Hicks is an archaeologist, art historian, anthropologist, professor of Contemporary Archaeology at the University of Oxford, curator at the Pitt Rivers Museum, and a Fellow of St Cross College, Oxford. Dan’s new book The Brutish Museums: The Benin Bronzes, Colonial Violence and Cultural Restitution is now available for pre-order from Pluto Press. Twitter: @ProfDanHicks