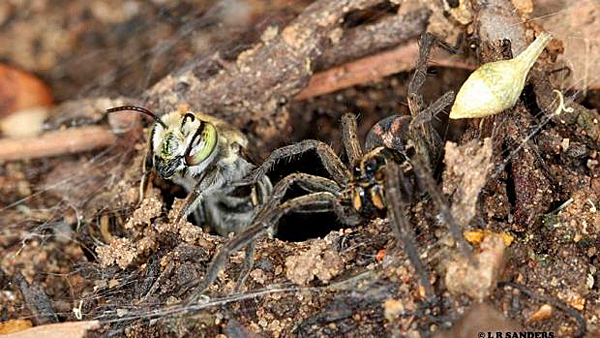 The leafcutter bee and wolf spider checking out the surrounds. Photo: Laurence Sanders.

An amateur photographer has captured the rare moment that a bee decided to move in with a wolf spider in central Queensland.

Laurence Sanders, 61, was walking through the botanical gardens at Emerald earlier this month to take some pictures of jumping spiders when he spotted something out of the corner of his eye.

“I was just walking along looking in the leaf litter and I noticed some movement. I saw a big hole and something must have dived down there,” he said.

The Queensland Rail employee decided to investigate further and laid down on the ground to watch the hole up close and see what would come out.

“All of a sudden something just shot out and all I could see was a white blur,” he said.

“I jumped back because I am shit-scared of spiders; I thought it was a bloody spider.”

As he waited, he saw a wolf spider climb out of the burrow and at the same moment, a bee carrying a leaf enter the burrow.

“I thought, holy shit! I was that excited I phoned up the wife to tell her,” he said.

“I couldn’t believe this wolf spider didn’t eat this bee.”

Mr Sanders captured the rare relationship over two days and uploaded the pictures to social science website BowerBird where Victoria Museum curator of entomology Dr Ken Walker told him the cohabitation was possibly a world-first.

Queensland Museum arachnid expert Robert Raven said a spider sharing its burrow was “bizarre” but he could recall an instance in Queensland where a gecko had shared a burrow with a spider.

“It is sort of like a lion sharing a den with a mouse,” he said.

The burrow-share of the “unlikely bedfellows” was even stranger given wolf spiders were “highly voracious and predatory”.

“When wolf spider babies are on the back of their mother, (she) carries them around for seven days (but) once they leave her back, they each become food, for both each other and her, within seconds.

“So it is a run for your life (situation) … because mum is going to get you.”

University of Queensland entomologist Dr David Merritt said the bee was a solitary leafcutter bee that searched for hollow, and usually empty, spaces in which to build nests.

“The females cut leaves to create a nest for a small number of eggs she will lay, so they look for something that is longish and hollowish,” he said.

“The bee would be doing hundreds of trips over a couple of days bringing in a new leaf every time.

“First they go down as deep as they can and pack one of those circular profiles in and then they put more in and they will probably lay an egg and then put more in over that.

“You end up with this tubular layered structure made of leaves that are gradually dying out.”

Dr Merritt said perhaps the spider and bee had “become used to each other” enough to share the same space.

“Judging by the size of that spider it would be quite a task for it to grab that bee and it would get stung,” he said.

“Maybe it just puts up with the disturbance – in its little mind what is happening there is not something it would see as a prey, (rather) it would see it as a threat or as a nuisance.”

Dr Raven said it was possible the bee had managed to sweet-talk her way into the burrow.

“That a bee is comfortable is interesting. It has probably evolved some sort of special behaviour that placates the spider or maybe the buzzing is enough to keep the spider out,” he said.

“We have this phenomenon where we use an old 4WD idling to attract spiders to the truck and as I recall wolf spiders are not one of the ones that get attracted.”