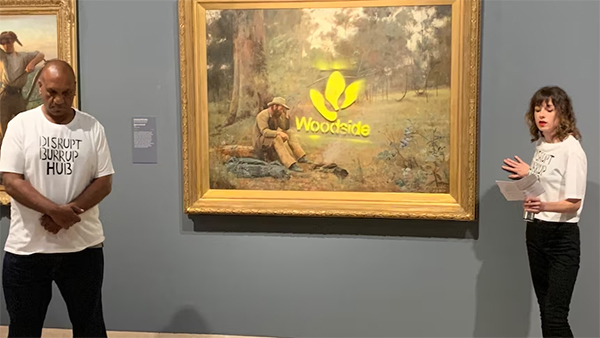 A 37-year-old woman is in police custody after she allegedly spray-painted over an iconic Australian painting by Frederick McCubbin in a protest against Woodside Energy’s $16.5 billion gas project in the Burrup Peninsula.

The woman, wearing a T-shirt with the slogan ‘Disrupt Burrup Hub’ allegedly spray-painted a stencil of the Woodside Energy symbol over the 1889 painting Down On His Luck at the Art Gallery of WA.

The work is considered one of the gallery’s most important paintings.

The Art Gallery of WA said in a statement the painting was protected by an acrylic covering and would not be damaged by the paint.

It confirmed one of the protesters also glued themselves to a wall inside the gallery.

“The protester has been removed from the gallery and the matter is now with the WA Police,” the statement said.

Another protester left the gallery at the request of security before police arrived.

Police said the woman in custody was assisting with their ongoing inquiries.

The statement said the protest was in response to “ongoing desecration of Murujuga rock art” in the Burrup area.

Woodside’s Scarborough gas project in the Burrup Peninsula, near Karratha, has been the target of multiple protests over concerns it will damage Aboriginal rock art in the area.

There are more than 1 million engravings on the peninsula, called Murujuga in local language, which is also the site of the Yara Pilbara fertiliser plant. 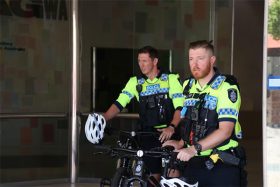 There are also plans for a new fertiliser facility in the area, owned by multinational group Perdaman.

If the project goes ahead the company plans to remove and relocate three sacred rock art sites from the Burrup.

A federal assessment is underway into how emissions from industrialisation of the area could damage the art, including ancient petroglyphs.

The protesters also laid the Australian Aboriginal flag on the floor at the gallery as they spray-painted the artwork, one of the best-known in Australia.

Mr Blurton said in the statement that Indigenous artwork and cultural heritage must be protected.

An independent reporter is visiting the region to see what impact emissions are having on the rock art.

Perth Lord Mayor Basil Zempilas said the city had a “truly great museum” which was no place for this type of disruption.

“There are lots of ways in our great democracy that you can protest lawfully, but to protest unlawfully in that manner has no place,” he said.

“I know that the people of Perth will be rightly outraged with what they have seen.”

The incident is the latest example of activists targeting valuable and significant artworks in Australia and around the world.