May 5th, 2022 | Browse other: News. | Tagged with: King’s College London, Remote working: the future of work or just shirking from home? | 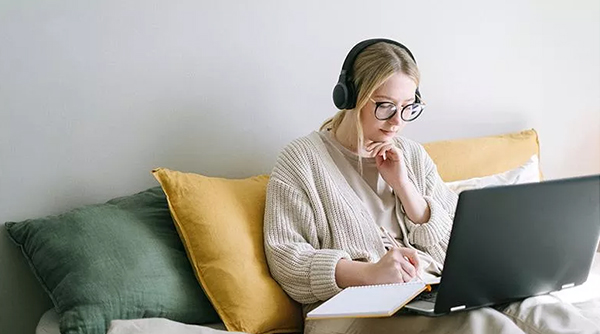 Covid-19 has triggered a working from home revolution, but how has this new way of working impacted productivity?

Working from home during the pandemic has significantly impacted the economy in both the UK and internationally, but it certainly didn’t dent one sub-sector: the Opinion Factories. These have been working overtime, either in support of, or opposed to, the idea that working from home (WFH) or hybrid working, as experienced during the pandemic, should become a permanent feature of our economic system. 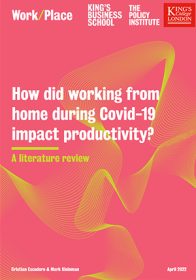 How did working from home during the Covid pandemic impact productivity? (1.43 MB PDF)

Proponents of decentralised working argue that the city centre and mass commuting model is not a universal norm to which we will speedily return post-pandemic. Rather, it should be seen as the last gasp of an outdated, 18th and 19th century model of industrialisation, unsuited to today’s knowledge-driven advanced economies. For most of human history, work took place in the home, rather than in a separate location that workers had to travel to. Better ways can, and must, be found for today’s and tomorrow’s workers to balance the demands of work and home, and policymakers and business leaders should be at the forefront of promoting individual and community wellbeing alongside a productive economy.

Ranged against these “new paradigm” advocates are the sceptics. Their arguments are an interesting mix. First, that the benefits of “agglomeration economies” – connectivity, proximity, serendipity – have not disappeared and the economic success of big cities in particular depend upon them. Secondly, that a WFH model, if universally adopted, would act to the dis-benefit of younger workers, who would no longer learn in situ from their more experienced peers. Third, it could create new inequalities, including on a gender or ethnic basis, around a division of labour between those who are able regularly to attend the workplace being seen by, and interacting with, senior management, and those  toiling alone on their laptops at home. Fourth, that a permanent reduction in the daytime population of central business districts would deal a heavy, perhaps fatal, blow to sectors such as hospitality and retail which rely strongly on commuters. And finally – expressed more sotto voce – that a distributed model makes management control and hierarchical organisation more complex, more difficult, and more expensive.

Can independent research shed any light on this noisy trading of opinions?

As part of a new project at King’s College London, Work/Place: London Returning, we have reviewed the existing literature on one very important facet of this debate – the impact of remote working on productivity. You can read our review in detail here.

What did we find?

The first two approaches show a mainly negative relationship between WFH and labour productivity during the pandemic, while the self-assessment approach reports mixed results. Hence, the results seem to imply that a return to the workplace is necessary to recover economic performance. This is consistent with other evidence about the impact of epidemics. Indeed, the World Bank estimated that the epidemics since 2000 (SARS, MERS, Ebola and Zika) reduced labour productivity by a cumulative 4 per cent over three years.

However, if we look beyond productivity, the shift to WFH has had an impact not just on labour outputs but also on workers’ wellbeing, particularly with regard to work-life balance. At least some of these workers, who have actual (not theoretical) experience of WFH or hybrid working as an alternative to the office-based model, will be reluctant to return to the pre-pandemic norm. Thus, the preferences and perceptions of employees, as well as the investments made by organisations during the pandemic, suggest that WFH is here to stay as a permanent option in the work dynamic. At the same time, we need always to remember that for large numbers of workers – almost certainly the majority – WFH or hybrid working is irrelevant, as the nature of their work requires them to be at the workplace.

What does this mean for policymakers and business leaders? First, they should be sceptical of general claims being made about the impact of WFH on productivity, either in a negative or positive direction. Rather, they should evaluate carefully the desirability or otherwise of encouraging or mandating either a “return to the office” or the permanent adoption of distributed (hybrid or WFH) practices. Second, they should accept that this will be, in management-speak, an iterative process – there will be a lot of trial-and-error in finding out what works for specific sectors, and for individual firms. And thirdly, and more broadly, the challenge of hybrid working needs to move out of the domain of opinion trading, and into the world of practical policymaking and workplace practice, balancing the needs of businesses and shareholders with the wellbeing, motivation and autonomy of workers.

The pandemic caught us all by surprise. There is no reason for the return (or otherwise) to the office to do likewise.