Media Release from the (Queensland) Minister for Science, Information Technology, Innovation and the Arts, The Honourable Ian Walker

The Workshops Rail Museum steams past one million visitors

A major arts and tourism milestone has been reached, with the one millionth visitor welcomed to The Workshops Rail Museum during its annual ‘Day out with Thomas’ special event.

Arts Minister Ian Walker said the museum was a big contributor to the state’s cultural tourism industry and was recognised with double silver wins in the 2013 Queensland Tourism Awards, in the Tourist Attraction and Heritage and Cultural Tourism categories.

“The multi-award-winning Workshops Rail Museum tells a unique story of Queensland’s history and this is a wonderful milestone to reach,” said Mr Walker.

“Places like the Rail Museum support the tourism industry, one of the four pillars of the economy that the Newman Government promised to grow.

“Rail also plays a huge part in the other pillars of agriculture, resources and construction and this museum demonstrates the pivotal role it has had in the state’s development.

“Many Queenslanders have a connection to rail, an industry which began in Ipswich in 1865.

“The large numbers of visitors and numerous awards are recognition of The Workshops Rail Museum’s longstanding role as one of the state’s most popular museums.

“It is also a great contributor to the Queensland Government’s Arts for all Queenslanders strategy, announced at the election, as well as the DestinationQ blueprint.”

“The Workshops Rail Museum is a significant attraction for Ipswich, being a must-do experience for arts, cultural and heritage buffs alike,” Ms Stuckey said.

“Tourism across Queensland is going from strength to strength under the Newman Government. I congratulate all volunteers and supporters on their achievement.”

The Workshops Rail Museum Director Andrew Moritz said the museum maintained close ties to the local community and was a key attraction for Ipswich.

“We’ve been passionately sharing the story of rail in Queensland for more than 10 years and we appreciate the continuous community involvement and support,” Mr Moritz said.

“The museum team has plenty more of the story to tell and we look forward to sharing it with many more visitors.”

For further information and ticket prices, phone (07) 3432 5100 or visit theworkshops.qm.qld.gov.au 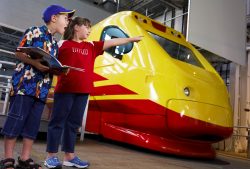 Tilt train at Workshops Rail Museum.
Positions Vacant » View All
» Kaituhi Maori / Maori writer – Te Papa
» Interpretive Planner – AWMM
Latest News » View All
Powerhouse’s 5 new exhibitions
Eucalyptusdom to Electric Keys Read more.
10 new art museums
Opening globally in 2022 Read more.
“Activating Smithsonian Open Access”
- new models for interacting with collns Read more.
Outback Museum of Australia, Charleville
$8.34M through in Building Better Regions Read more.
British museums face long Covid’s effects
visitation halves from pre-pandemic levels Read more.
Top +
Council of Australasian Museum Directors, c/o Ms Daryl Karp, Museum of Australian Democracy at Old Parliament House PO Box 3934 Manuka, Australian Capital Territory 2603 Australia, © CAMD 2021
Copyright: All information and resources provided on this website remain the copyright of the Council of Australasian Museum Directors. Permission is granted for viewing and downloading for personal and not for profit purposes. Those wishing to reproduce any materials for commercial, educational or other uses are requested to contact us.
Disclaimer: The content of this website is provided for information purposes only and is not intended as a substitute for professional advice. No claim is made as to the accuracy or authenticity of the content of the website. The Council of Australasian Museum Directors does not accept any liability to any person for the information or advice (or the use of such information or advice) which is provided on this website. The information on our website is provided on the basis that all persons accessing the site undertake responsibility for assessing the relevance and accuracy of its content. No responsibility is taken for any information or services which may appear on any linked web sites. Hostgator.
.