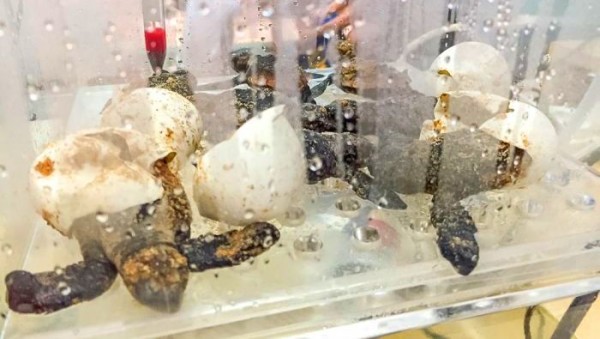 More than 50 turtle eggs are hatching for the audience at Queensland Museum. (612 ABC Brisbane: Jessica Hinchliffe).

Science is about to take over the streets of Brisbane, and the World Science Festival intends to attract even those who have never before set foot in a laboratory.

From March 9 to 13, the event will transform multiple venues into a scientific extravaganza.

This will be the first time the annual festival has been held anywhere other than New York City, and with more than 100 events scheduled over five days, the festival invites the whole family to join in the fun.

“The festival will showcase the very best science and scientists from around the globe through an incredible array of events where there will truly be something for everyone,” Professor Miller said.

Dinosaurs and aliens in the river city

The festival will cater for all ages, with outdoor cinemas and free kids’ movies, and discussions and debates held by world scientific experts, including stand-up comedian and astronaut candidate Josh Richards, and astrobiologist and planetary scientist Pamela Conrad.

Dinosaurs, robots, genetics, and the search for alien life are just some of the subjects contained in the festival’s program filling many of Brisbane’s streets, parks, museums, galleries and performing arts venues.

“Queensland Museum is incredibly proud to be presenting this world-renowned event here in our own backyard, giving us the opportunity to showcase the very best research taking place right here in Queensland,” Professor Miller said.

“We want everyone talking, doing and enjoying science.”

The agenda will also feature live performances, workshops and a free virtual reality experience of dinosaurs and prehistory.

“The World Science Festival Brisbane is an exciting opportunity for the city, and to be the first host outside New York shows we have a lot to offer in the science space.”

The festival, which began in 2008 to celebrate the exploration of science, is a production of the World Science Foundation, a not-for-profit organisation based in New York.