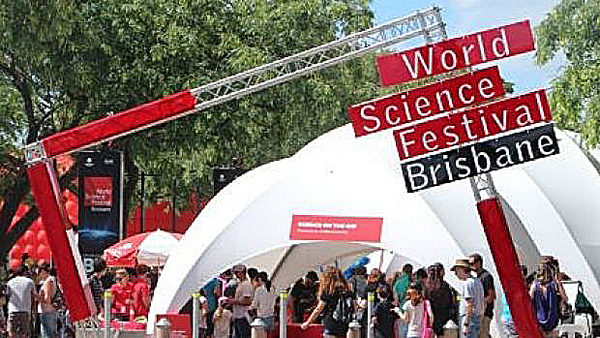 More than 100,000 attended the week-long science festival this year.

The imagination of some of the world’s leading scientists will again run free in Brisbane as the World Science Festival Brisbane 2017 program is announced.

The festival kicked off in Brisbane this year, the first time the four-day event has left its home in New York since its inception in 2008.

The streets of Brisbane were flooded with more than 100,000 people eager to soak up everything the festival had to offer and next year’s program looks set to raise the bar. The return of favourites such as Street Science! will feature alongside new theatrical performances, workshops, and debates on cutting-edge science and discoveries that are shaping our futures.

Festival co-founder Brian Greene, who was welcomed to Queensland by having a spider named after him, will return with Gravitational Waves: A New Era of Astronomy Begins to discuss, with Nobel Laureate Professor Brian Schmidt and creator of the LIGO Scientific Collaboration Professor Barry Barish, how a ripple in the fabric of space on September 14, 2015 can be used to explore the universe.

Australian Chief Scientist Alan Finkel and immunologist and former Australian of the Year Professor Ian Frazer will discuss the risks and rewards of long-term scientific research investments in We Don’t Know What We Don’t Know: Big Science, Big Rewards.

Discussions focused role of renewable energy and how science can save the ocean will be featured alongside The Future is in Good Hands, where the world’s greatest minds under 16 years of age will provide insights into the scientific leaders of tomorrow.

Brisbane is not the only Queensland city that will play host, with Queensland Museum CEO and Director Professor Suzanne Miller announcing the return of a regional program.

“I am pleased to announce we will again take the World Science Festival Brisbane into the regions which will include Chinchilla, Townsville, Gladstone and Toowoomba,” she said.

The World Science Festival Brisbane is presented by the Queensland Museum.