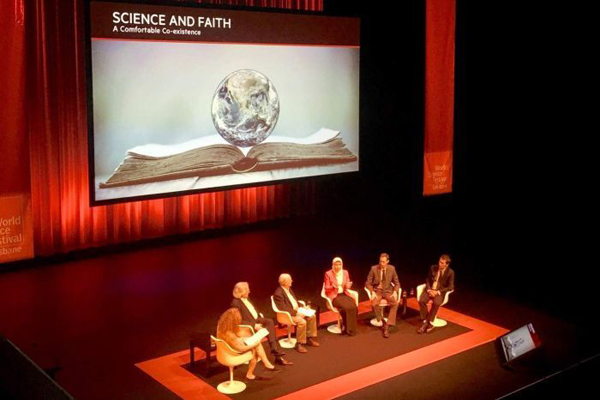 Fire and ice, black and white, hot and cold, science and faith.

As part of the World Science Festival, and in front of a vocal crowd, a team of experts bravely delved into the sometimes touchy intersection of science and religion.

“Many modern beliefs about the conflict between science and religion seem to have extended from our history,” she said.

“We live in a world where eight out of 10 people identify with a religion.”

Professor Grayling said he emphatically believed there was no such thing as a comfortable co-existence between science and religion.

“I did in fact question within myself why I’m actually here,” he said.

With laughter from the audience, he went on to explain how religion had hindered and obstructed the efforts of scientists throughout history.

But Dr Thomas Aechtner disagreed, suggesting a harmony between the two avenues could be possible.

“There may be a religious impetus to do science,” he said.

Dr Aechtner added some people might practice science because “God wanted them to”.

“I know that God exists, I’ve known that my whole life,” he said.

“I don’t believe there’s a basic conflict between science and religion.”

Professor Freeman concluded by saying the key to progress was communication, but this did not convince Professor Grayling.

“I think religion would do well to keep its hands off science,” Professor Grayling said.

This story is part of a collaboration for the World Science Festival between QUT and the ABC.